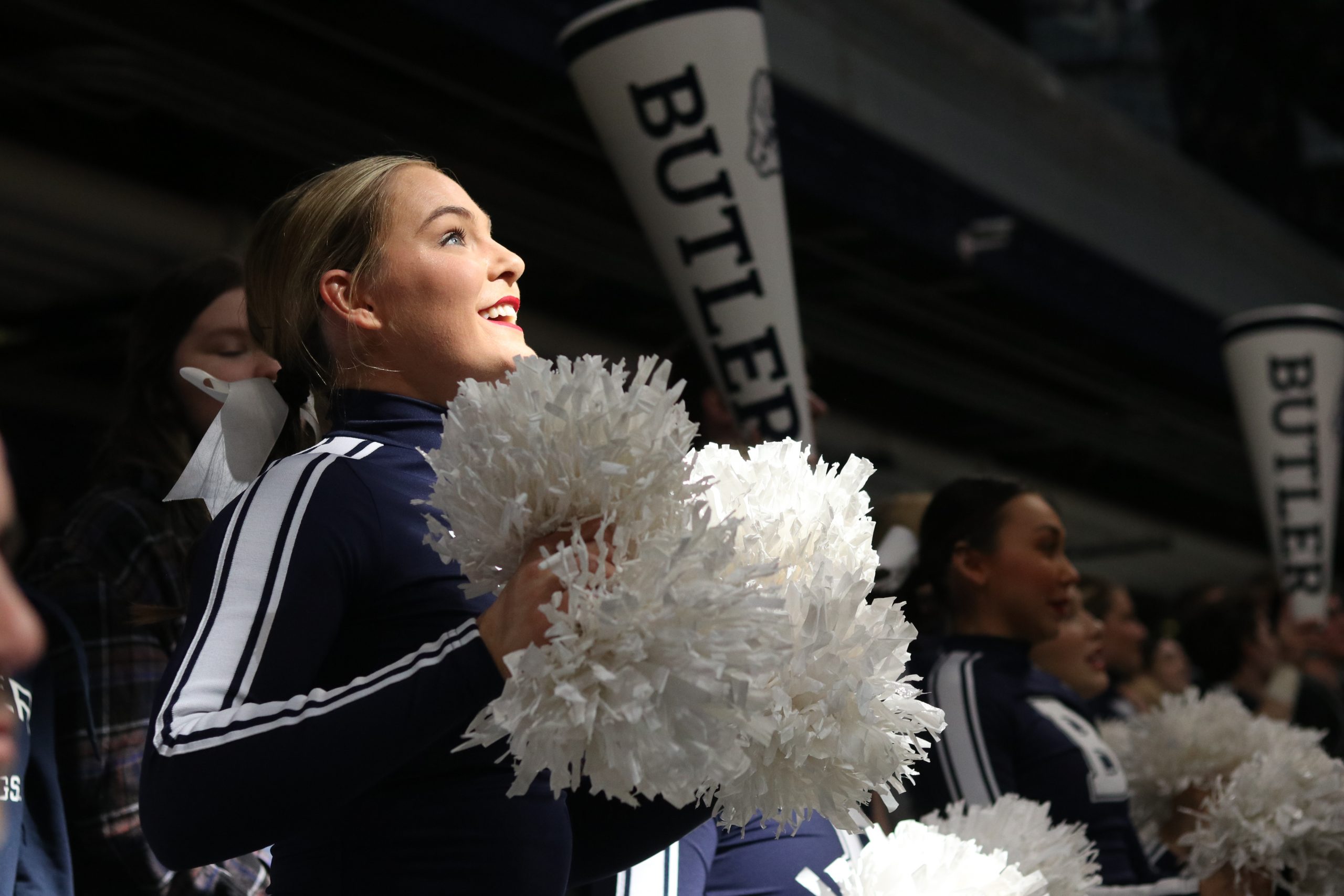 Freshman Jaclyn Lawrence cheers on the Dawgs as they took on Providence on Feb. 20. Photo by Francie Wilson.

Both the Butler dance and cheer teams will make their first ever appearance in Universal Cheerleaders Association & Universal Dance Association College Nationals in 2023, the teams announced on Feb. 21. The competition is slated to take place from Jan. 13-15 at the Walt Disney World Resort in Florida.

Cheer coach Brenda Jamerson feels the appearance could be important for the university as a whole, stating College Nationals are another way of representing Butler.

Similarly, dance coach Paige Camp — who previously participated in Dance Nationals with the University of Kentucky — shared her enthusiasm for her team accomplishing such a big feat.

“From my standpoint, I think it’s very cool to see how far the program has come in such a short time to where I feel comfortable that we would do fairly well and have a very good showing at UDA Nationals,” Camp said. “So I think it’s a step in the right direction.”

The event will consist of 123 total cheer teams from 44 states. All colleges, universities and junior colleges within the country were eligible for bids.

At Butler, both the cheer and dance teams have undergone improvements in recent years. Senior Marissa Lane gave her view on how her coaches have sparked a change within the cheer program.

“I think coaches [Jamerson and  Cole Bonewit] took the program in a different direction, and started to grow in a more competitive nature,” Lane said. “They have held us to a lot of high standards, but ones that are not unattainable, but keeping us on our toes and keeping us motivated to keep progressing.”

Sophomore cheerleader Anna Greiner added that the coaches have made improvements to the attitude and morale of the team, and more specifically, the gameday culture.

“I think Coach [Jamerson] has really emphasized the gameday portion of cheerleading and our school spirit,” Greiner said. “Not just the competition aspect, which has really made us have an appreciation for our school, our athletic department and our teams here.”

While the dance and cheer teams already practice and perform numerous hours every week, with their eyes on Nationals, members of the teams expect the practice schedule to change. Junior dancer Lexi Schell believes that practices will be more intentional as the team prepares for Nationals next year.

“I think they are going to be more disciplined and I do think we’re going to add time during the week,” Schell said. “Right now we’re spirit-based so a lot of our routines are designed to appeal to a large audience, a crowd and be more gameday focused. So I think we are going to see a big shift in style because we’re going to really hoan our technique and get back to those fundamentals of our jazz technique.”

While the success of Butler’s dance and cheer teams are no surprise to those who know the sports, this type of recognition came as a bit of a surprise — even to members of the team. Lane, who has watched the cheer program grow and improve over her four years, said that the team’s quick ascension to Nationals surprised her and some of her teammates.

“Since it came so fast, it was kind of a surprise and caught a lot of us off guard in a positive way,” Lane said. “I think it allowed the program to really grow and show the rest of the country what Butler University is all about.”

Lane is not the only one excited to see what exposure this may bring to the program. Junior  Kevin Stefanczyk explained the impact this experience could have on the cheer program.

The cheer program has already seen the impacts of the exposure from Nationals. In just a week’s time, they have already received questions about tryouts.

Much like the cheer team, the dance team also is excited for the exposure they will be getting on the national stage. Schell said that nationals can lead to larger awareness of the program and bring new members to the team.

“I think that getting our name out there is gonna be really big,” Schell said. “We really pride ourselves on hard work and unity, like in the classroom, but also on the court. So I think that we’re looking for girls that have integrity.”

Junior Giulia Chirco discussed what it meant to be a part of such a team.

“We’ve all taken tremendous pride in being a performance and spirit-based team here on campus up to this point,” Chirco said. “But I think that we’re excited and ready to continue that and to be exactly that on campus, but take that further and beyond, and out into the community, beyond Butler, and beyond Indianapolis.”