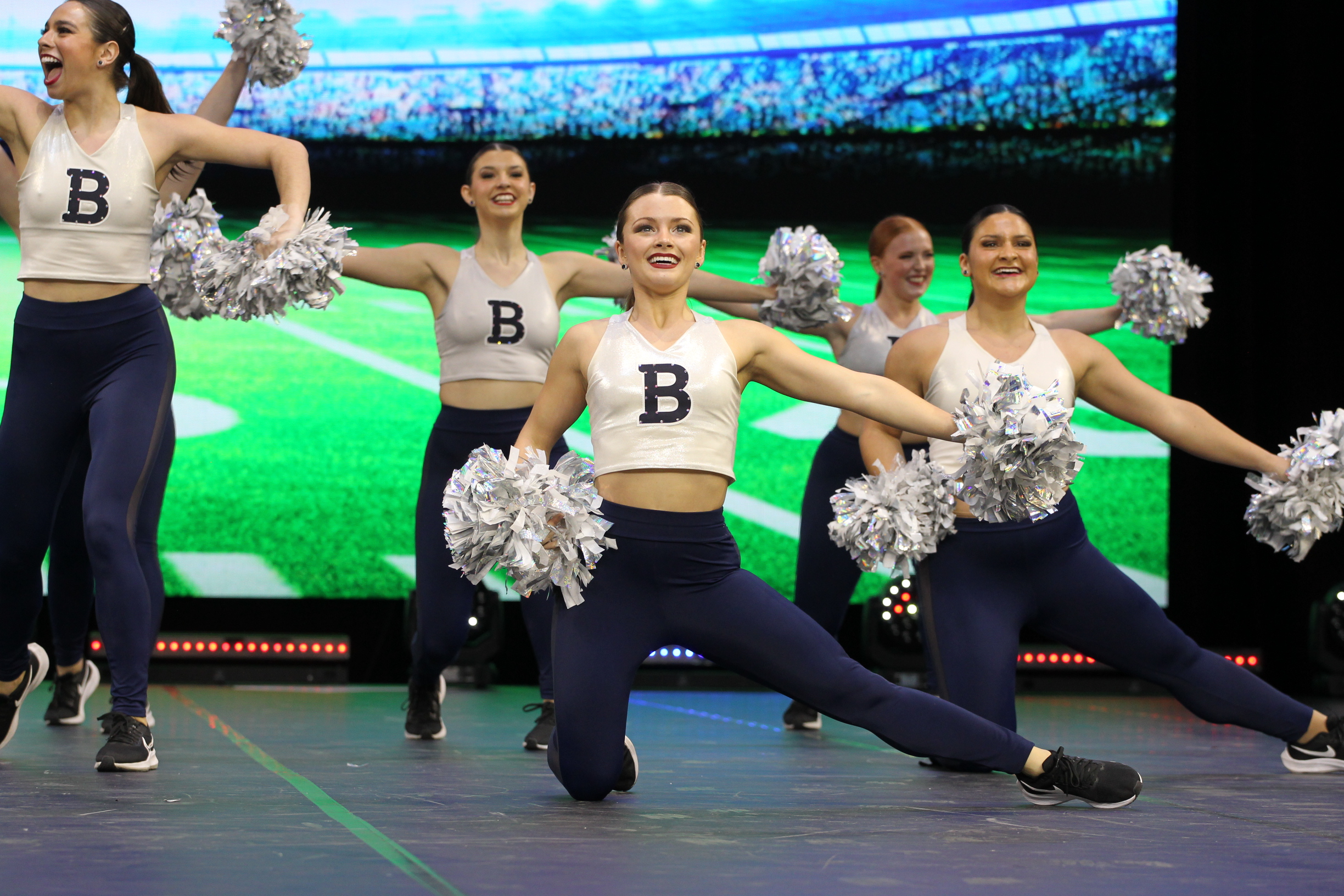 “Every step is a step closer.” That simple, yet powerful, phrase became the motto for 18 members of Butler’s dance team as they prepared for and competed at Universal Dance Association, UDA, College Nationals in Orlando, Florida Jan. 13-15. This was the first time the team competed at nationals, and they placed fourth in the “Game Day” category.

Head coach Paige Camp has been part of the program for five seasons — starting as an assistant coach before assuming her current role in 2019. Camp said she knew she wanted to bring the group to nationals when she started, but it took a few years to grow the program and garner support from all of the dancers.

Camp said the main goal of attending the competition was to bring a greater awareness to the program on a national level.

“I really wanted to go out and make a name for our university, for our team and just to really push Butler out into the dance team world a little bit more,” Camp said.

Butler’s dance team is a varsity sport. Auditions for the team are held in April. This year there are 32 members, and they practice two times per week. The dance team performs at all home football and basketball games in addition to select volleyball and soccer games.

Sydney Sutherland, a junior creative media and entertainment major, joined the dance team this year. She said competing at nationals was a unique opportunity for the dance team to dance for themselves rather than as part of other athletic events.

“We enjoy dancing at the games so much, and it’s a really great opportunity, but this was a great way to do something for us and work towards something that was acknowledging our skills,” Sutherland said. “And we were able to incorporate so many more technical aspects and difficulty than we would have been able to in a routine that we learned in a week or so.”

18 dancers competed at nationals. The 18 dancers were chosen from the 32-member team in late September. Over fall break, the selected dancers had a three-day intensive where they learned the choreography for their performance.

It was not until the end of finals week in December that the rigorous rehearsal schedule began. The team stayed over winter break and practiced between seven and eight hours a day. They had a few days to go home around Christmas, but then were back to rehearsal for the weeks leading up to their trip.

Most of the practices were held in Hinkle, but the team occasionally traveled to Avon High School to practice on the type of flooring they would be competing on. The team had their last practice in Indiana on Jan. 11 and then traveled to Orlando the next morning at 3:30 a.m. They had a rehearsal that afternoon and then rested for competition the next day.

The team first competed in the “Game Day” category. The routine consisted of various elements including the Butler war song, a band routine, a spontaneous component and a halftime routine. All of those elements came together to form one cohesive performance.

When they finished their routine, the team found out they made the finals. During a quick rehearsal they worked to apply the judge’s critiques and performed the routine again. It was after that performance that they placed fourth.

The team also competed with a jazz routine, but did not place in that category.

Lexi Schell, a senior speech, language and hearing sciences major, is one of the team captains and has been on the dance team all four years she has been at Butler. She said the team was very happy with the results, but were grateful for the experience regardless of their placement.

“I don’t think any of us went in with any expectations or anticipating placement at all, but we’re hoping that that’s kind of what makes us us and separates us from other collegiate teams who go just for the score, we were going for the experience, for the comradery, for the companionship and just to put Butler’s name out there, so we felt proud [for] doing that,” Schell said.

Sutherland said competing as part of a team was what made the experience that much more special for her.

“Being on a team was definitely my favorite part and understanding what a team is and how to work with a team,” Sutherland said. “Everyone was really, really motivated and really kind to one another. We all looked out for each other, [and] we were all there for each other because it definitely did get hard at some times. And then it made it that much more rewarding to celebrate as a team … we earned it as a team, and we worked for it as a team.”

The journey to nationals was not without its challenges. Three days before the team left for Florida, they had to rework their routines after a member got sick and was no longer able to compete.

Camp said the dancers worked through the challenges with a positive attitude and consistent support for one another.

“The girls never were upset, I mean, they were probably a little stressed that week, but they were really optimistic and everything that we threw at them, they toughed it out, and it all came together in the end,” Camp said.

Schell said as a senior, the experience gave her a deeper appreciation for her teammates. She appreciated their dedication and kindness throughout all the rehearsals and competition weekend.

“No one complained once, and it was rigorous,” Schell said. “Everybody had such a positive, can-do attitude … we got so close and everyone built each other up … I think we recognized that this was something bigger than ourselves. I think some people might see dance as trivial and still trying to make its way into the athletic space, but to us this was a really big deal and something that we put our hearts and our minds into.”

After taking a bit of time to reflect on a successful weekend, Camp said she hopes another nationals appearance is in the team’s future.

“I would love to go back, and I think the girls are wanting to go back as well, so we just have a lot of work in the off season to continue to fundraise for this trip and also to work towards all the things we want to accomplish at next year’s nationals,” Camp said.