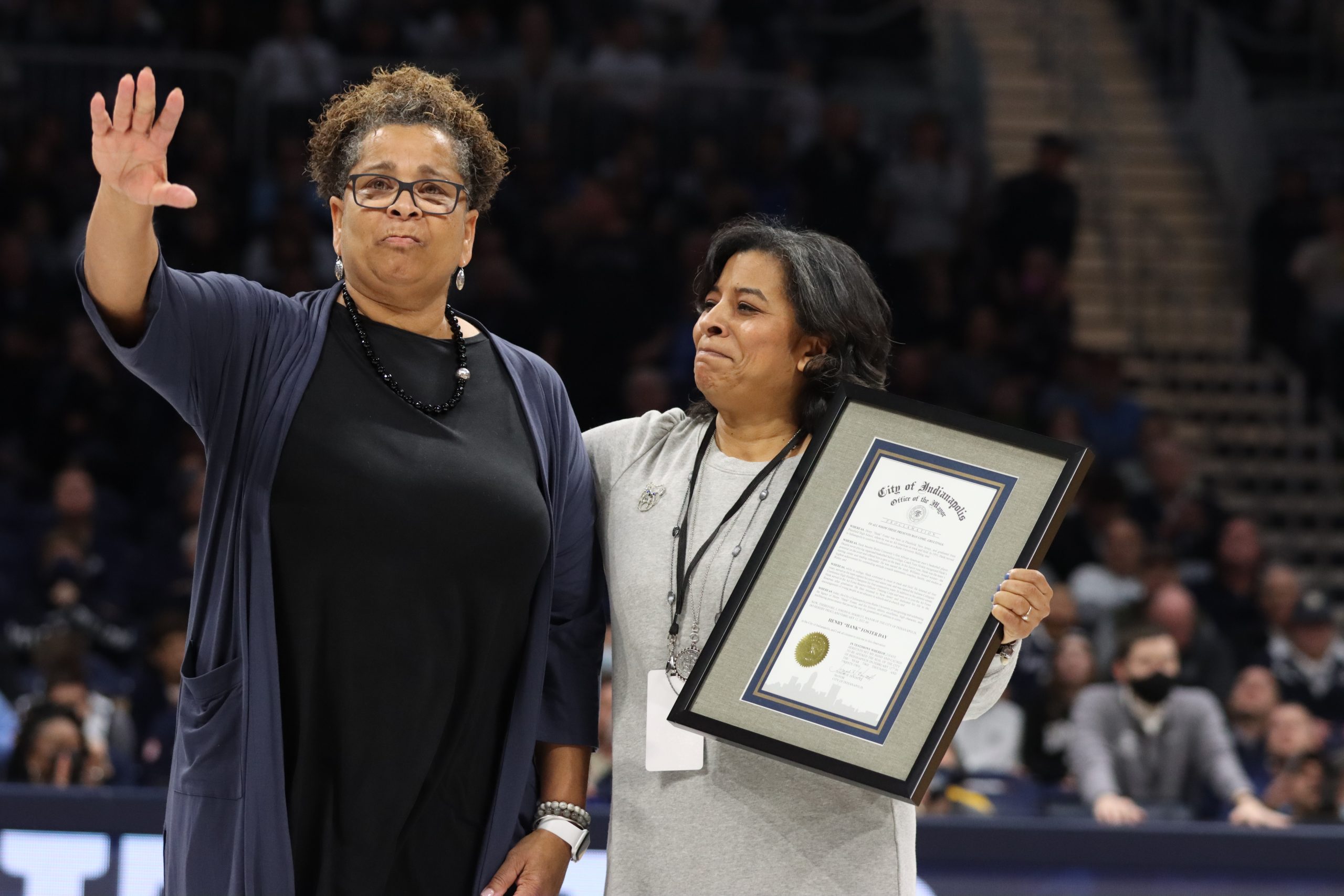 Marcia Foster, daughter of Hank Foster, stands next to Deputy Mayor Judith Thomas and waves in gratitude to the Butler crowd on Feb. 12. Photo by Francie Wilson.

Imagine getting on a train at just 18 years old and traveling almost 700 miles across the country. You have no luggage, barely any money, and no clue where you’re going to live once you get to your destination.

Now imagine doing all this as a 6-foot-4-inch Black man in Indiana in the year 1953.

This is what Henry “Hank” Foster endured as he made his way to Butler University. He could never have dreamed of the impact that he would still be making on his alma mater seven decades later.

Coming from Plainfield, New Jersey, Foster found a black family to rent from so he could have a place to stay. There was no Black Student Union or Hub for Black Affairs and Community Engagement for him to go to or lean on in times of need. Back then, going to school as a person of color wasn’t like it is now, especially at a predominantly white institution, or PWI.

Living in a constant state of racial bias and prejudice was something Foster and other African-Americans were used to. His daughter, Marcia Foster, talked about the experience her father lived through.

“Racism … that’s what life was,” Marcia said. “As a person of color, a man of color, he was raised to be strong and deal with things like that.”

To this day, Marcia still doesn’t know every detail about the struggles her father went through as a black man. Foster never liked to talk about the bad parts of his time at Butler, he was “all about positivity,” Marcia said. One thing she does know for sure: whatever obstacle got tossed her dad’s way, he persevered through it.

During his time in high school, Foster was an all-state track and field athlete. He was on the same team as Milt Campbell, a future Indiana University alum and the first black man to win a gold medal in the decathlon at the Olympics. Foster and Campbell had planned on going to school together but ended up choosing different schools instead.

Foster had never played organized basketball before stepping foot on campus. That changed when head coach Tony Hinkle — you may have heard of him — got a look at Foster and saw potential in the track star. Hinkle offered him a spot on the team, and that began Foster’s journey in the basketball program. By his junior year, Foster had become the starting center for the Bulldogs.

From 1955-57, he averaged 6.5 points per game and 7.5 rebounds per game. Outside of basketball, Foster was still excelling in track and field. He was a four-time 120-yard high hurdles champion in the Indiana Collegiate Conference, also setting a meet record of 15.0 seconds in the event. Additionally, he could high jump over 6 feet, 4 inches.

Foster was not only known for his amazing feats in sports, but also for his character. In his senior year, Foster was awarded the Andy Williams Award, given to those with outstanding attitude towards teammates, coaches, faculty and studies. Everything he did on campus, he wanted to do it to the best of his ability.

“He was a good man … he was a leader,” Marcia said. “He had a vision of what he wanted to do and he wasn’t going to let anything stop him from doing those things.”

Foster didn’t get through all of these challenges by himself, thankfully. While he was at Butler, he met his future wife, Sharon Enix.

Enix had gone to Spelman and the John Herron Art Institute prior to meeting Foster. Marcia described her as “creative, powerful and not afraid to speak her mind.” These were qualities she believes rubbed off on her dad and ones she inherited directly from her mother.

The two would get married shortly after graduation in 1957. Not long after that, Foster — who was in the ROTC program during his time at Butler — was stationed in the Air Force at a base in Texas. While other soldiers were able to leave the base on weekends to unwind and relax, Foster could not join them. Even though the Armed Forces had just been integrated not even a decade prior, it still was not safe for him to be out and about as a black man.

After serving, Foster returned to New Jersey to start a family. He had three children, Henry Jr., Marcia and Howard. Foster worked as a social worker, vice principal and principal of a middle school before retiring. He dedicated his life’s work to helping the community, especially children, and teaching the value of education. Marcia knew that was the legacy her father wanted to leave behind.

“His legacy was life through education, what education can do, and taking a stand when you are able and willing to take a stand,” Marcia said. “He was driven to live a life of service … he knew he had to be successful so that other people coming behind him would have opportunities.”

Foster passed away at the age of 84 on June 4, 2020. Before his death, Marcia said he still wanted to be active in the community, even though he physically could not do it anymore. He wanted to be out in the streets protesting during the resurgence of the Black Lives Matter movement in the summer of 2020 following the deaths of George Floyd, Ahmaud Arbery and Breonna Taylor. If Foster were still here today, his daughter believes he would be proud of the progress his alma mater has made over the years.

“I wish he could have been here at this time, but he would be so proud of the work,” Marcia said.

At the Butler-Marquette game on Feb. 12, Foster was able to get some of the recognition he long deserved. Along with Deputy Mayor Judith Thomas, Butler Athletic Director Barry Collier presented Marcia Foster with the proclamation stating the date would now be formally recognized as “Hank Foster Day” in Indiana.

Following the Bulldogs’ 85-79 upset win over Golden Eagles, head coach LaVall Jordan credited Foster with being a pioneer for the program.

“It was just an enjoyable moment, knowing that we were gonna pay homage to [Hank Foster] and all the other players that have played here,” Jordan said. “Somebody had to be the first to break the mold.”

Hank Foster will never be forgotten for the trail he blazed at Butler, not just for athletes of color, but people of color throughout this campus. And while that still might not be easy, Foster made it a little easier.