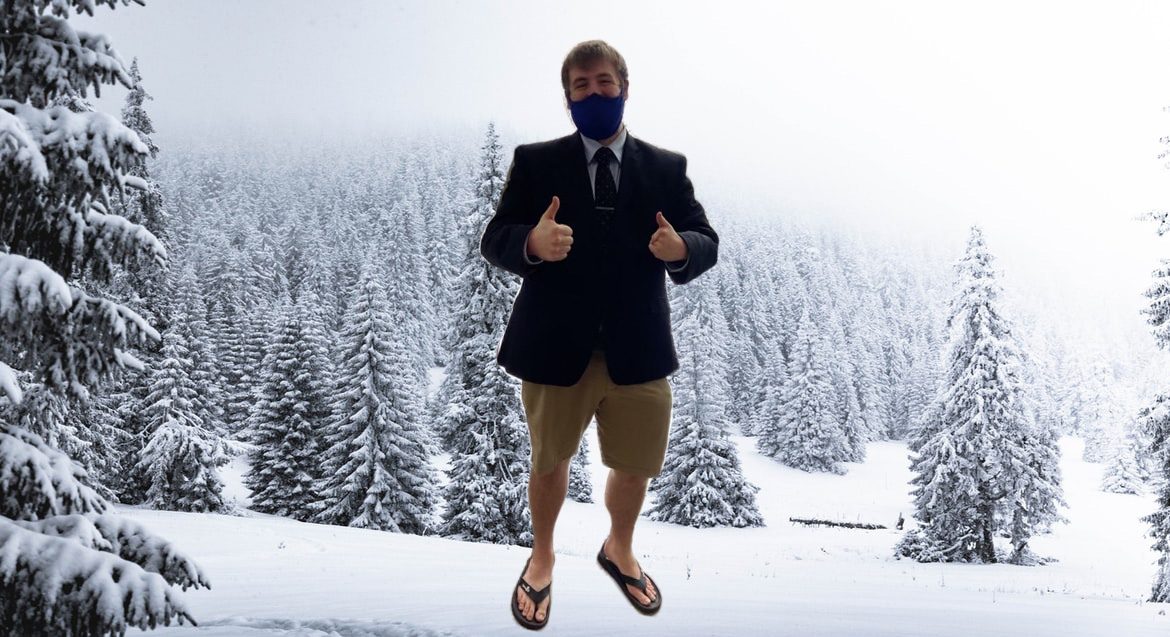 My Snapchat year-ago-today memories are fraught with selfies whose captions read “It’s freezing!” and “I hate the cold!” paired with temperature stickers of 40 degrees that expose my Southern soul. It is with this same Southern soul that I now quake in anger at those Butler students who boldly chose to trudge pants-less through the snow last weekend.

The devil’s dandruff began its descent from the clouds above Butler University late Wednesday night. I wore a jacket under my coat to make the short journey to Starbucks, and everyone there was just as bundled up.

Everyone except Max Lauerman, a sophomore finance and accounting major.

Lauerman wore athletic shorts and a long-sleeved shirt, and he carried an insulated zip-up hoodie for warmth. I checked my weather app in disbelief. It read “WINTER STORM WARNING,” with a windchill of 19 degrees. I needed to understand why anyone would wear such rebellious attire in the middle of a snowstorm, but Lauerman casually brushed off the issue of his shorts-wearing.

“It’s just kind of annoying to wear pants all the time,” Lauerman said. “Wearing comfy, longer pants makes me a little bit lazy, so I need to stay sharp and stay on my game.”

Sure, wearing sweatpants all day makes me feel like I’ve been asleep for 72 hours, but going through the day like a warm and exhausted zombie is far better than trudging about cold and shivering. If Lauerman is correct that laziness is a byproduct of warm legs, I am willing to sacrifice my energy for warmth.

Junior pharmacy major, Celine Kwan, also rejects pants. She instead opts for skirts and dresses, even in the winter. Kwan occasionally sits outside of Starbucks in a skirt or dress to do her homework in freezing temperatures.

Kwan’s ability to function in the cold is admirable, but her lack of leg coverage is appalling. The freshest air in the world could not keep me and my exposed legs in temperatures below 40 degrees for more than 30 seconds.

While freezing temperatures are my kryptonite, it seems that winter weather holds no power over Brandon Smiddy, a senior mechanical engineering and mathematics major and self-proclaimed “expert at wearing shorts in the winter.” I witnessed Smiddy’s expertise firsthand in class Tuesday afternoon, where Smiddy rocked a nice and breezy combination of shorts and flip-flops.

“I always wear shorts regardless of the weather,” Smiddy said. “In fact, I have yet to wear pants this winter.”

While I can’t fact-check Smiddy’s claim, I am confident it is true considering Smiddy also wore shorts and flip-flops on Thursday’s snow day. I, on the other hand, wore two pairs of pants, two pairs of socks, snow boots, a coat, a hoodie, a hat and gloves.

Despite their affection for bearing their legs in freezing temperatures, the frozen-legged folk occasionally encourage bundling up or wearing a coat. Kwan agrees that warm clothes are important.

“I’m not trying to prove a point that it’s not cold because it is cold,” Kwan said. “It’s freezing. Wear what you want to wear.”

Like Kwan, Lauerman will also go outside with exposed legs from time to time. This makes sense because the cold weather of Indianapolis pales in comparison to that of Lauerman’s hometown of Minnetonka, Minnesota. Still, despite his lifetime of experience with cold temperatures and his affinity for exposing his legs, Lauerman recommends bundling up.

“I’m not really acclimated to the cold, I would say,” Lauerman said. “I’m used to the cold, but there’s no way to get around it, so warm clothes [are] the only way.”

Lauerman and Kwan can tout the benefits of warm clothes as much as they want, but I caught them with exposed legs in the middle of winter. I won’t be deceived. There is a shorts-wearing epidemic at Butler University, and Lauerman, Kwan and Smiddy are super-spreaders.

Smiddy, our shorts-wearing “expert,” holds a unique opinion on the benefits of warm clothing.

“By the time you walk into your classroom, if you have pants on, you’re going to start to get extremely hot and be uncomfortable,” Smiddy said. “But if you had worn shorts you would have been perfectly fine.”

I’ll concede this point. The fickle heat in Jordan Hall leaves some rooms boiling while others remain an icy tundra. Should students bundle up to make the five-minute trek to Jordan, they would likely sit through an hour of Jordan’s unbearably hot air. For Smiddy, a frozen five-minute walk in shorts is worth an hour of comfortable temperatures in class. I, however, won’t be taking Smiddy’s advice anytime soon.

As for the physical health of our bare-legged friends, Smiddy assures me that he will be fine.

However, Kwan and Lauerman both allegedly wore pants in the snow this weekend, so perhaps Smiddy is alone in his ongoing battle against frostbite.

I was raised to associate bare legs with unavoidable pneumonia and hypothermia. My worst nightmare is not a pit of snakes nor is it falling from a great height. Instead, it is every Butler student waking up and deciding to wear shorts in 30-degree weather. As a self-proclaimed people pleaser, I would have no choice but to follow suit.

If students continue to abandon their pants at the rate I have witnessed, my nightmare lies only one pair of shorts away from reality.

There is a shorts-wearing epidemic at Butler University, but Smiddy disagrees.

“I think that it is not quite to the level of an epidemic yet,” Smiddy said.

The keyword is “yet.” Students of Butler University, beware. Leg-barers and shorts-wearers alike are preparing to spread their pants-less gospel to the masses.

I write to you in an effort to nip this nightmare in the bud. Please wear pants so that I can too. My grandmother recently texted me, “Be careful and bundle up!” Follow Mimi’s advice. Wear pants.

As for our pants-less proponents — where are they now?

Max Lauerman was seen wearing pants in Atherton on Thursday.

Celine Kwan wore pants for the snow this weekend.