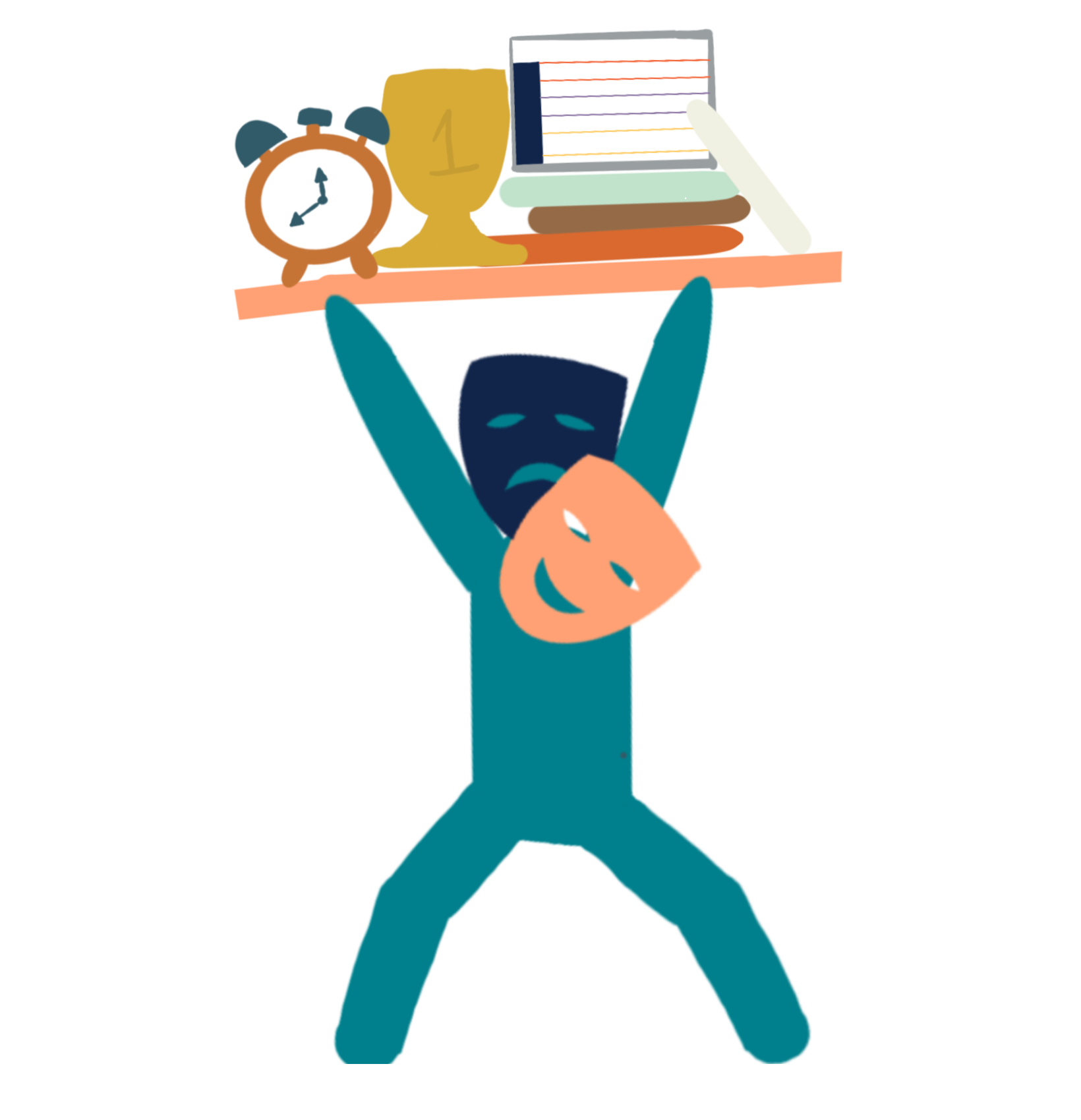 Butler students speak about the pressure they feel to succeed in a competitive college environment. Graphic by Lily Schneider.

Looking at her Instagram feed of smiles, celebrities and crowns, it’s hard to imagine what led former Miss USA Cheslie Kryst to take her own life on Jan. 30, 2022. Kryst’s mom, April Simpkins, said on Instagram that although it’s hard to believe, Kryst dealt with high-functioning depression, something she hid from everyone, even Simpkins, until very shortly before her death.

A former D1 college trackstar, practicing attorney and most recently a correspondent for Extra, Kryst’s death speaks to the disconnect that exists not only between social media and reality, but between success and happiness.

These differences, ones that can be hard to see as an outsider, are struggles some Butler students experience. Caught between achievement and fulfillment, students share how they deal with their mental health as they feel pressure from the world and themselves.

As Lauryn Lintner, junior marketing and international business double major, put it, Butler is a place filled with ambitious, high-achieving students. Lintner, sometimes called “Miss Butler” by friends for her active involvement on campus, said she puts immense pressure on herself to live up to people’s expectations.

Scared for people to doubt her ability, Lintner said she feels like she has to uphold a constant facade of happiness and confidence.

“So many people will say to me like ‘I don’t know how you do it Lauryn’ and I’m like ‘I don’t know how I do it either’ when on the inside I’m like falling apart,” Lintner said. “I feel the pressure from other people of like this is who you are, this is the name you’ve built, and that’s what you have to live up to. Of course I’m a perfectionist, and I want to live up to that, but it’s hard.”

Marcos Navarro-Garcia, a senior critical communication and media studies and Spanish double major, has made himself known on campus for his years of involvement and advocacy. Navarro-Garcia said he has often felt overwhelmed with his commitments on campus, but has learned to prioritize his passions when choosing what to be involved with.

“I’ve tried and learned not to lose myself in everything [I’m involved in] because when you leave in four to six years, depending on your degree, you’re going to have nothing if you don’t do stuff for the right reasons,” Navarro-Garcia said. “It’s ok to say no sometimes.”

High-functioning depression is not acknowledged as a clinical condition according to the Diagnostic and Statistical Manual of Mental Disorders, DSM–5,  which defines and classifies mental disorders. Although the manual has not been updated since 2013, some medical professionals still do not recognize high-functioning depression as a diagnosis because it often does not require the same level of treatment as major depressive disorder.

Psychology professor Dr. Joel Martin said although high-functioning depression doesn’t exist in clinical literature, he doesn’t consider it to be less severe than traditional depression. With a lack of research differentiating between the two, Martin said it’s important to realize that depression looks different on everyone.

“People suffer in silence all the time,” Martin said. “I think there’s sort of an image we have of what the typical depression looks like, and I think that image is often someone who’s just completely morose and nonfunctional, and that isn’t the norm. Most people who are depressed can function at least a little bit.”

Imposter syndrome is a condition around 25 to 30% of high achievers may suffer from. Going hand-in-hand with perfectionism, the syndrome refers to feelings of doubt or incompetence with one’s skills, talents or accomplishments. Often feeling like a fraud, those who live with imposter syndrome can fear being found out as undeserving or unfit of their accomplishments.

Mason Runkel, a junior healthcare and business double major, said imposter syndrome has been a new feeling for him this semester. Describing himself as a perfectionist who is often overworked, Runkel said he feels pressure, like Lintner, to live up to others’ expectations of him.

Runkel said although it’s usually easy for him to open up about his feelings, talking about his imposter syndrome has been different.

“Imposter syndrome has been something that’s been really big for me this semester, just like [questioning if] everything I’m doing is worth it, or if I am doing things as well as I could,” Runkel said. “It’s definitely been something that’s been a weird feeling to deal with and like I’m not as open about it as I am about other things just because I don’t want to seem ungrateful for what I have, or act like I’m going through all these problems when other people would really envy certain things that I’ve been able to be a part of.”

Kryst’s accounts show how easy it is to show only one side of the story and hide true feelings on social media. Lintner and Paul Ford, sophomore entrepreneurial and innovation major, agree that they typically only show the best parts of their lives on Instagram.

Ford said although it can be easy to get caught up in the illusion of social media, it’s important to realize that most of it is not real.

Outside of social media, Ford said although he has a support system he can lean on, he sometimes struggles to share his feelings in fear that doing so will change how people view him. Realizing that it’s not necessarily a good thing, Ford said he’s working towards a place of understanding and kindness towards himself.

“The more you feel something might affect you to let people know, the better you are at hiding it,” Ford said. “You become a pro, and that’s not a good thing … In my eyes, humility is one of the biggest keys to confidence, not saying that you have it all together but saying that it’s not all together and that’s alright.”

Martin said there are many reasons why struggling individuals do not reach out for help.  Perhaps individuals don’t think their problems are severe enough, that they shouldn’t take up resources, or they’re afraid of the stigma that exists around mental health issues.

Although almost half of adults who suffer from a clinical-level mental issue do not reach out for help, Martin said he thinks we are moving in the right direction opening up about mental health. Starting conversations about mental health, and suicide specifically, is one way we can continue to normalize mental health issues and show others we care, according to Martin.

“People are much more willing now to talk about their emotional and psychological health, and lack thereof, than they were as little as 10 years ago,” Martin said. “Suicide has been a really difficult issue to solve in psychology partly because it’s a really low base rate phenomenon meaning that it’s difficult to predict who’s going to do it and who isn’t … It’s definitely not a topic we like to talk about.”

For Lintner, she said she remains closed off about her feelings so others don’t have to go through the burden with her. Even with her mom, Lintner said there’s no reason to keep her up at night, instead she can deal with her problems on her own.

Lintner said she doesn’t like other’s help navigating her struggles because then it’s out of her control.

“Feelings are a tricky subject because I feel like I think all emotions are valid but my own,” Lintner said. “Everyone always says you need to treat yourself like you treat other people, like that is not true. I do not treat myself how I would treat other people. I would be the first one to stand up and help someone with their problem, but if it’s my own problem, I’m like ‘oh we’ll deal with that later, like it doesn’t matter, it’s not important.’”

For Runkel, he said he’s not afraid of being a burden, but more so afraid of being doubted for his abilities. Like Martin, Runkel sees people moving in a direction of more understanding and compassion when talking about mental health, but he still fears judgment.

“I wouldn’t consider myself someone who struggles with depression or severe anxiety and stuff, but if that were a problem I wouldn’t be afraid to talk about it because I think people understand it a lot more than they used to,” Runkel said. “I guess the only thing I’d be nervous about is if people would then look and consider me unfit for something I’m doing, or like think that I’m not able to handle some sort of position that I have because mentally I may not be ok.”

Navarro-Garcia said therapy has changed his life by giving him a space to freely express himself without fear of judgment.

“Therapy is great because it is a dedicated time for me to just talk without having a detrimental effect on the rest of my life,” Navarro-Garcia said. “My therapist is not my friend, so I can tell her anything without worrying about whether our relationship will be affected.  Verbalizing thoughts that run through my head is a healing process and helps me to keep my life on track without letting my emotions take over. I recommend anyone who has never tried therapy to do so because it has been a game changer for me in terms of being mentally healthy.”

If students feel they need a space to talk like Navarro-Garcia, resources and counseling appointments are available through Counseling and Consultation Services,CCS. Offering both private and group sessions, services are of no charge to Butler students. SGA also offers Uber rides to mental health providers off-campus if students choose to take advantage of their services.