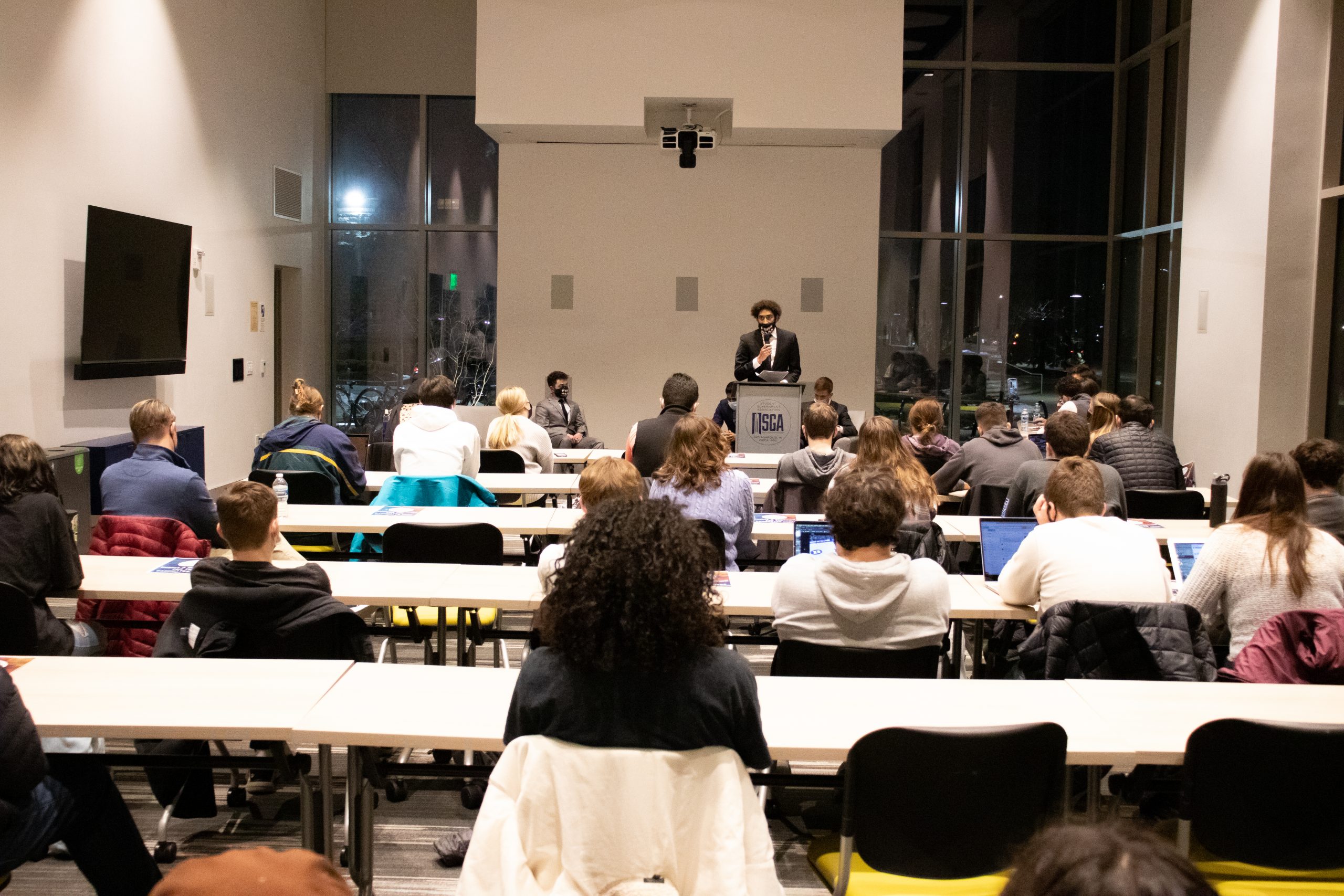 Students gather to listen to the SGA presidential election debate. The debate was held in the Irvington Community room on Butler’s campus. Photo by Ben Caylor.

Butler’s Student Government Association will hold elections on Feb. 21 for president, vice president and 18 open Senate seats. The results of the election will be announced Feb. 23.

Campaigning began on Feb. 13 and the presidential debate was held on Feb. 15. The debate gave the candidates an opportunity to argue their platforms in front of constituents. Some of the main issues brought up during the debate included how candidates will create relationships between student organizations and administration, transparency within SGA and how SGA can address mental health issues.

Ford, a sophomore entrepreneurship and innovation major who ran for president last year, has experience as a former senator. Ford was also a part of the Diversity, Equity and Inclusion commission and auditing board within the Senate.

Ford said he wanted to run for president because of his desire to make a positive impact on campus.

“SGA is a place where leaders around campus can come and connect with each other,” Ford said. “Regardless of what year or major you are, all these people are coming together through this organization to help make the Butler community better. I wanted to make an impact last year, I didn’t feel like I could. So I want to lead this organization so that everyone can.”

Daas, a sophomore finance major, was involved with the Diversity Center, and has held leadership roles in both the Students for Justice in Palestine and the Center for Faith and Vocation.

Daas said he wanted to be a part of this campaign because he believes heavily in the values of diversity, equity and inclusion. He emphasized the idea of having a student government that is diverse to include everyone’s opinions, and to have a voice for marginalized students who he believes aren’t usually taken into account.

Ford and Daas’ platform, A.C.T,  aims to push both administration and SGA to connect more with students.

“Achieving means just making sure that SGA continues to excel and grow,” Ford said. “Challenging means to challenge administration on their policies and the things they do that don’t work for students and transforming our culture to make it more inclusive.”

Daas said they will continue to be proactive and reach out to students, so it is not the students having to try to figure out how to get involved with SGA.

Both Ford and Daas hope that students understand that they intend to act on their promises.

“I want people to really see what we’re saying and see the change we want to make,” Ford said. “We don’t want people to think that we’re being flashy, or we’re winning a popularity contest, when we’re trying to win the hearts of students and show that we can make change on this campus.”

Chezem, a junior biochemistry major, was a liberal arts and sciences senator his first and second year. At the end of his sophomore year, Chezem was elected to his current position, Speaker of the Senate.

For Patel, junior health sciences and Spanish double major, the 2021-22 school year has been his first time being a part of SGA. He is a senator for Apartment Village and chair of the diversity, equity and student belonging committee.

The first pillar of their campaign, student life improvements, focuses on diversity, equity and inclusion, mental health and other student services. This includes an increase in transportation to places such as Broad Ripple, which they hope will expand upon the Uber program that is already in place.

The second pillar is the revitalization of campus traditions. Chezem said in the past few years, many traditions had to stop because of COVID-19.

“We want to bring back some civic engagement efforts …” Chezem said. “… working with Greek life, which is a fundamental tradition on this campus, Homecoming traditions, Yell like Hell, all those events that we have always had, that just don’t happen anymore.”

The final pillar of the platform is holding the university accountable. Chezem said there have been a lot of issues where Butler has not been very transparent and have neglected their duties.

The most recent example Chezem mentioned was during sorority and fraternity recruitment where, with less than 48 hours notice, Greek houses had to make decisions that changed how recruitment was run. Chezem emphasized how this was a grave neglect of duty in both his and Patel’s eyes.

The main goal of Chezem and Patel’s campaign is to be a voice for students and to follow through on the promises they make.

“I would say that the student body needs authenticity, transparency, dependability and resilience with a backdrop of a growth mindset in their candidates,” Patel said. “This is so that the candidates can not only serve the students for their current needs/wants, but also their evolving ones throughout the term.”

Both campaigns emphasized how important it is for them to engage with both student organizations and the administration to discuss student issues and how to resolve them.

Additionally, Meet Patel, running as vice president to Cade Chezem, spoke on the importance of transparency when communicating about SGA’s financial expenditures. Patel wants students to know not only what SGA spends money on, but what money is available to students through SGA.

Rami Daas, running as vice president to Paul Ford, said he wants to be more transparent and give students a way to see exactly what goes on in SGA behind the scenes.

Both vice president candidates described mental health as being an area of concern on campus. Patel said his campaign with Chezem aims to move forward with a research-based approach while Daas and Ford’s campaign aims to educate staff, such as RA’s and professors, on how to provide support for students.

Sophomore psychology major Katie Stanley is the chair of the Election Oversight Committee and serves as a justice on the judicial branch. Stanley is in charge of running candidate meetings where she goes over the rules and any questions candidates might have about the campaign process. She is also responsible for editing the election guidelines with a goal of making them more equitable.

COVID-19 caused changes to the ways in which candidates were able to interact with student voters in the past. Stanley said since student affairs has begun to loosen their grip on regulations, more in-person events have been scheduled for this election season.

There will be a candidate meet-and-greet on Feb. 17 at 7:00 p.m. in the Irvington Community room where students will have the opportunity to interact and talk with the candidates.

“It gives them the opportunity to at least pass through and talk to candidates,” Stanley said. “It lets them learn a little bit more about what the future representatives are passionate about and see if that’s who they want to vote for or if they align somewhere else.”

Lauren Stubbs, first-year psychology and political science combined major, was elected by the first-year class in the fall as one of the two first-year senators. She hopes to be elected for the class of 2025 in the upcoming spring election.

Stubbs said that for senators, a main form of campaigning is through social media. Candidates cannot use their personal Instagram pages for campaigns, they must make new accounts for their campaigns.

“I did [social media],” Stubbs said. “But I also chalked a lot in front of Irvington. And also just a lot of word of mouth … working it into conversation and that travels fast.”

Sophomore business major Wilson Riley said that he believes a candidate’s most important job is to represent the will of their constituents.

“Your job is to basically do the job that you were elected for,” Riley said. “All I ask … is that you do your best to carry out the wishes of those who elected you.”