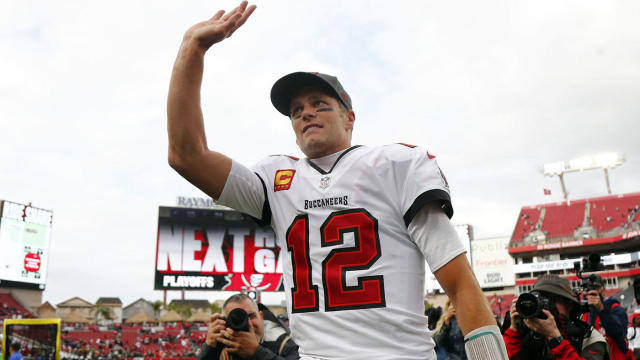 Tampa Bay Buccaneers quarterback Tom Brady walks off the field after a playoff loss to the Los Angeles Rams on Jan. 23, 27-30. Brady retires after 22 season in the NFL, leaving behind one of the greatest legacies in the game. Photo courtesy of Kim Klement.

Tom Brady officially announced his retirement on Tuesday, Feb. 1 after days of speculation and debate. It was initially reported Saturday that Brady was retiring, but Brady denied the rumors, stating that he was still deciding. On Tuesday, he made it official in a statement saying that, “it is time to focus [his] time and energy on other things that require [his] attention.”

Brady’s career achievements are unrivaled and he undoubtedly sits atop anyone’s list of greatest NFL quarterbacks. Furthermore, Brady is not only the best quarterback ever to play in the NFL, it can be argued that he is one of the greatest athletes ever to play a sport.

“Brady will go down as one of the greatest, if not the greatest quarterback in the history of the NFL,” said Gould.

Drafted in the 2000 NFL Draft in the 6th round by the New England Patriots, whom he’d play with for 20 seasons, before playing his final two with the Tampa Bay Buccaneers.

During his 22 season career, Brady won seven Super Bowl titles, six with the Patriots and one with the Buccaneers – the most any NFL player has ever won. Along with his championship titles, Brady also won three NFL MVP awards during his career.

In addition to his championships and personal accomplishments, Brady holds records for numerous NFL statistics as well. The most notable being most career touchdown passes, with 707, and most career passing yards with 97,569 total yards – both including postseason. Brady also has the most career wins of any player, with 277 career wins and has successfully beaten every team in the NFL at least once throughout his career.

Throughout his career, Brady has had numerous moments that defined his legacy. One of the more recent examples was in Super Bowl LI. Brady’s Patriots trailed the Atlanta Falcons 28-3 late in the third quarter. However, Brady managed to score 25 unanswered points to send the game to overtime. In overtime, Brady led a game winning drive down the field, giving the Patriots an improbable 34-28 victory and the first ever overtime game in Super Bowl history.

Another career highlight for Brady was his 2007 campaign that saw him throw for 50 touchdowns in the regular season – an NFL record at the time – and led the Patriots to a perfect 16-0 regular season record and an NFL MVP award. While the Patriots came up short in the Super Bowl, Brady’s impact in the 2007 season has yet to be forgotten.

Despite all of the accomplishments and winning Brady had throughout the course of his career, it didn’t come without some forms of controversy. During the 2014 NFL playoffs, Brady game under fire after it was discovered the footballs Brady used in the AFC Championship game significantly underinflated.

While Brady and the Patriots went onto win the Super Bowl that year, the incident, often referred to as “Deflategate,” became a source of debate among NFL fans for years to come.

Brady was eventually suspended by the NFL for the first four games of the 2015 NFL season, but was able to win his appeal and played all 16 games during the 2015 campaign. However, the NFL, who re-appealed the case, won, and Brady subsequently had to sit out four games to start the 2016 NFL season.

But unsurprisingly, Brady returned and led the Patriots to another Super Bowl title. It proved Brady can overcome all forms of adversity and still perform at a top tier level regardless of the circumstances.

“Brady’s seven accumulated Super Bowl rings, and plethora of other accolades suffice for a commanding legacy that will be discussed for decades to come,” said Gould.

Quarterbacks come and go throughout the NFL, and some will be elite, but only one can be the greatest of all-time – and that quarterback is Tom Brady.