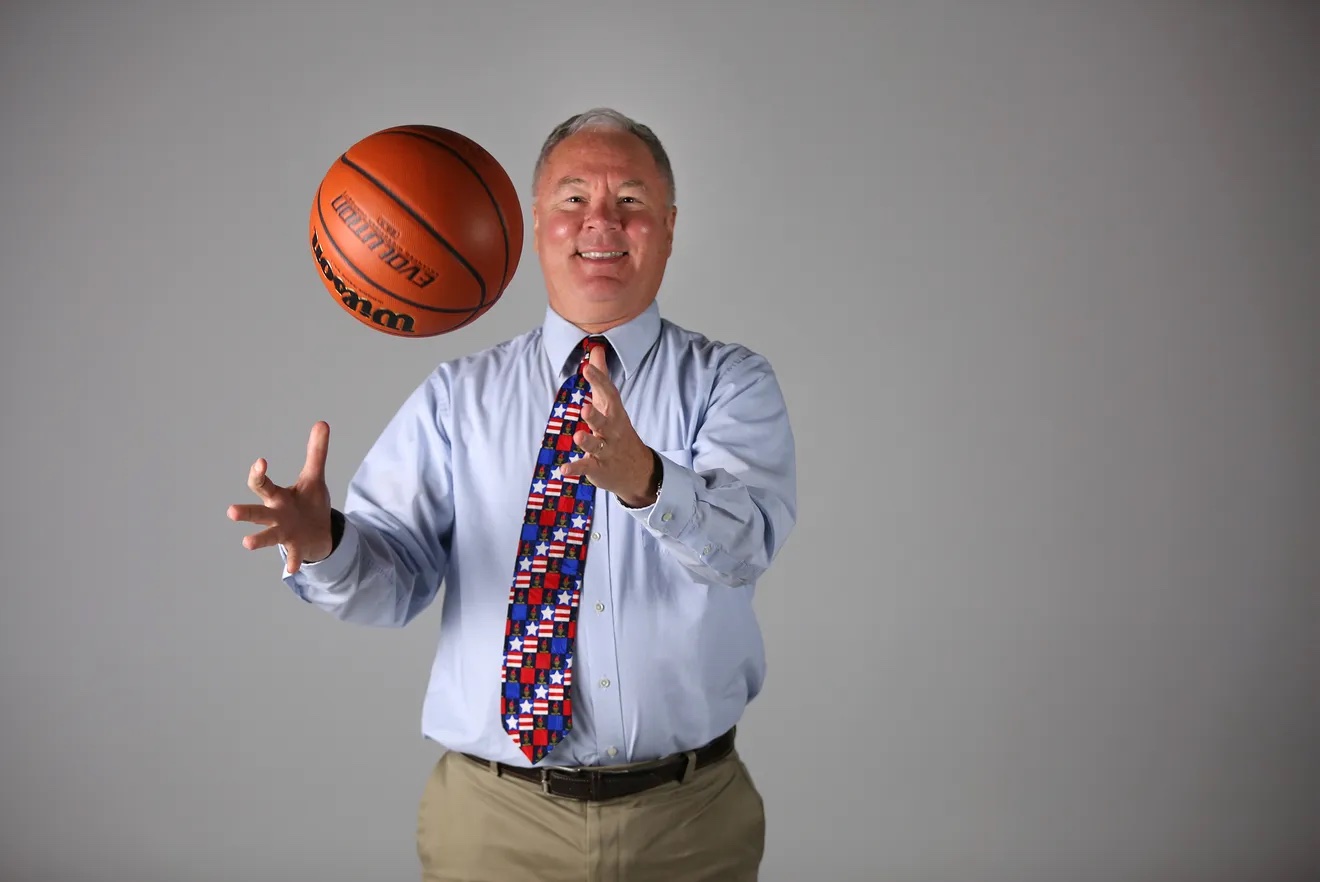 Indianapolis Star sports reporter David Woods will be inducted into the Indiana Sportswriters and Sportscasters Association Hall of Fame on April 10. Woods has been a reporter at the IndyStar since 1995 and served as the Butler men’s basketball beat writer since 2001. Photo courtesy of IndyStar.

While many successful names and faces have gone through the Butler men’s basketball program over the years, one man has remained for over two decades — and he wasn’t even born a Hoosier.

If you’ve opened up a newspaper or searched for news stories on the internet in Indianapolis over the last few decades, chances are you’ve read a piece written by David Woods.

As the beat writer for the Butler men’s basketball team for 20 years, Woods has become an essential part of the meteoric rise of the Butler basketball program, racking up numerous regional and national sportswriters awards along the way. Woods has had his sights on sports journalistic fame ever since the beginning.

Long before Butler made national headlines, Woods was just a young kid living in Urbana, Illinois with one big dream — to be a sports journalist.

“When I was 12, I would pick my own college football and basketball All-American teams,” Woods said. “I would assemble a little book using preseason magazines to cut up pictures of the players who made my All-America team and paste that onto each page.”

Woods’ passion for writing would carry on throughout high school as an editor for his school newspaper. Once college came rolling around, Woods would choose to stay in his hometown and earn a Bachelor’s degree in journalism from the University of Illinois.

Using all his prior experience, Woods earned his first job out of college at the News-Gazette in Champaign, Illinois as a sports writer and copy editor. In 1981, Woods took a chance to live across the country in San Jose, California and work for the Mercury News as a reporter and copy editor. He worked there for three years before returning back to Illinois to work for the News-Gazette in a similar position.

It wasn’t until June 1994 when Woods scored his first big gig at the Indianapolis News as a reporter. Despite earning a better job, Woods was stuck doing more desk work than writing and wishing he worked for a larger role at the newspaper.

“Two or three attempts to fight my way up to earning a writing job later, I had finally had enough,” Woods said. “I told the editors that I’m not applying to be a writer because I already am one.”

His wish would come true after the Indianapolis News and IndyStar newspapers merged to become the IndyStar in 1995 — creating more open positions. It wasn’t too long after when the new editors decided to take a chance on Woods. In 1997, he was awarded with his first shot as a beat writer for the Notre Dame Football team.

Woods would cover the team for five years until he got a call from one of his editors about a new opportunity. The IndyStar had fired the beat writer covering Butler basketball and they wanted Woods to pick it up for the rest of the season. He didn’t hesitate before accepting the offer.

“I have been really fortunate to be on the beat during such a momentous time for Butler basketball,” Woods said. “Butler won their first NCAA tournament game since 1962 the same year I joined, so I guess I got on the train just in time.”

Little did Woods know, this was only the beginning of some of the greatest moments in college sports history.

Over the next decade, the Bulldogs emerged as one of the most dynamic underdogs in college basketball — leading them to national prominence. In 2010, Butler would begin their historic rise winning their way to the NCAA National Championship game.

Woods said he felt a lot of pressure as the team reached new stardom.

“During the 2010 season, I had the Butler team to myself the entire season,” Woods said. “When they made the Final Four, it was like I was covering the New York Yankees. Every outlet in the country was covering Butler basketball.”

After the 2010 season, Woods began to make a name for himself. In 2011, he was recognized by the United States Basketball Writers Association for the best “game story” of the year. Players and coaches around the Butler program began to take notice.

“He probably takes as much pride as anyone that I’ve seen cover Butler basketball,” Graves said. “The easy thing is to always focus on the negative or whatever gets the most clicks, but I’ve always found that David was not always necessarily about clicks, but just trying to tell a really great story in the best light.”

Woods’ honesty and integrity in his craft began to grow his credibility amongst his colleagues at the IndyStar. Matthew Glenesk, sports content coach for the IndyStar, praised Woods for his versatility.

“He has helped wherever we’ve asked him to and he always did it enthusiastically,” Glenesk said. “He covered stories from the Olympics to airplane races at the Indianapolis Motor Speedway. He is so well-respected not just in our newsroom, but around the entire state of Indiana.”

Following back-to-back championship appearances, Woods was asked by a local and national publisher to do a special favor. Compared to his normal shorter articles, Woods was given the chance to write two books about the success of the Butler basketball team.

The first in 2009,  titled “The Butler Way” and then “Underdawgs” in 2011, published by New York publisher Scribner. Both books allowed fans to relive every moment during each historic run.

Graves believes Woods’ efforts to create each book are unforgettable.

“The details and the stories that he’s able to recreate and tell the story was really remarkable,” Graves said. “It’s going to be one of those books where when I’m retired and, you know, 20, 25 years later, those are the books I’ll be able to go back and read the stories and relive the great memories of that time.”

Head coach LaVall Jordan said he appreciates all the years of service Woods has provided to the Butler basketball program.

“It takes a lot of time and dedication to dive into all the history and stories from the players and turn them into a book form,” Jordan said. “We are thankful to have someone in his position for so long and to be able to create so many new fans of the program.”

Over the years, Woods added onto his role at the IndyStar by also becoming the beat writer for the Olympics and continued to rack up award after award for his sportswriting. However, he said nothing compared to the achievement he received this year.

Last month, Woods learned he will be inducted into the Indiana Sportswriters and Sportscasters Association Hall of Fame on April 10. Woods said he was shocked to see his name alongside some of the other spectacular sportswriters.

“I’m almost never at a loss for words, but I was pretty much speechless,” Woods said. “I’ve just been very fortunate to have such a long career doing something that I really love.”

Woods’s contributions as a sports writer for nearly 50 years have left an everlasting impact on not just Butler basketball, but sports in the Hoosier State.