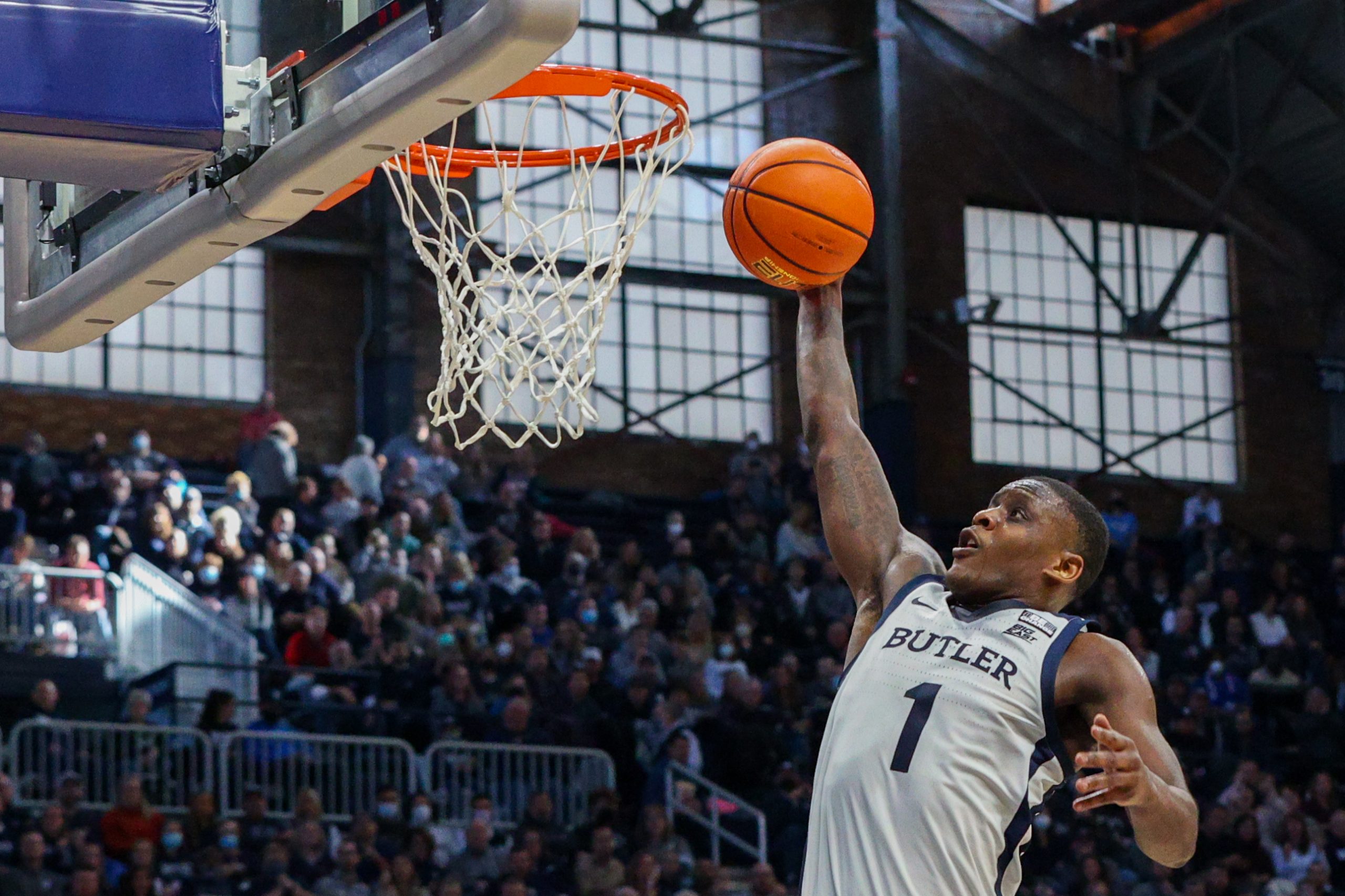 Guard Bo Hodges lifts off for a slam dunk against Georgetown on Jan. 29. Photo by Claire Runkel.

After falling just short of a comeback against rival Xavier, 68-66, the Dawgs are beginning to face the grim reality that their chances at a tournament bid are slim-to-none if they don’t find a way to go on a tear during the second half of Big East play. Fortunately for the Dawgs, their next opponent will be the St. John’s Red Storm — who only sit one game ahead of the Bulldogs.

That being said, the Dawgs shouldn’t take the Red Storm lightly, as their powerful guard tandem in junior Julian Champagnie and sophomore Posh Alexander help the Red Storm average an impressive 80.0 points per game. Butler’s defense will have to focus on slowing down the duo if they want to successfully protect their homecourt.

Here’s what you need to know ahead of today’s matchup:

For the Dawgs, the backcourt has provided most of the offensive production this season. Jayden Taylor, Chuck Harris, Aaron Thompson, and Simas Lukosius have all — one way or another — been pivotal in facilitating play making and getting points on the board.

So far, all four of Lukosius’s double-digit scoring games have come against Big East opponents — resulting in the Dawgs going 3-1 in those contests. If head coach LaVall Jordan can manage the front court in a way to always have at least two of his playmakers on the floor at all times, this can lead to an uptick in production and keep the Dawgs competitive on offense for all 40 minutes.

Backcourt is the engine to St. John’s high powered offense

If the Bulldogs want to get out of this game with a W, then they will need to shut down the Redstrom’s backcourt and force the ball out of the hands of Champagnie and Alexander.

While the Dawgs have displayed formidable defense from beyond the arc in recent games, their interior defense has been lackluster. Against Xavier, the Dawgs allowed 40 points in the paint, all while letting the Musketeers shoot 59% from inside the arc.

While St. John’s might not be as deadly interior scoring, they are certainly menaces when crashing the boards. The Red Storm is currently tied for No. 18 in offensive rebounds and rank in the top 50 for rebounds in the NCAA Division I — giving St. John’s bigs a tremendous edge against the Dawgs.

If the Dawgs want to prevent this high-powered team from turning this game into a track meet, then it’s essential that they crash the boards and prevent the Red Storm from earning any second-chance points.