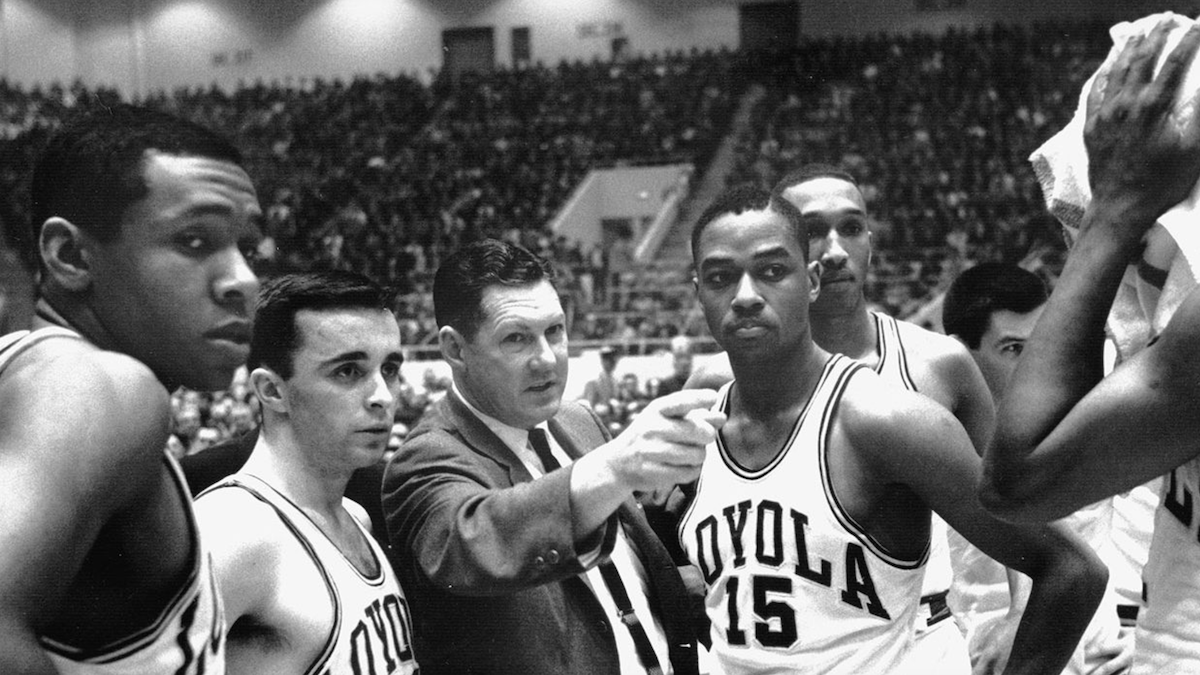 The integrated Loyola Ramblers made history playing the all-white Mississippi State Bulldogs in the midst of the civil rights movement. Photo courtesy of events.butler.edu.

In honor of Black History Month, the documentary “The Loyola Project,” telling the story of the 1963 matchup between the Loyola Ramblers of Chicago and Mississippi State University, will be shown at 63 college campuses across the country. The documentary premiered on Feb. 7 on CBS Sports Network.

Butler is one of three campuses in Indiana screening the documentary which will be shown at the Schrott Center for the Arts on Feb. 19 at 2:00 p.m.

In the midst of the civil rights movement, the Loyola Ramblers broke an unwritten rule that there were only supposed to be three Black players on the court at one time by starting four Black players and subbing a fifth in.

The Ramblers played the all-white Mississippi State University, who snuck out of Mississippi defying the state legislature to play an integrated team, in an NCAA Regional semifinal game. Loyola won the game 61-51 and the game has since been known as the “Game of Change.”

Graham Honaker, executive director of principal gifts at Butler, was doing research for a book he is writing about schools basketball changed for the better when he learned about the “Game of Change.” He reached out to the creators of the documentary to have it shown at Butler.

“I just think it’s a very impactful story in terms of its place, not only in college basketball history but really in sport and society,” Honaker said.

Honaker said although it may seem like this game happened a long time ago, there are still many people alive today who were around to witness it.

“We still have a long way to go in terms of civil rights and equality, but that game was really really important, and it’s overlooked,” Honaker said.

After the documentary, there is a panel discussion being held where attendees will get the opportunity to ask questions to two current student athletes at Butler.

Alani Hightower-Bend, first-year psychology major and member of Butler’s swim team, is one of the student athletes on the panel. Hightower-Bend said it can be difficult being a Black woman at a predominantly white institution.

“It’s definitely difficult being a Black woman, especially on a team full of white women,” Hightower-Bend said. “There’s times where I do feel isolated, and I don’t think it’s intentional, but there’s just times where it’s almost like I can’t share things in common with people so I just stay away.”

Although Hightower-Bend said she can sometimes feel alone as a Black woman on a team full of white women, she emphasized the importance of meeting new people and putting yourself out there.

“There’s a difference if you’re not being included, and then if you’re taking yourself out of the equation. Put yourself out there,” Hightower-Bend said. “If you have this mindset that everyone’s against me, or they don’t have everything in common it’s gonna be difficult to make friends … I definitely would give advice to go into [a team] with an open mind.”

Junior sports media major and football player Trey Mason is another student athlete on the panel. Mason said Butler has a problem with a lack of students of color, but he hopes everyone, himself included, can learn something from the documentary and panel session.

“Progression is obviously the ultimate goal,” Mason said. “But more than anything I think if you acknowledge a lot of differences and if you acknowledge how somebody else’s experience might be different from your own, that’s how you truly make progress.”

Attending the documentary also counts as a BCR credit for students. There is a Google form where you can RSVP for seats, but there are no purchases or tickets necessary to attend.