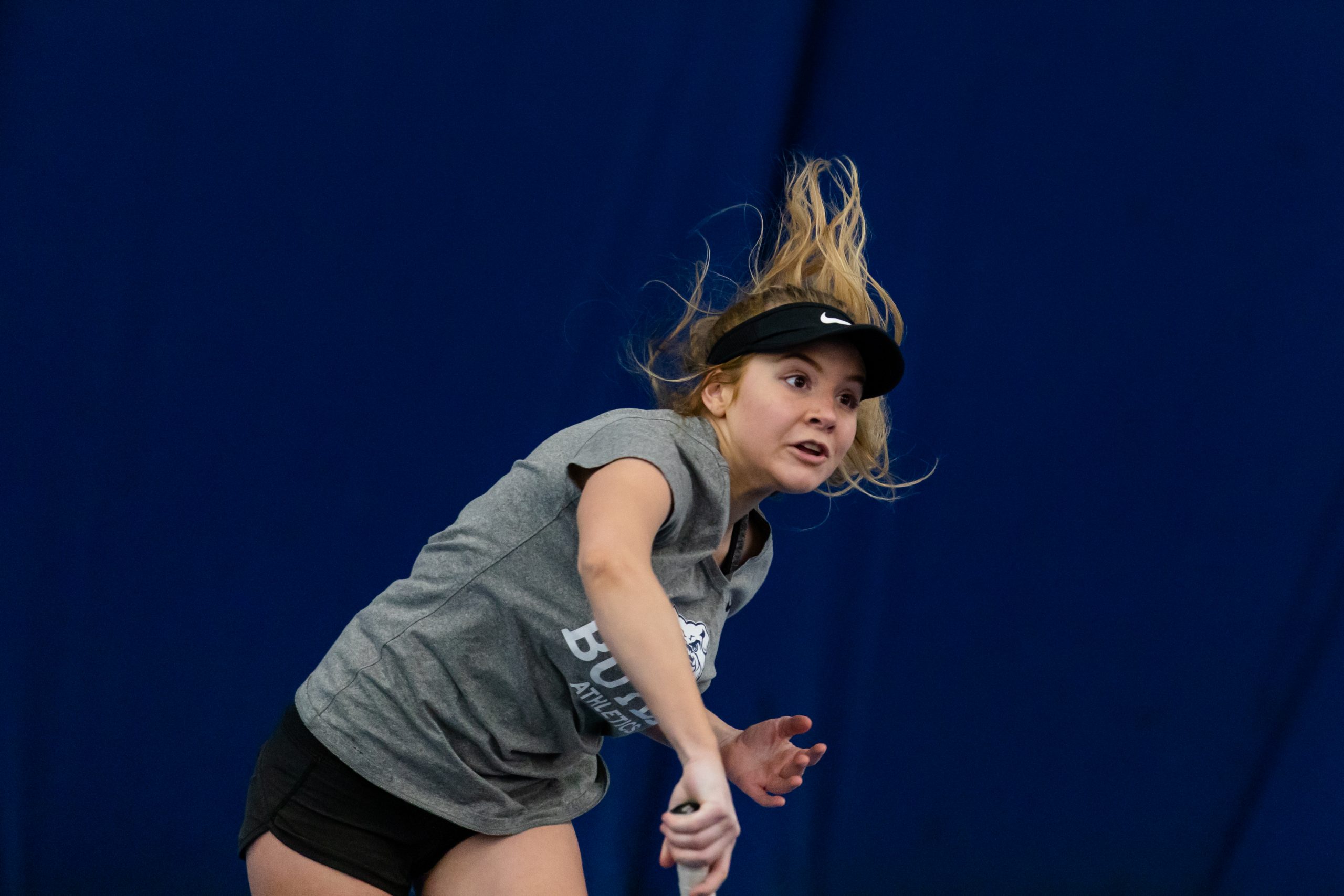 Freshman Emma Beavin serves the ball during practice. The team will play against UW-Milwaukee on Feb. 5 before traveling to Dayton on Feb. 6. Photo by Lauren Hough.

Men’s Basketball at No. 21 Xaiver

The men’s basketball team will travel to Cincinnati for their second matchup of the season against longtime rival Xavier. The Musketeers got the upperhand in their prior matchup on Jan. 7, defeating the Bulldogs 87-72. The Bulldogs are currently riding a two-game winning streak and are determined to make it three in a row against a ranked Musketeers team who’s also struggled in Big East play — slightly out performing the Dawgs with one more win. Tipoff is at 7 p.m. and the game will be available to watch on CBSSN and listened to on WXNT 1430AM.

The men’s and women’s track team will travel to South Bend, Indiana to compete in a two day meet at the Meyo Invitational on Feb. 4-5. Both teams come off of record breaking performances at the IU relays.

The men’s tennis team will gear up for their second home match of the season against the prestigious Yale at the Butler Tennis Bubble. The team comes off of a victory against Cleveland State, 5-2, where senior Thomas Brennan, junior Michael Karr and freshman Patrick Joss all won their singles matches in straight sets. Yale is currently 2-0, winning both prior matches with sweeping 7-0 victories.

Women’s Basketball at No. 10 UConn

The women’s basketball team will travel to Connecticut to face the Huskies for their second matchup of the season. UConn dominated the Dawgs at Hinkle on Jan. 12, 92-47, where five Huskies scored in the double digits and forced 27 turnovers on the Dawgs. The Huskies currently sit in first place in the Big East at 13-4, while the Dawgs remain winless in Big East play. Tipoff is at noon and the game will be available to watch on SNY.

The women’s tennis team will play the UW-Milwaukee Panthers for their first of two home matchups this week. The team is coming off three consecutive losses to start the season, but there have been a few bright spots in their matches. Sophomore Natalie Boesing is 2-1 at No.1 singles and has won her last two matches in straight sets. First serve for the matchup begins at 11 a.m.

The men’s basketball team will return home for a matchup against the St. John’s Red Storm for their first matchup of the season. St. John’s currently averages  79.3 points per game and is led by the guard duo of junior Julian Champagnie and sophomore Posh Alexander who average 18.9 and 14.6 points per game, respectively. Tipoff is at noon and the game will be available to watch on FS1 and listened to on WXNT 1430AM.

Men’s golf will head down to West Palm Beach, Florida for a three day long event from Feb. 6 to Feb. 8 to play against multiple Big East opponents.

Following their match against UW-Milwaukee, the team will hit the road to play their second matchup of the weekend against the Dayton Flyers. The Flyers currently stand at 4-3 on the season. First serve is scheduled for 11 a.m.

For the second home match of the weekend, the men’s tennis team will take on the Illinois State Redbirds at the Butler Tennis Bubble. The Redbirds are currently winless on the season at 0-6. First serve is scheduled for 10:30 a.m.

Women’s Lacrosse vs UIndy
The women’s lacrosse team opens up their season in an intercity exhibition matchup against the University of Indianapolis. The Dawgs are coming off of a 1-11 season in 2021. The face-off begins at noon on Varsity Field.

The women’s basketball team will return to Hinkle for their second game of the weekend against the Seton Hall Pirates. The Pirates’ currently average 65.4 points per game and are led by guards Lauren Park-Lane, Andra Espinoza-Hunter and forward Sidney Cooks. Tipoff is at 2 p.m. and the game will be available to watch on the BEDN on FloSports.

The men’s tennis team will travel downtown for a matchup against the University of Indianapolis on Tuesday following their two game homestand. The Greyhounds will play their first match of the season on Feb. 2 against the IUPUI Jaguars. First serve is scheduled for 5 p.m.

The men’s basketball team will head to Omaha, Nebraska on Tuesday to face the Bluejays in their second matchup of the season. The Dawgs took care of business against the Bluejays in Hinkle on Jan. 26, winning 72-55 by way of Bo Hodges, who boasted a career-high 18 points, seven rebounds and two steals. Tipoff is at 9 p.m. and the game will be available to watch on CBSSN and listened to on WXNT 1430AM.