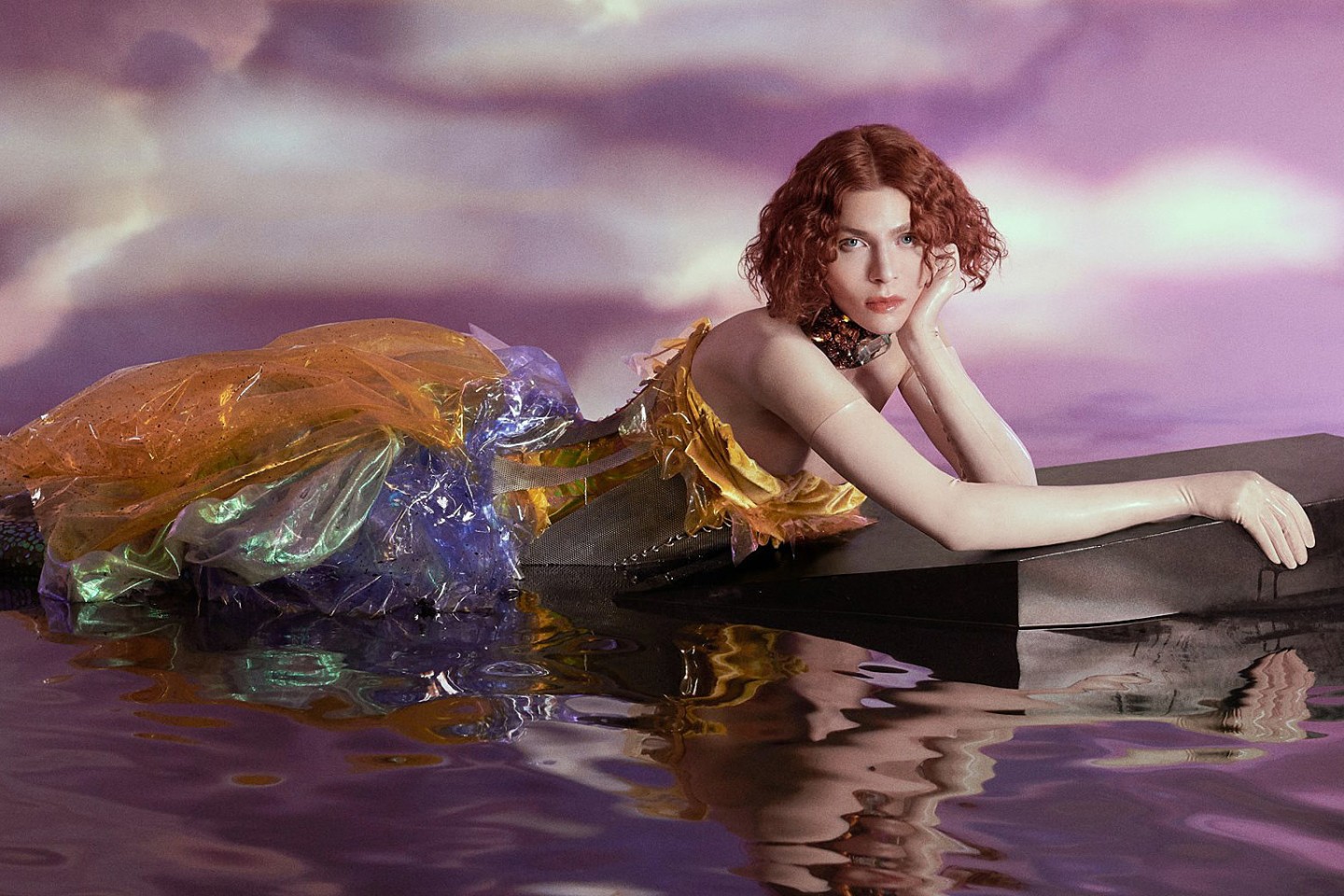 The late revolutionary herself, SOPHIE for OIL OF EVERY PEARL’S UN-INSIDES. Photo courtesy of Transgressive Records.

A car engine igniting. Plastic hitting plastic. Drops of water hitting a sink. Stretching and snapping elastic bands. These sounds, novel or not, could be the sounds of a normal day in the world of an average person. However, Scottish DJ, producer and singer SOPHIE did not see these sounds in the same way. For her, these sounds were never mundane — they became a symphony of expression, self-love and exploration of one’s own person.

However, she passed away last year at the age of 34. On Jan. 30, 2021, in Athens, Greece, she slipped and fell when trying to watch the full moon. Transgressive, her label, said in a post mourning her death that she passed “true to her spirituality.”

It is unfortunate that so many people are still unaware of the monumental and forward-thinking pop music she made. Her music still means so much to so many people, especially those in queer community. SOPHIE, a trans woman, was unabashedly herself in every song and was open about her identity. To see such a promising young trans artist push genres and tell her story was so inspiring for many queer people around the world. Her legacy and love continue to live on through her music and through the lives she touched.

SOPHIE’s music, both as a producer and lead artist, was unlike anything the music world had seen. Her collaborators include indie groups, like Kero Kero Bonito and Let’s Eat Grandma, to rap artists, like Vince Staples, Kendrick Lamar and Quay Dash, and pop powerhouses, like Rihanna and Madonna.

“[SOPHIE’s music] wasn’t really something that I thought that I would like,” Petroff said. “I’d seen her collaborate with Charli XCX before. That’s kind of what got me to be like, ‘let’s see what else she has.’”

SOPHIE has production credits in some of Charli’s most acclaimed work. From the braggadocious “Vroom Vroom” to the bubbly “Roll With Me” and the unforgotten-by-fans unreleased track “Taxi,” SOPHIE’s fingerprints are everywhere in Charli’s recent works.

“[SOPHIE] taught me so much about myself without ever realizing,” Charli said in a statement following SOPHIE’s death last year. “I wish I had told her more how special she was, not just her music, but her as a person. I love you and I will never forget you SOPHIE.”

SOPHIE’s personal discography was also monumental. Her first release was a series of singles from 2013 to 2015, later compiled as a compilation known as PRODUCT. Included are songs like the bass-boosted, car-speaker-rattling “HARD” and the pop confection “VYZEE” that can only be likened to an exploding soda can. It also includes softer moments, like the EDM-tinged ballad “JUST LIKE WE NEVER SAID GOODBYE.”

Her first and only studio album was released in 2018. The album was named “OIL OF EVERY PEARL’S UN-INSIDES” which when said quickly, sounds like “I love every person’s insides.”

The album has SOPHIE’s signature sound maxed out, with thick heavy bass on “Faceshopping” and “Ponyboy,” which both explore gender performances, gender dynamics and sexuality. Her softer side still pokes through on “Infatuation,” which is the clearest love song in SOPHIE’s discography.

However, all of SOPHIE’s stylings accumulate on the penultimate track, “Immaterial.” The instrumental is so finely produced, with sparkling synths, a bouncy bass drop and a choir of voices shouting gleefully. The song has that undefinable twinkle of inexpressible joy put into it.

Lyrically, the song speaks to the joy of being without physical or mental restraints. Explicitly queer, it speaks to the “immaterial girls, immaterial boys” living “day by day, life after life/Without my legs or my hair/Without my genes or my blood/With no name and with no type of story.” In a love letter directly to her community, the bridge of the song takes a bittersweet tone following her departure from the physical world. She says, “I could be anything I want and no matter where I go, you’ll always be here in my heart.”

No words could directly express how much SOPHIE meant to queer people around the world, especially to the trans community. With not enough representation in mainstream culture, seeing SOPHIE be so open about herself and still give the world unspeakably beautiful art is inspiring to say the least. Petroff spoke openly about how SOPHIE’s presence was important to the community.

“She’s a trans icon and very influential for a lot of other trans people, like myself,” Petroff said. “It’s just great to see her out there representing herself in her community.”

In addition to being a trans woman herself, she often collaborated with other trans artists. The aforementioned Quay Dash, Arca and Kim Petras are all fellow trans women that SOPHIE has production credits with.

SOPHIE’s artistic vision was something so unique and special to her. Across all her credits, everything screams SOPHIE in such a united vision. She was even known to create all her own production stems from the ground up, fine-tuning every single snap to be what she wanted. Petroff said this touch was something that was lost too soon.

“A lot of people have heard her before but don’t know that she produced it,” Petroff said. “It’s really sad that we’re not going to be able to hear her specific touch in music anymore, but it’s really touching for me to see other artists inspired by her and continuing to talk about her influence.”

Her prominence in the music industry is monumental for queer visibility. From her Grammy nomination to spearheading the surge of glittery hyperpop music in the mainstream, her legacy is cemented as one of the most important experimental artists of our generation.

So many people are unaware of what SOPHIE has done to push the boundaries of not solely pop music, but music as a whole. Her entire discography was about changing perceptions about what music can be and where in the world beauty is found. In an interview with Rolling Stones in 2015, she said “I think all pop music should be about who can make the loudest, brightest thing. That, to me, is an interesting challenge, musically and artistically. And I think it’s a very valid challenge — just as valid as who can be the most raw emotionally.”

It is so important that people like SOPHIE are talked about in this world. Currently, trans women are facing discrimination everywhere they turn, from schools to sports. It is even worse for trans women of color, whose average age in the United States is only 35. In a world that seemingly turns its back on women like SOPHIE, she turned her pain and inner emotions into dance music that celebrates trans and queer people everywhere. By giving herself to the world, she made it better and more inclusive for everyone.

Painted by Scott Marsh in Sydney, Australia. Photo Courtesy of @Stereogamous on Twitter.

A very important song in SOPHIE’s catalog has been unmentioned thus far: the first track of “OIL OF EVERY PEARL’S UN-INSIDES” and its lead single, “It’s Okay to Cry.”

Prior to the single’s release, SOPHIE was extremely secretive, rarely appearing in person or on camera. The video features her staring directly at the camera unclothed. This is how she showed the world herself and her transness.

The song features almost all standard SOPHIE elements, but something is different. Everything is pulled back — there is little bass, little distortion, no vocals from the aforementioned muse Believe. Heavenly pianos back most of the song, until the unburdening drop in the last fifteen seconds.

SOPHIE chose to sing directly to her audience. With open arms, she invites the audience into a hug via an audio waveform, letting them know it’s okay to cry and that their inside is their best side. These lyrics might seem superficial and simple from anyone else, but SOPHIE delivers the lines with such delicateness, rawness and openness. By singing directly to her queer and trans fans, as a queer trans woman herself, she is telling them that they are loved and accepted by her.

It is a deeply emotional song, especially following her passing, and it remains as her magnum opus. A song letting a whole community know they are loved, accepted, that there is power in who they are and that it always is okay to cry.

And for SOPHIE, cry we must. However, we also need to celebrate. Celebrate her life and her impact. Celebrate the changes she made for all queer and trans artists. Dance to the songs that are auditory expressions of complete euphoria and joy. Most important, remember the woman who gave all of her authentic self to the world.

SOPHIE, we miss you, but you will never be forgotten. No matter where you go, you’ll always be here in our hearts.