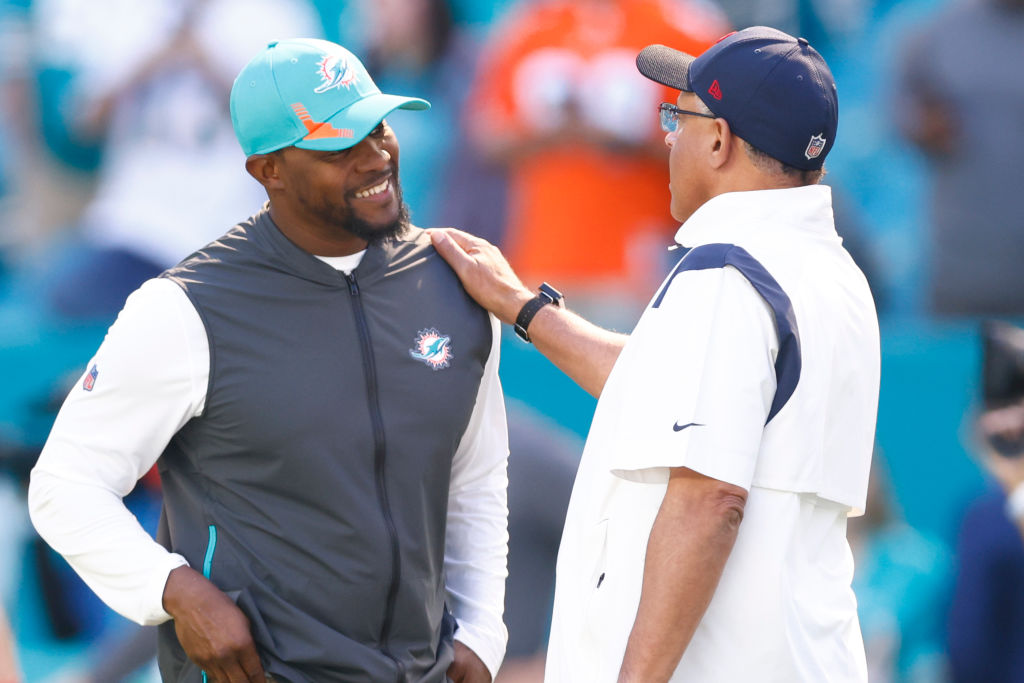 Brian Flores and David Culley chatting ahead of a matchup between the Texans and Dolphins on Nov. 7, 2021. Photo courtesy of Getty Images.

On Jan. 17 — Martin Luther King Jr. Day — you probably couldn’t watch a sporting event without someone mentioning MLK and how that sports league wants to carry on his legacy and the ideals he fought for. The NFL had their first game on MLK Day ever — a wild card playoff game featuring the Arizona Cardinals and the Los Angeles Rams.

The league and its players commemorated the late Dr. King with helmet stickers of his initials as well as ones that said “BE LOVE” and “STOP HATE.” Breaks during the game were used to show videos of players and coaches describing what MLK meant to them and how the NFL is aiding the battles versus racial and civil justice.

While it is great that the league is remembering MLK, decisions made by those in the NFL — specifically regarding positions of power — have done nothing but impede the progress of black and brown people around the sport.

More specifically, I’m referring to the lack of hiring and quick-trigger firing of black head coaches and the unfair standards that they are held to. In a league whose players are predominately black, executive positions aren’t nearly as available for people of color.

As of right now, there are five black general managers, one black team president and one black head coach. The 2021-22 regular season began with three black head coaches — Houston’s David Culley, Miami’s Brian Flores and Pittsburgh’s Mike Tomlin. Tomlin was the only one to retain his job after the last week of the season, as both Culley and Flores were questionably relieved of their duties.

Tomlin is one of the most accomplished and respected coaches in the league now and a surefire hall-of-famer. He has an overall record of 162-94-2 over 15 seasons with the Steelers and led them to a Super Bowl win in 2008. He is the first coach in history to start the first 15 seasons of his career without a losing season. It might be worth mentioning too that he is coaching for a historic franchise like the Steelers, who are tied with the New England Patriots for the most Super Bowl wins and have only had three head coaches since 1969.

With only one black head coach left in the NFL, it sends a message to other black candidates that in order to keep your job, you need to accomplish what Tomlin did — a message that of course isn’t fair when compared to the standards of white candidates.

Make no mistake, Tomlin deserves his flowers. But something should be said about the disregard that just about every other black head coach gets treated with in the league. Going back to the most recent firings of black head coaches, many people were scratching their heads as to why Miami and Houston decided to part ways with their leaders.

Starting with Flores, it was reported that he was difficult to work with and didn’t have the greatest relationship with Dolphins quarterback Tua Tagovailoa, whom team owner Stephen Ross loves. Even if you were to put that to the side, Flores compiled a 24-25 record — 9-8 this season — in his three seasons with Miami. Just to remind you, the Dolphins are in an AFC East division that has been run by the Bills and the Patriots for years. Flores also had a 4-2 record against Bill Belichick, the best winning percentage of any coach since 2000. Not sure if Ross was expecting a deep playoff run with a young and oft-injured quarterback in an always competitive division and conference, but by any sensible standards, Flores did a reasonably good job with what he had to work with.

For David Culley in Houston, it was a setup from the start. First off, Culley entered the season without the most important thing for a coach: a quarterback. Deshaun Watson — who already was not playing because of off-the-field incidents — was requesting a trade and therefore never took the field for the entire season. Several other players, including veteran defensive end J.J. Watt, either requested to be traded or to be released prior to this season. So when the regular season came around, Culley had gone from an average roster to easily one of the worst in the league. He could thank his predecessor Bill O’Brien for that.

And as if things couldn’t get worse for Culley, his quarterback, veteran journeyman Tyrod Taylor, got injured in week two. Taylor would miss six games before returning and eventually would be benched in week 13 for the rookie, Davis Mills. With all the uncertainty at the quarterback position and one of the worst defenses in the league, Culley was still able to win four games. Two of those wins were against teams that ended the season with a winning record. And in the 13 losses they had, five of them were by one possession — eight points or fewer.

That may not seem like a big feat, but the Texans couldn’t have been in their right mind to expect a result much better than 4-13. And yet, they fired Culley and have been interviewing candidates — who in my opinion are nowhere near as qualified — like Josh McCown. The move begs the question, was Culley just hired to take the fall for poor management and ownership?

One may ask, why hasn’t the NFL done anything about the lack of diversity? A PR official from the league would answer, “Of course we have! Just look at how the Rooney rule has changed the hiring process and presented more opportunities for diverse coaching candidates.” They would be lying through their teeth.

Let’s get this straight. The Rooney rule has changed the interviewing process for diverse coaching candidates, not the hiring process. Even then, most teams just fulfill their quota of interviews with people of color so they won’t lose a draft pick and end up hiring a coach that either no one has ever heard of or a recycled coach that has had losing records with two other teams. It’s a cycle that has been going on for decades, and it’s becoming ridiculous.

Too many times have we looked at the head coaching vacancies and thought to ourselves, “Wow, Eric Bienemey or Byron Leftwich would be great for this team,” only for them to be passed on yet again.

Too many times we have said, “I think Todd Bowles or Jim Caldwell is just one year away from making it to the playoffs,” only to see on ESPN the next day that they’ve been fired.

Change needs to happen, but quite frankly, it won’t.

It won’t happen because the same type of people have been making these decisions on who to hire for far too long. Until the team owners and front offices of the NFL become more diverse, the head coaches in the NFL will continue to overwhelmingly appear how they have been for the last 101 years.

I’ll end with this. For the longest time, the prototypical NFL quarterback was a tall, white guy. And for a while, that was fine because it worked. However, once black quarterbacks were given a chance, teams began to see that they could play the quarterback position too. They finally recognized that not only did black athletes have the talent, but also the intelligence to play the position. Now, look at the league. Arguably some of the best quarterbacks in the league are black.

Why can’t we do this for head coaches and see what happens? I think we’d end up with a similar result.