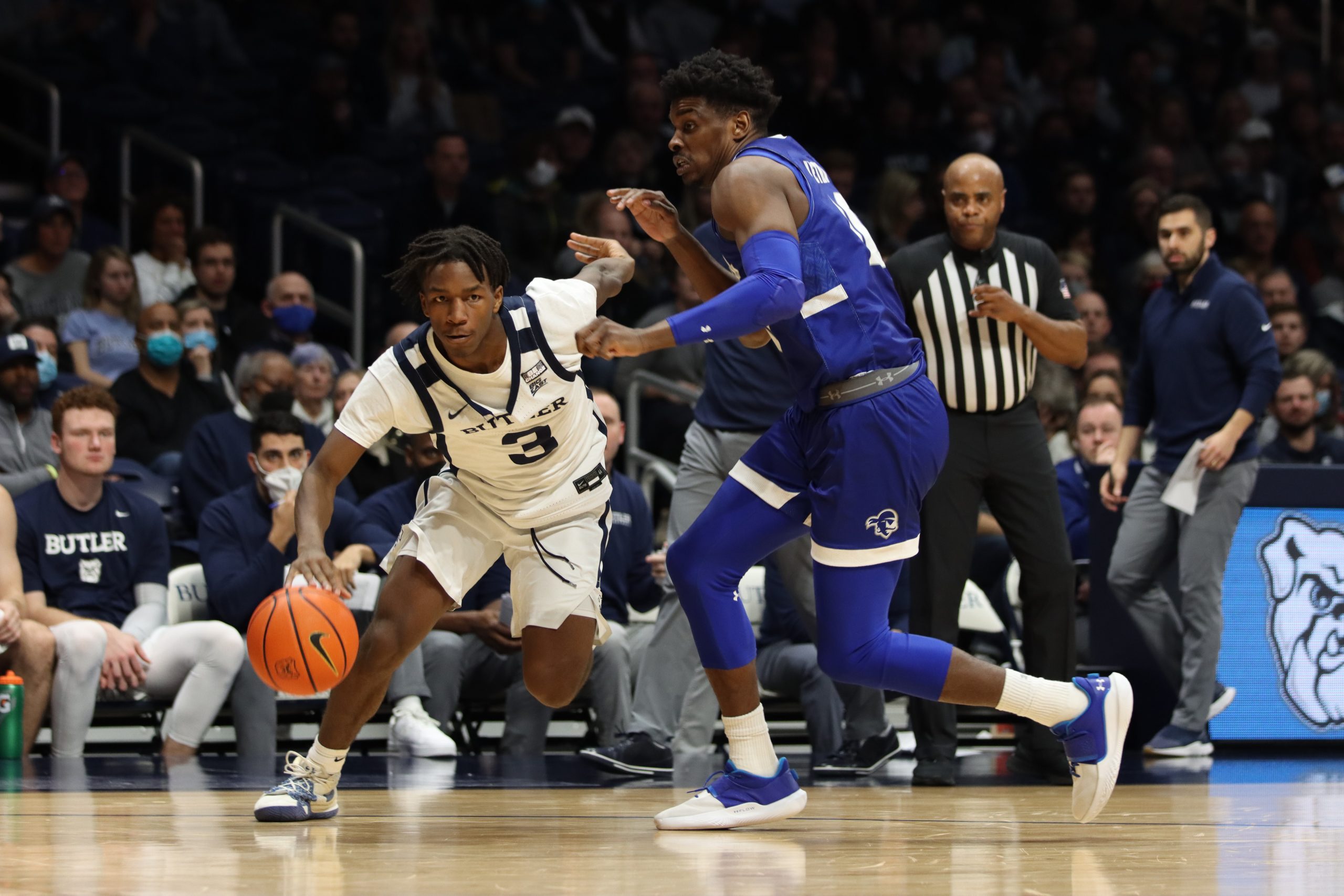 Butler sophomore guard Chuck Harris drives to the basket through contact in a loss versus Seton Hall on Jan. 4. Harris has struggled scoring this season and had just one point in Butler’s most recent game, a loss to UConn on Jan. 18. Photo by Francie Wilson.

Just 48 hours after Connecticut wrapped up a 16-point win over the Butler men’s basketball team in Hartford, the two teams are set for a rematch in Hinkle Fieldhouse tonight. Back-to-back games versus the same opponent are a rare occurrence — Butler has only done it four times in the Big East and just once in the regular season. The Bulldogs have lost the second matchup three out of the four occasions.

Butler has struggled since the beginning of 2022, losing four of its last five games. To be fair, all four losses have come against teams ranked in the AP Top 25. Regardless, the Bulldogs’ performances haven’t exactly been promising in those games, losing by an average of 22 points.

The Bulldogs are running out of time to get this season back on track and are a loss tonight away from falling to .500 overall. The NCAA Tournament seems like a long shot unless Butler goes on a massive winning streak, a streak that would likely need to start tonight.

Here’s what you need to know as Butler looks for its first ever win over UConn.

Who: Butler at No. 25 Connecticut

Rebounding is a problem… a massive one

Rebounding the basketball was never going to be a strength of this team that lacks a true center, but it has become a significant weakness. Butler has only outrebounded its opponent on six occasions this season — and have won all six games. That is slightly more times than the five times Butler has been outrebounded by 10 or more. The Bulldogs lost each of those five games.

To make matters worse, the team has lost the rebounding battle in each of the last seven games, the last six coming in Big East play. The Bulldogs are far and away the worst rebounding team in the conference, as they sit dead last in rebounds per game by four whole boards. The team in first? The UConn Huskies.

There are a couple reasons for this unfortunate phenomenon. The first, most obvious one, is Butler lacks a player that is a great rebounder. Bryce Nze and Bryce Golden are good players, but neither is a particularly good rebounder, especially when they are matched up with a 7-footer or a freak athlete.

The second reason is Butler’s defense has plummeted, and more of the opposing teams are going in, which means there isn’t even a chance to grab a rebound. The lack of good defensive and rebounding compounds on one another, because even if the Bulldogs force a missed shot, the other team will often grab the offensive board and get a second chance to score.

The last, most concerning reason for poor rebounding numbers, is effort. Rebounding the basketball is not a single player’s job — it is on the entire team, especially when said team lacks a true big to clean the glass. This effort has been absent, and unless rebounding becomes something the entire team is committed to, the Bulldogs will continue to get dominated in that department.

UConn is the real deal

While Butler’s record is not where fans want it to be, it is crucial to note that the team’s schedule has been very difficult. The Bulldogs have played and lost to seven teams in the Kenpom top 30 and three in the top six. Butler’s only loss outside that tier is to Texas A&M, a team that is 15-3. While past Butler teams may have taken more advantage of these premier opponents, it’s hard to blame the Bulldogs for losing to teams better than they are.

Of these tough opponents, UConn is one of the best, and presents a matchup nightmare for Butler. Kenpom has the Huskies ranked 19th, and UConn may have the most impressive win of any team in the country this season when they handed current AP No. 2 Auburn its only loss this season on Nov. 24.

UConn plays excellent on both sides of the ball, but specifically dominates on the interior. The Huskies rank second in the nation in blocked shots per game and sixth in offensive rebounds per game. Both of these strengths were on full display two days ago, as the team racked up 16 offensive boards and 10 blocks — Adama Sanogo had six and four, respectively. Similar to Butler, the Huskies do not shoot the ball particularly well, but forcing extra possessions and blocking shots are huge momentum builders and demoralize opponents, and that is exactly what happened in Hartford.

UConn is a terrible matchup for Butler, but that doesn’t mean the game is over before it starts. The Huskies are much more vulnerable on the road than at home, so if Butler was going to win one of these back-to-back games, it would be this one.

For Butler to win, they need to shoot the ball well. As was seen in Hartford, the Bulldogs struggled in the paint because of Sanogo’s presence, so attacking from the outside will be necessary. If Butler struggles again shooting, this will be a long night.

Despite the massive disparity in season-long rebounding numbers, Butler held their own in the first matchup, specifically on the offensive glass. They will need to repeat that performance and even improve on it. Minimizing Sanogo’s impact on the interior will take every Bulldog’s maximum effort, but it is essential to coming away with the upset.

The final key is the sixth man, Hinkle Fieldhouse. Bulldog fans need to create a hostile environment for the road team and build momentum for the home side. Butler will need almost everything to go right to win, but sprinkle in some Hinkle magic and the task becomes a whole lot easier.