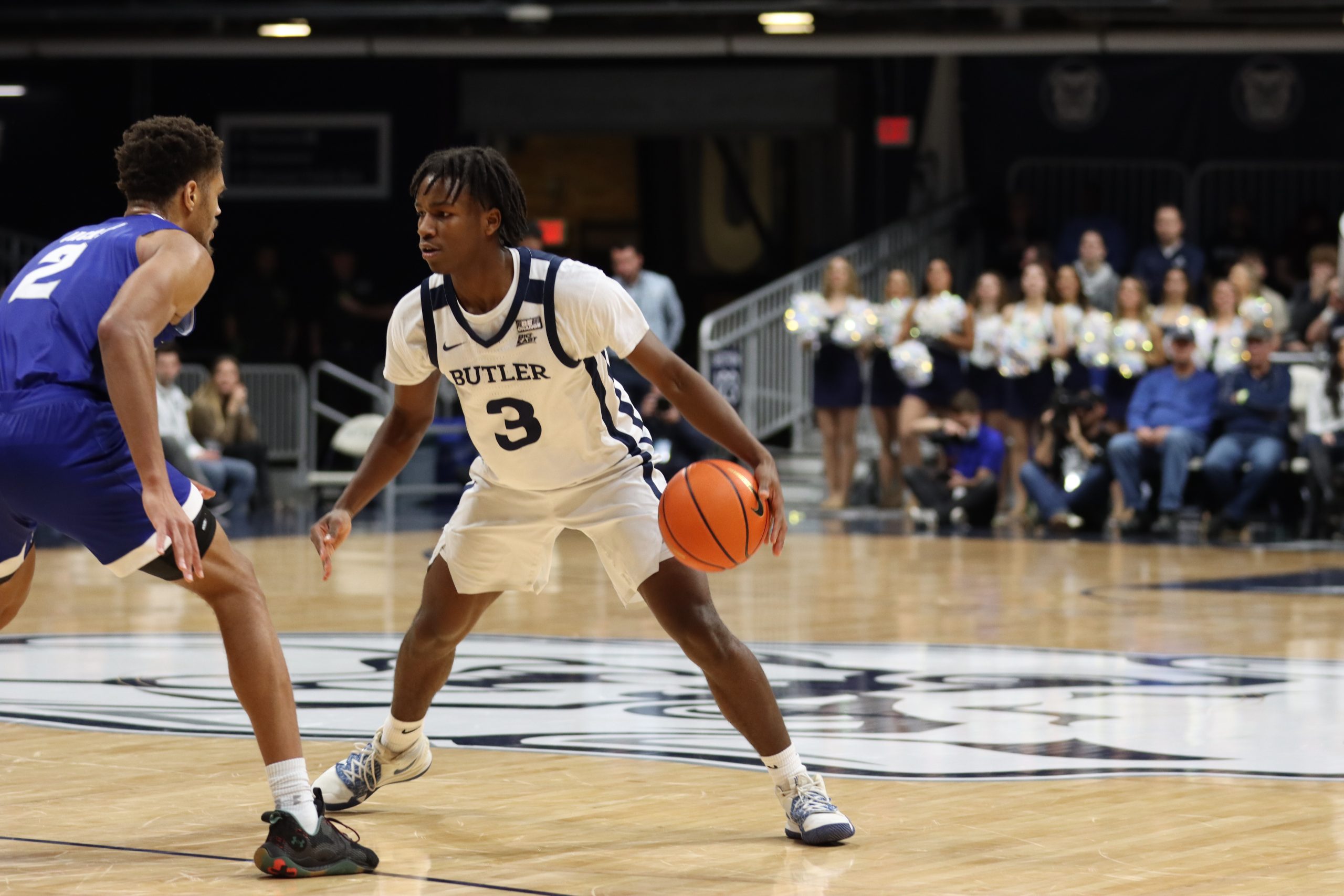 Sophomore guard Chuck Harris, who leads the team in scoring, was held scoreless against Seton Hall on Jan. 4. Photo taken by Francie Wilson.

The Butler men’s basketball team failed to protect their homecourt on Tuesday night against the No. 24 Seton Hall Pirates in a 71-56 loss. Bryce Golden was a lone bright spot on offense for the Dawgs, pouring in a team-high 19 points on 7-for-9 shooting. Bryce Nze had 12 points and 5 rebounds. Both Jayden Taylor and Aaron Thompson provided 10 points, but Thompson struggled to find his teammates as he ended with a 1-4 assist-to-turnover ratio.

After the Bulldogs started the game with a 16-9 lead, the Pirates would respond after a timeout with a 15-2 run of their own. Seton Hall wouldn’t relinquish the lead after that, as six points would be the closest that Butler would come the rest of the game. After the game, head coach LaVall Jordan would look back at that lead as a missed opportunity for his team.

“That’s a disappointing result,” said Butler coach LaVall Jordan. “Seton Hall picked up their energy midway through the first half and we didn’t match it. We had good starts in each half but we didn’t sustain that level of play. We have better basketball in us than what we showed tonight.”

Let’s go beyond the box score to examine some key missteps by the Dawgs in their first conference loss of the season.

No help from the bench

Something that glared right away from the stat sheet was the points off the bench. Seton Hall could have scored one point — they actually ended with 16 — and they would have had more than Butler.

Three players, including the team’s leading scorer Chuck Harris, were held scoreless from the bench. Since his best performance of the season against Oklahoma on Dec. 7, Harris has shot 6-for-28 from the field and 3-for-17 from beyond the arc.

The poor shooting streak may not have always ended with a loss, but it doesn’t help the team right now — especially when it looks like Jordan just wants Harris to come off the bench and score. Harris still has time to shake off his scoring funk, but hopefully it comes quickly.

Alexis Yetna was a big part of that, grabbing 10 rebounds for the Pirates. And though 7-foot-2-inch Ike Obiagu only had three boards, his presence in the paint made it hard for the Dawgs to clean up the glass.

For the season, Butler is averaging 32 rebounds per game and allowing their opponents to average 31.5 rebounds per game. This is a margin they will want to widen as the season continues. Otherwise, games like this will continue to happen.

Lack of production from Bolden, Harris is hurting the Dawgs

As mentioned previously, the lack of scoring from Harris has been a blow to Butler’s offense. What may be an even bigger blow to their offense has been the recent downtrend in shooting from Jair Bolden.

Bolden’s ability to get hot from deep had become a real catalyst for the Bulldogs’ offense. Without it, it makes it hard for Butler to dig into a deficit. It showed against Seton Hall, as Obiagu’s presence in the paint made it easier for Seton Hall to be more aggressive with their perimeter defense. Every team that Butler faces won’t have a seven-footer, but teams will still try and make it difficult for Bolden to get up his shots.

Moving forward, the Dawgs need to find their footing on offense. This season, Butler is just 1-5 when they fail to score at least 60 points. They will try again to reach that mark on Jan. 7 against No. 22 Xavier in Hinkle.