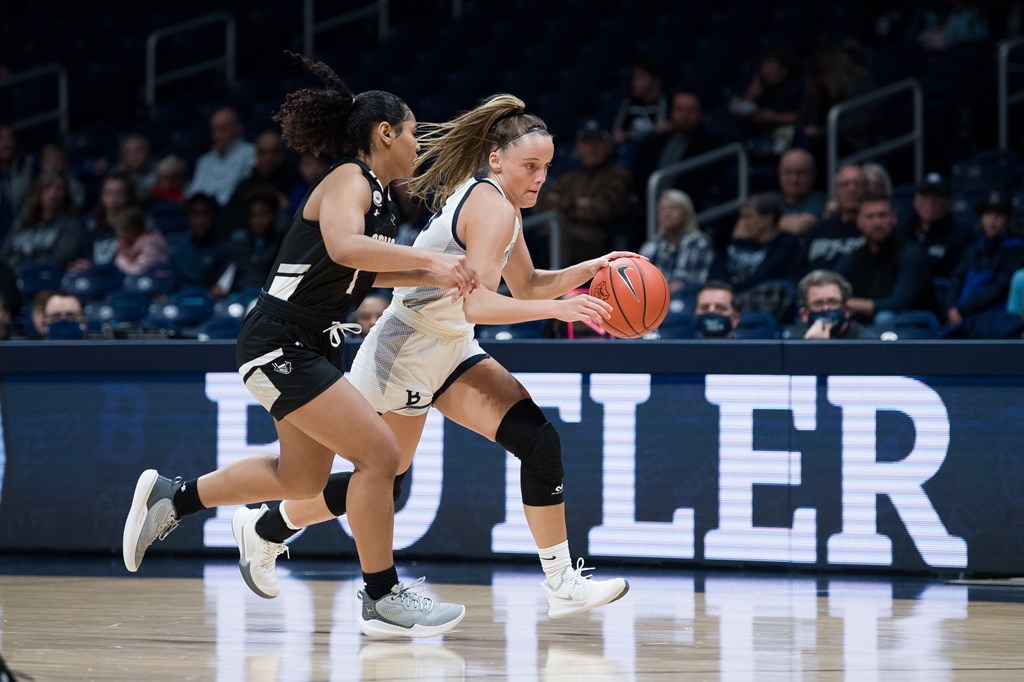 Redshirt freshman guard Kendall Wingler dribbles past an Austin Peay defender in matchup on Nov. 20. The Bulldogs went on to lose 65-68. Photo courtesy of Zach Bolinger.

For the second time since rejoining the Big East, the UConn Huskies will be visiting Hinkle Fieldhouse to face off against the Butler Women’s basketball team.

UConn comes into the game ranked No.10 in the country and have been without their star player, Paige Bueckers, for much of the season due to a knee fracture. With this in mind, the Huskies are slightly more vulnerable this go around compared to their usual display of dominance on the court.

On the flip side, Butler sits at 1-11 overall, but has not played a game in two weeks due to COVID-19 safety concerns. Butler’s last game was a 77-55 loss against Xavier on Dec. 29 in Cincinnati. The Dawgs are 0-3 in Big East play and are searching for their first conference win of the season.

Following the loss, Butler faced COVID-19 issues within the program, causing their next four games to be postponed. The Big East is eyeing to reschedule these games at a later date, potentially giving the Dawgs more chances at some quality conference wins.

Without their top player in Bueckers, senior Christyn Williams has led the Huskies in scoring with 13.7 points per game. Outside of Williams and Bueckers, no other players are averaging double figures for the Huskies.

UConn is coming off a 63-55 win at home versus Creighton — a game that highlighted some of UConn’s flaws. While the Huskies did get the win, the team shot poorly from the field, shooting only 25% from the 3-point line and 66% from the free throw line.

With this in mind, there is certainly potential for this game to be closer than most are expecting, but the Dawgs will need to do multiple things in order for this to be possible.

First off, Butler will need to have a consistent offense through all four quarters. This has been a bit of an issue for Butler in conference play, and was highlighted in their losses to Marquette and Xavier. Avoiding scoring droughts and having consistent 3-point shooting are musts for the Dawgs in this matchup.

Going up against a team like UConn is always a daunting task for any team in the NCAA. However with UConn’s flaws this season, the door could potentially be open for a team to upset the Huskies, and with some Hinkle Magic — anything is possible.