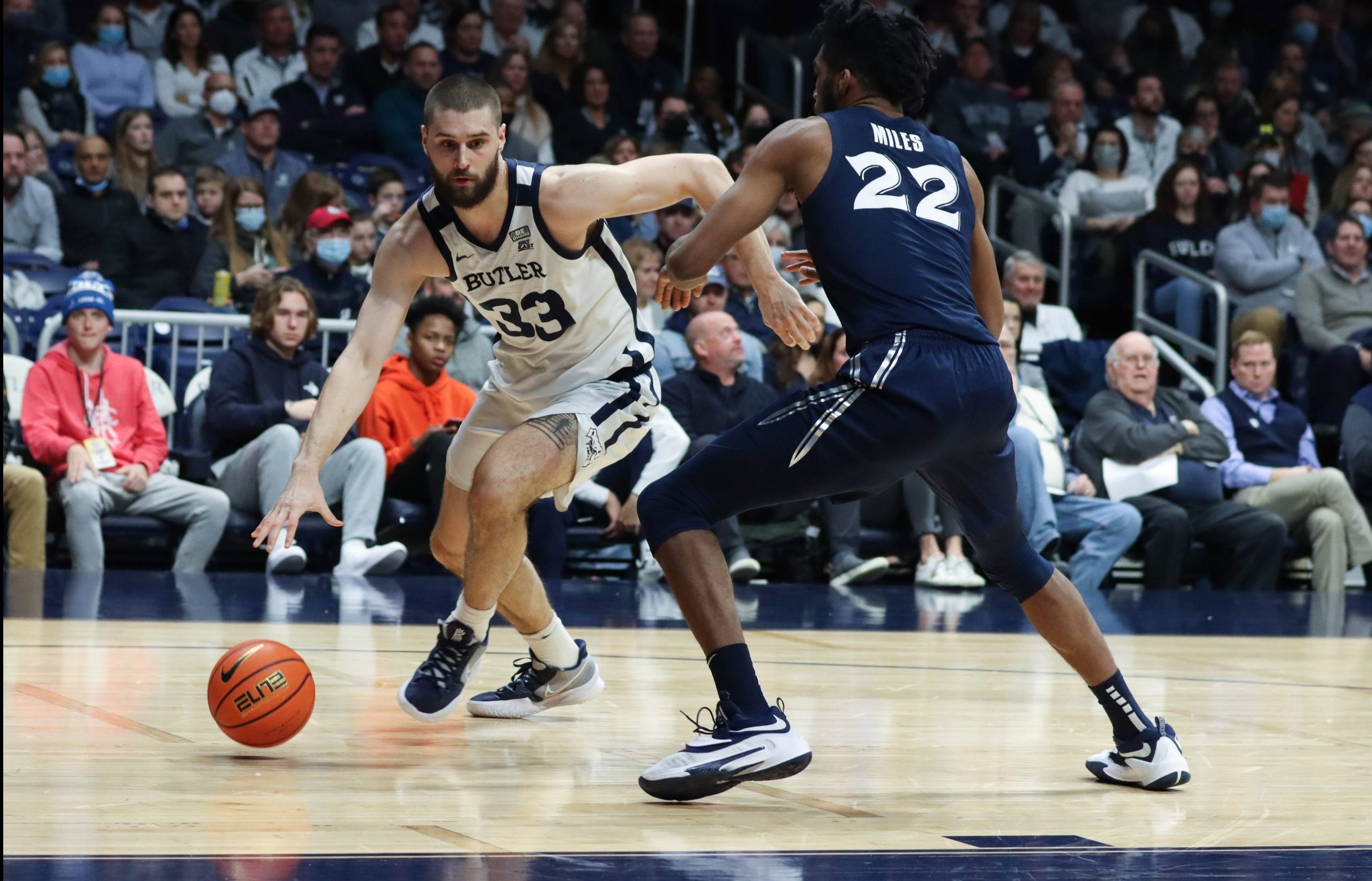 Bryce Golden drives to the rim in Butler’s loss to Xavier on Jan. 7. Golden finished the game with 19 points and leads the Bulldogs in points and rebounds this season. Photo by Francie Wilson.

The 8-6 Butler men’s basketball team, coming off two straight losses to ranked conference foes, are back in action tonight on the road at Georgetown. This marks the first conference road game of the season and is just the second true road contest for the Bulldogs.

However, this will not be the truest of road tests, as Georgetown has limited capacity at Capital One Arena to 25% due to the COVID-19 pandemic. On top of that, Hoya head coach Patrick Ewing will also miss the game due to “D.C. Department of Health guidelines.” Georgetown announced that assistant coach Louis Orr would serve as the team’s acting head coach until Ewing returns.

The Hoyas went on an unfathomable run to win the Big East tournament last season yet has not followed through on that success this year. Early season losses to Dartmouth and St. Joseph’s overshadowed the impressive win against Syracuse. The 6-6 Hoyas have had some struggles this season, but as they proved last year in the conference tournament, they can beat any team on any night.

To put it simply, this is a must-win game for the Bulldogs. Georgetown looks headed for a near-bottom finish in the Big East this season, and with the conference deep with quality teams, there will not be too many games as easy as this one the rest of the way for Butler.

Here’s what you need to know ahead of the matchup in Washington, D.C.

Who: Butler at Georgetown

Where: Capital One Arena

After two consecutive losses, the Bulldogs will gain some reinforcements in the front court. Ty Groce will return to the lineup tonight after missing the last two games in health and safety protocols. His return is good news for Bryce Golden and Bryce Nze, who played 32 and 36 minutes respectively versus Xavier on Jan. 7. This is especially important for Nze, who clearly played the entirety of the game experiencing pain in his injured shoulder. Groce is the clear option to give the pair of Bryce’s a rest and brings a little something different to the lineup than they do.

The big, anticipated return though, is Bo Hodges. Hodges transferred to Butler from East Tennessee State following the 2019-2020 season, but transfer eligibility rules and injuries limited him to just nine games last season. Hodges made an impact though, showing freak athleticism rarely seen from a Bulldog, and proved to be an excellent rebounder for a guard.

Prior to this season starting, Hodges’ injury woes continued. He suffered a tibial plateau fracture in his left knee in late August and was declared out indefinitely. Now, Hodges finally makes his return to the court.

Time will tell how much this injury affects his burst and athleticism, as well as how he fits into the lineup. But having a big, versatile wing has the potential to greatly help this struggling Butler team. It will likely take time to get him back up to game speed and fully ingrained into the lineup, but Bulldog fans will finally get to see Hodges back on the court tonight.

According to the all-powerful Kenpom rankings, Georgetown is 129th in the Adjusted Efficiency Margin, which ranks dead-last in the Big East. Do not celebrate just yet Bulldog fans, because Butler is second-to-last in the conference and comes in at 122nd. The next closest team is DePaul at 111th. Not-so prestigious programs such as Wagner, Navy and Grand Canyon sit ahead of both the Bulldogs and Hoyas.

The best of Georgetown’s offense has come from freshman Aminu Mohammed, who leads the team in scoring and rebounding. The 6-foot-5-inch guard grabbing eight rebounds per game is impressive, as is his three offensive rebounds per game. The Bulldogs will need to keep an eye on Mohammed throughout the game and avoid giving up second-chance possessions.

More importantly though, the Bulldogs will need to be diligent about protecting the perimeter, especially after getting torched from deep against Xavier. The Hoyas shoot 38% from three on the season, two percentage points better than any team in the conference. A big reason for this is the incredibly efficient Donald Carey, who shoots 47% from three and 94% from the free throw line.

The scariest proposition for the Bulldogs though is Kaiden Rice. His 34 points versus UMBC are the most any Big East player has scored this season and he did it shooting 10-12 from behind the arc. Rice has a green light to shoot the ball, averaging 10 3-point attempts per game. Rice has hit five or more threes in four games this season but has also had games where he went 0-7 and 0-8 from three. He is a streaky shooter, and Butler needs to do whatever it takes to not allow him to get hot.

After starting off the Big East schedule with three straight home games, the Bulldogs are rewarded with three games on the road in the span of six days. Georgetown is by far the easiest of the three, as Butler travels to No. 14 Villanova and Connecticut right after. If Butler loses this one, they could easily return to Hinkle Fieldhouse under .500.