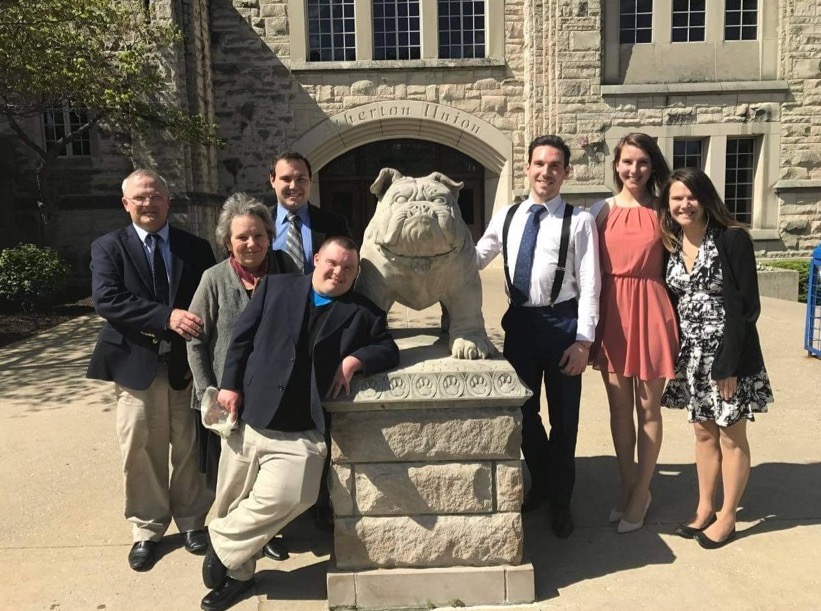 Andrew Cutter with his family on Butler’s campus. Photo courtesy of Philip Cutter.

For seven years, a normal day at Atherton consisted of the beeps of IDs scanning, the smell of daily specials and a kilowatt smile from Andrew Cutter. Sadly, Andrew will no longer be a smiling face welcoming people to Atherton. Due to complications from COVID-19, Andrew passed away at the age of 30 on Jan. 15, 2022. A friend to all, and a beloved part of the Butler community, Andrew exuded a zest for life few could match. Whether at Butler, his church or with his family, Andrew never failed to make everyone around him feel cared for and adored.

Andrew’s time at Butler started when he was around seven years old and never truly ended.  Watching Andrew work for years with Butler students for speech therapy, Andrew’s older sister Ellie credits a lot of Andrew’s ability to communicate to his time spent working with Butler students. Seeing the impact speech therapy had on Andrew’s life was what initially inspired Ellie to work with children with special needs.

Now teaching students with Down syndrome, Ellie said she and her students will miss the days Andrew used to visit her classroom.

After graduating from North Central High School, and completing the Project SEARCH Internship Program, an employment preparation program for people with disabilities, Andrew began his professional career at Butler. Starting in the interdepartmental mail room, Andrew’s younger brother Philip recalled hearing of how in addition to other faculty, Andrew would make then-president Bobby Fong’s day with his cheery deliveries.

After his time in the mail room, Andrew worked in maintenance for a short while and then made his way to Atherton where his siblings agreed that he thrived constantly being around students and staff. One of Andrew’s coworkers, Robert Stills, who has worked at Butler for the last 26 years, said that Andrew was deeply loved by all the staff.

Andrew’s younger sister Jessica and another one of Andrew’s coworkers, Maretha Millbrooks, said that while Andrew loved all the students, he especially loved the football and baseball players. Between wiping tables, Andrew would excitedly strike up conversations with the players as they ate.

Connor Benson, a former Butler football player and junior risk management and finance double major, said in an email to The Butler Collegian that Andrew never failed to make his day a little better.

“Andrew was a bright spot on campus,” Benson said. “He always had a big smile on his face and loved talking to students at Atherton. Andrew would always check in and ask how students were doing, and when we asked him how he was, he would always respond with positive things to say. If we can take anything from Andrew, it’s that constant positivity and kindness can go a long way and be contagious to the people around you.”

People played a huge role in Andrew’s life. More than just wanting to meet people, Andrew cared about forming authentic, genuine friendships with everyone he crossed paths with. Andrew’s brothers Philip and Daniel agreed that Andrew led by example, teaching them how to care for those you love.

Being part of the Butler community since childhood, Andrew got to know a lot of people on campus. Whether in Atherton or walking on the sidewalk, Andrew would be greeted by friends left and right.

Andrew’s younger brother Daniel, a Butler graduate, said that while he felt like he knew a lot of people at Butler, he couldn’t compete with Andrew.

“It’s insane because Andrew knew almost everyone,” Daniel said. “You [couldn’t] walk on Butler’s campus for more than like one or two seconds without multiple people coming over saying ‘Andrew, Andrew!’”

Raising the morale of both students and staff, Millbrooks talked about how the daily 10 a.m. staff meetings in Atherton won’t be the same without Andrew. Everyday, without fail, every meeting ended with Andrew saying, “One, two, three, go Bulldogs!”

Along with his laugh that could fill the entirety of Atherton, Millbrooks said she’ll just miss how Andrew made her feel. Describing Andrew as a joy to work with, Millbrooks said Atherton hasn’t been the same since he’s been gone.

Beyond working in Atherton, Andrew was also involved in Best Buddies and Special Olympics at Butler. Philip said Andrew’s big thing was to say, “Count me in!” whenever a new opportunity arose whether at Butler or in other aspects of his life. Eager to be involved in anything and everything, Jessica said that the excitement Andrew approached life with is something she’ll never forget.

“He had such a vibrant life, and was just so willing to jump into everything he could,” Jessica said. “He was just excited for life.”

Proud of himself and his involvement, Andrew was excited to advocate for the special needs community and to tell people about what it was like living with Down syndrome. A huge fan of all superheros, especially Spider-man, Andrew’s siblings said Andrew never viewed Down syndrome as something that held him back, but more like a superpower.

“In a lot of ways [Down syndrome] was like his opportunity to tell people about what it was like to live with it, and to advocate that people with Down syndrome can do everything,” Ellie said. “It’s not something that’s stopping him, it’s giving him different opportunities, and I think in every single thing whether it was Special Olympics, Best Buddies, church or his job, like he wanted people to know that that’s what made him special and made him Andrew Cutter. He was very proud of it.”

Not only proud of himself, Andrew was proud of his family. Offering a hug, a pat on the back or one of his famous smiles, Andrew was a support system and an uplifting presence to everyone he loved. Philip said that when the two of them would meet new people, Andrew would first proudly introduce Philip by saying, “This is my younger brother, Philip, and I’m his older brother Andrew.” Loving his family through highs and lows, Andrew never failed to let everyone know how much they were cared for.

“Even when I wasn’t very proud of myself at times, Andrew was still very proud of me,” Philip said. “Andrew was just a very good friend. He always knew how to uplift you even when you weren’t doing your best, and he always said the right things at the right time.”

Andrew left each place a little brighter than how he found it. Junior pharmacy major Jennah Worthington, who first met Andrew in Atherton and later got to know him better through Best Buddies, said that “it was impossible not to smile around him.” Simply put, Worthington said that when she thinks about Andrew she just thinks of happiness.

Faithful, kind, compassionate and a lover of Diet Mountain Dew, Andrew leaves behind a legacy that’s hard to sum up. A one-of-a-kind personality, the Butler community already feels the loss of Andrew Cutter, a Bulldog through and through. Jessica said it’s not even a question of hoping if people will remember Andrew, he was too unforgettable.

“I just know people are going to remember Andrew for how happy he was, for always smiling, for always being willing to give hugs, just sit and talk, to just genuinely wanting to hear how people are doing,” Jessica said. “He was just so excited to talk to people and show excitement for them and their lives.”

Andrew touched countless lives with his thoughtfulness and compassion. The multitude of stories people continue to share on his tribute wall attest to how loved Andrew was by everyone in his life.

“I think people will remember just how genuinely caring he was for everyone,” Daniel said. “No matter what type of day people were having, Andrew would just go up and help change that … So many people have written on his wall commenting how they would have a bad day and Andrew would completely turn it around, or they would be going through something and Andrew would recognize that and help to comfort them. I think the legacy he’ll definitely leave is just being a genuinely caring person to everyone he came in contact with.”

To show support for Andrew’s family, flowers and gifts can be purchased and delivered to the Markland Funeral Home. Additionally, a memorial tree can be planted in Andrews’s honor.