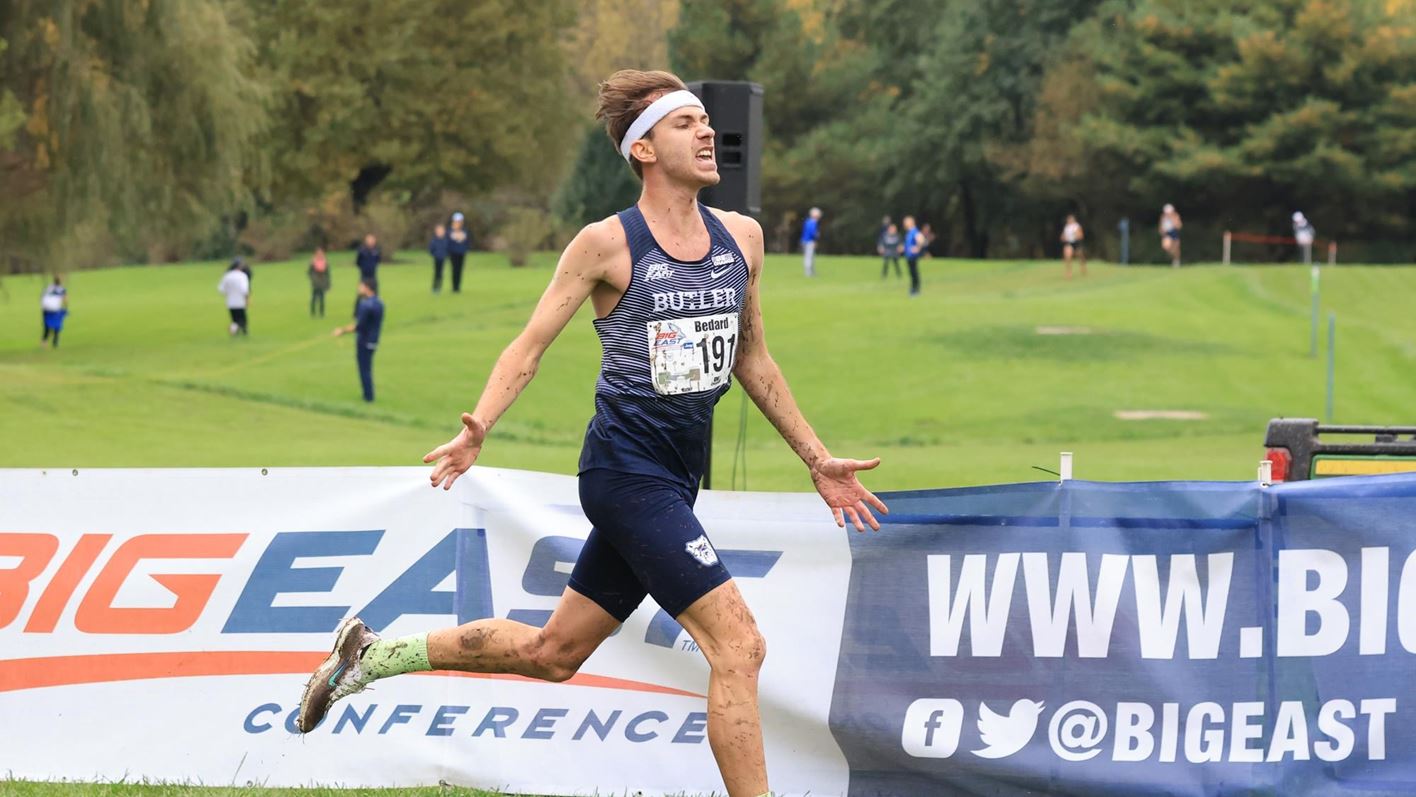 Graduate student Simone Bedard crossing the finish line during the Big East Conference Championship on Oct. 29. Bedard finished the 8k race in first place with a time of 23:58.6. The cross country team will travel to Bloomington, IN on Oct. 5 to compete in the Hoosier Invitational. Photo courtesy of Butler Athletics.

Men’s soccer will take on St. Johns in Queens, New York on Wednesday. The team is 6-8-2 and coming off a loss against Creighton.

The women’s soccer team is coming off of a big win in the Big East Quarterfinals against University of Connecticut and improve to 14-3-1. They will travel to Cinicannti to take on Georgetown in the Semifinals.

The men’s and women’s cross country teams will travel to Bloomington, Indiana for the Hoosier Invitational. The women are coming off second place in the Big East Championship and the men’s team placed first overall.

Women’s volleyball is traveling to Rhode Island to take on Providence for a Big East matchup. The Bulldogs are coming off of a loss against University of Connecticut. The team is 13-12 and 7-5 in conference play going into the game. The game will begin at 6 p.m. EST.

Men’s Basketball vs University of Indianapolis

Men’s basketball will have their second exhibition game of the season against the University of Indianapolis coming off their win against Tiffin. The game will be played at Hinkle Fieldhouse and tip off is set for 7 p.m EST.

If the men’s soccer team remains in the top six of the conference following their matchup against St. Johns, then they will play in the First Round of the Big East Championship.

Women’s Swim at University of Indianapolis

The women’s swim team will head to downtown Indianapolis for their swim meet against University of Indianapolis. The meet will begin at 1 p.m EST.

Pending a Butler victory in the Semifinals, the women’s soccer team will advance to the Big East Championship game in Cincinnati for the second straight year in a row. The Bulldogs fell to Georgetown 2-1 in overtime this past spring in the title game.

The volleyball team will travel to Omaha, Nebraska to take on Creighton. Creighton currently ranks first in the Big East and has the best record in both overall and conference play in the division. The game is scheduled to start at 2 p.m CT.

Men’s basketball will play their first game of the regular season against IUPUI. Butler is 6-0 against IUPUI in their last six matchups. Tip off is set for 6:45 p.m EST at Hinkle Fieldhouse.