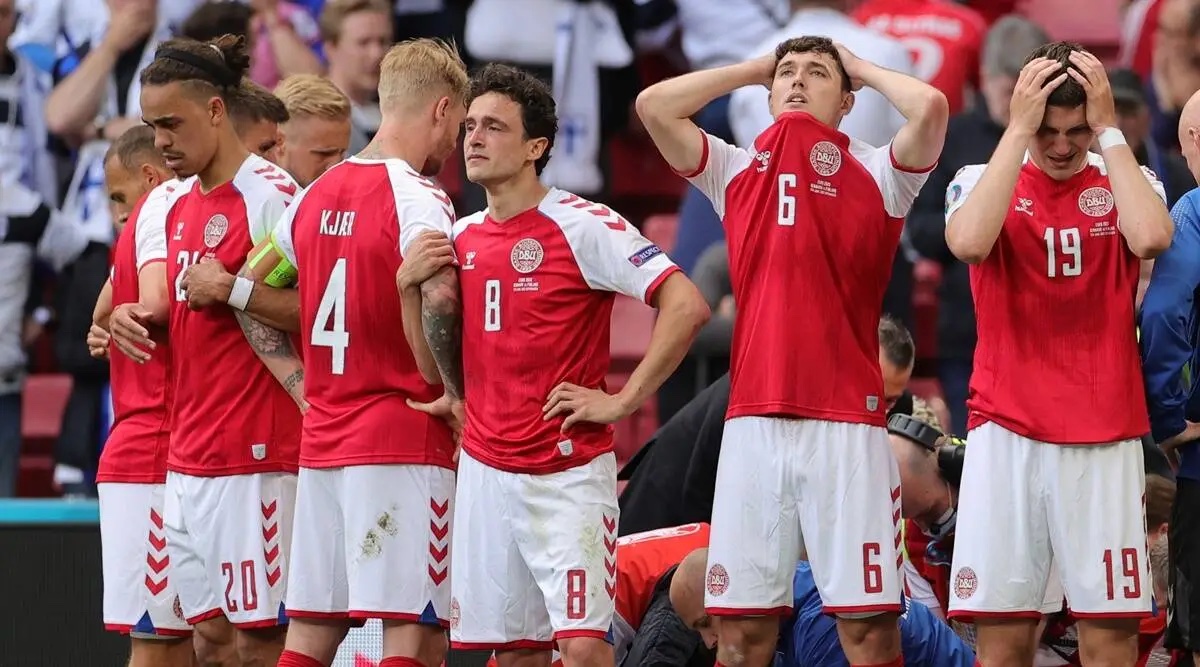 Danish Players in anguish after their teammate, Christian Eriksen, collapsed in their opening match of UEFA Euro 2020. Photo courtesy of Reuters.

FIFA has recently announced a proposal to transition the World Cup from every four years to every two years, starting in 2026. This proposal has sparked outrage in much of the world footballing community, all the way up to the executive level of the Union of European Football Associations, UEFA.

“We cannot decide to play in it … So good luck with a World Cup like that,” Aleksander Ceferin, president of the Union of European Football Association said in regards to the recent FIFA proposal.

At a glance it seems like a completely sensible move for the footballing community — more World Cups, more money and more notoriety. However, most players and national team federations are worried about a number of factors in terms of the players’ well-being and the organizational logistics.

For starters, clubs in the European Leagues would have even fewer weeks off than ever before, with some players already beginning pre-season camp in the early weeks of July and finishing in the last weeks of May. Additionally, players are required to play in certain international breaks throughout the club season, adding an additional two or three matches with their national team in a two-week timeframe.

There are between four and six international breaks in any given year, so some players that feature heavily for their national team could add between 12 and 20 games during their club season. Furthermore, some players in weaker national teams would be adding anywhere between 10 and 25 games a calendar year just to miss out on the World Cup.

If a European Club team was to make the Champions League Final — the last game of the club season, which is played typically at the end of May — many of their players would have to immediately report to national team camp, as the first week of June is often when players begin reporting for the World Cup. Essentially eliminating the short — but extremely important — summer break that lasts just a month for most professional players in Europe before preseason camp in July.

So what happens in years where there is no World Cup? Well, there are continental tournaments every four years — bi-yearly between the World Cup — but the shift to the new World Cup format would likely give national teams just one of every four summers truly off from international tournaments. That does not even include summer preseason club tournaments that are held in Asia and North America or other qualifying matches for national teams.

What happens if the European teams opt out, and the World Cup just goes on without them? Well that actually would have a massive impact on revenue and viewership. Since Brazil’s 2002 World Cup winning side, the World Champions have been a European nation, and no country outside of Europe or South America have won football’s biggest prize. Whether it was France, Spain, Germany, or Italy — the European nations have been largely dominant, and will more than likely continue to be. In the next few years it’s expected that Belgium, England and Holland could make deep runs in the tournament.

Furthermore, with the absence of the European nations, 15 of the top 20 teams in the world as of October 2021 would be absent from the tournament. While the concept would not go into effect until 2026, many of these teams are not going anywhere, with both young talent and players that continue to beat father time with stars like Luka Modric of Croatia playing well into their 30s.

While UEFA is clearly not pleased by the idea, the South American footballing community is not entirely opposed to the change. In fact, former Brazilian World Cup winner Ronaldo Nazário has said the idea provides, “… a new opportunity for new countries to have a chance to fight for qualification…every two years is amazing.”

Nazário — or R9 as he has come to be called — played for two pairs of arch rivals in Europe during the course of his career, first in Milan for Internazionale and AC Milan. Additionally, Nazário became one of the few football greats to play for both FC Barcelona and Real Madrid. Understandably, he has the grounds to back his claim. However, the physicality and tenacity of every match has only increased, and the footballing community only continues to see an uptick in injuries over the last decade in the youth players. Therefore by the time players reach professional years in their career, they have already become more susceptible to injuries.

One of the more devastating cases occurred recently when Danish International and Internazionale attacking midfielder, Chrsitian Erisken, collapsed as a result of cardiac arrest in the first half of the opening match for Denmark in UEFA Euro 2020. Eriksen was key to Internationzale’s title winning season before the summer tournament began and — at just the age of 29 — his career might have been shortened, if not ended.

Since the catastrophic episode in June, Eriksen has not played a single professional minute. A wizard on the ball with remarkable crossing and ability to see the field in motion, it would be a shame for the Danish star to end his career without a couple more seasons of sensational play in Europe’s top leagues.

Unfortunately, Eriksen’s episode is not an isolated event. The idea of inserting a second World Cup in a four year period only seems to threaten not only the thrill of a World Cup — but the fitness and longevity of players across the globe.

I would undoubtedly love to see the likes of young stars Kylian Mbappe and Erling Haaland take on the legendary defenders like Sergio Ramos and Thiago Silva every two years, but it simply is not plausible for the players to play in so many games.

If FIFA was to enact the two year format in 2026 officially, it would likely mean the end of players competing for club and country on a consistent basis. It’s not that players want to limit the number of matches they play, but rather their bodies are not able to take the punishment of playing in over 50 games every year.

At the end of the day the World Cup is so awe inspiring because of its rarity and uncertainty. Once every four years, we get a chance to see the best players of countries around the world leave it all on the field.

Whether it was Croatia’s inspiring 2018 run to the final or Andres Iniesta’s thrilling extra time winner to claim the 2010 edition, the World Cup is such an incredible atmosphere because of its unique nature. The allure, the awe, the action — it’s what makes the World Cup treasured. If the World Cup were to be every two years, the nature of the competition would be slowly diluted until it simply became just another tournament.

The World Cup has always been once every four years and there is no logical reason why the joy of its rarity should be taken.