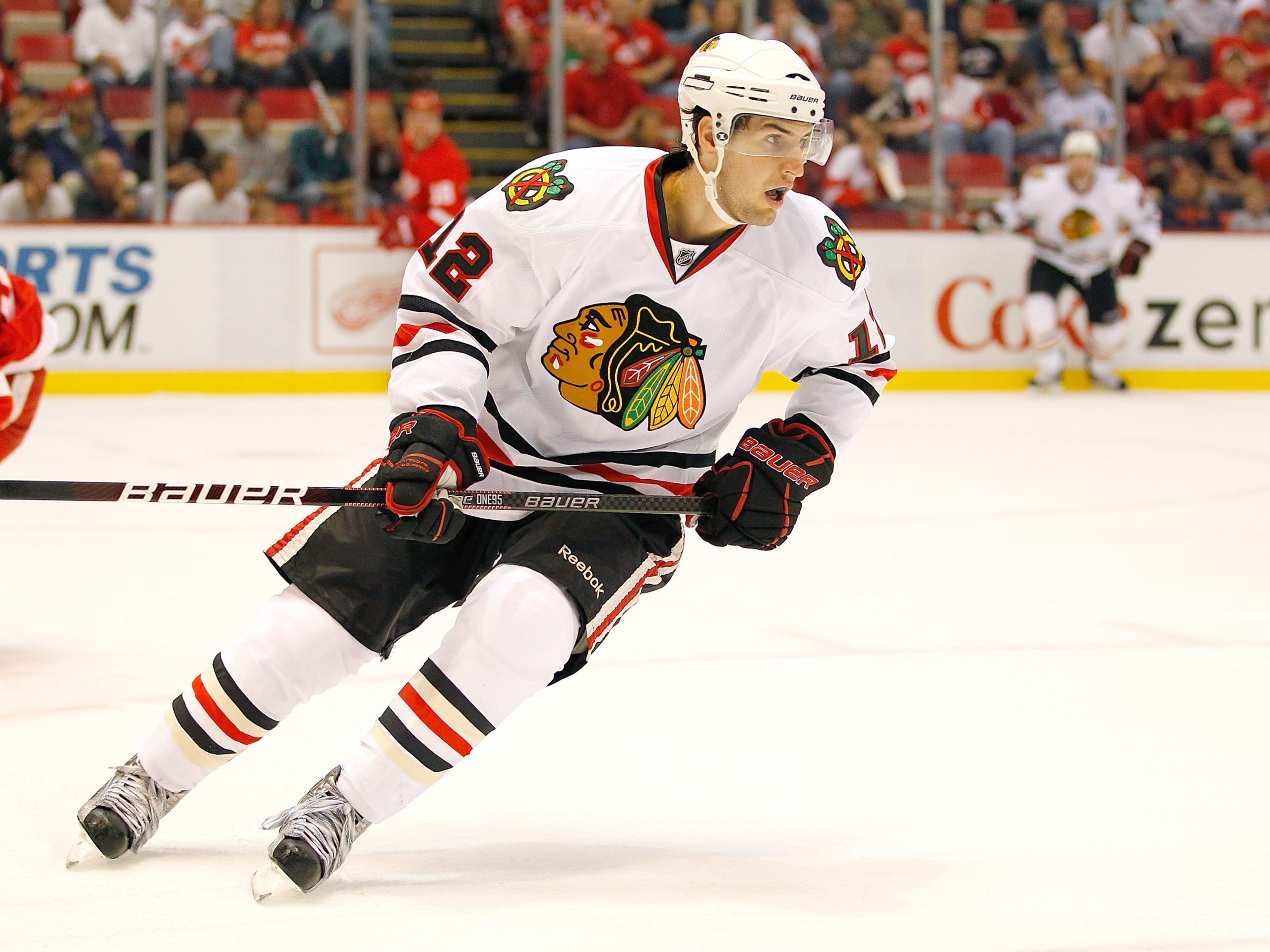 Kyle Beach skates across the ice against the Detroit Red Wings during a preseason game on Sept. 24, 2010. Photo courtesy of Gregory Shamus.

Over the past several years, the NHL has often been criticized when it comes to player safety due to its long history of questionable responses to concussion lawsuits and chronic traumatic encephalopathy, CTE, related player deaths. The issue of the league’s negligence and leadership flaws has now been thrust into the national spotlight with the ongoing Chicago Blackhawks sexual assault case.

In May 2021, an anonymous former Blackhawks player alleged that he was sexually assaulted by team video coach Brad Aldrich in 2010. The player filed a lawsuit against the Blackhawks organization for failing to address the sexual assault and failing to file police reports.

The case reached its climax on Oct. 27 when the anonymous player — Kyle Beach — revealed his identity on live TV. Beach appeared on TSN’s SportsCentre for a tearful, tell-all interview a day after the incriminating results of a months-long independent investigation were released.

Their cover-up included many horrible moral failures by the franchise. Blackhawks management cared more about winning a Stanley Cup championship than the health and well-being of their players. Their ignorance of the sexual assault led to Aldrich’s employment at colleges and high schools where he would go on to sexually assault more players.

All of these failures by the Blackhawks organization are egregious in themselves. However, both the NHL and NHL Players’ Association — NHLPA — need to be held accountable for their part in the sexual assualt’s cover-up.

Much of the blame lies with the NHLPA and their mishandling of Beach’s case. The NHLPA is the labor union for NHL players whose main role is to protect the players and their interests.

When Kyle Beach brought his case to the NHLPA in 2010, the players’ association placed his case under the drug and abuse category. A case placed under this category is confidential, and therefore unable to be released to authorities who could have stopped Aldrich’s behavior.

The NHLPA failed Beach as he was harmed by their lack of action. Instead of receiving the necessary help from the NHLPA in 2010, up until the release of the investigation’s results, Beach was forced to bottle up his trauma. Beach decided not to talk or even think about the sexual assault for 10 years in order to continue chasing his NHL dream. In his SportsCentre interview, Beach said burying the memories of his assault has destroyed him “from the inside out.” As a result, Beach turned to drugs and alcohol and struggled with behavioral issues.

The NHLPA’s mishandling of Beach’s case led other NHL players, such as Toronto Maple Leafs veteran Wayne Simmonds, to worry about the integrity of the players’ association. Simmonds said in a Nov. 3 press conference that his faith in the NHLPA was shaken over the Beach situation.

The failure to respond properly to Beach’s case goes far beyond the NHLPA. The NHL has mishandled knowledge of the lawsuit and has failed to adequately discipline those directly responsible for the sexual assault cover-up.

The NHL’s deputy commissioner Bill Daly said the NHL first learned of a potential lawsuit in December of 2020. Even though they were aware of the allegations being made, they refused to conduct their own investigation. The Blackhawks organization incorrectly claimed that a team investigation had already been conducted and that Beach’s claims were meritless.

In a case as serious as sexual assault, it would seem proper for the NHL to question the account of the accused franchise. However, the NHL did nothing to confirm the validity of the Blackhawks’ claims.

The NHL’s punishments of guilty parties have also been criticized. The Blackhawks organization was fined $2 million for its mishandling of Beach’s allegations. Compare this to the $3 million fine placed on the New Jersey Devils in 2010 merely for salary cap circumvention.

A case of sexual assault certainly seems more significant than violating the league’s salary cap. The punishment simply is not harsh enough. The difference in the two wrongs is that a salary cap violation only harms the functioning of the league while a sexual assault harms players.

The NHL ought to inflict a greater punishment with the hope of preventing any possibility that teams will ever cover up matters as serious as sexual assault. Instead, their current actions make it appear that they care more about the preservation of the league than the preservation of human decency.

The selfish concerns of the league were also made evident by NHL commissioner Gary Bettman’s defense of the league’s handling of punishments. In a press conference on Nov. 1, Bettman fought to defend the amount of the fine. Bettman said that the $2 million fine is a message to the Blackhawks organization and to the rest of the league that the handling of the Kyle Beach situation was inappropriate.

Is this actually a strong message to all NHL teams? The average value of NHL teams is $934 million. The $2 million fine is less than 1% of that average; it is 0.01% of the Blackhawks’ $1.36 billion franchise value. The fine does not seem to be that significant for the emotional trauma Kyle Beach endured due to the Blackhawks’ negligence.

Bettman’s defense for this lack of disciplinary action was based on the fact that Cheveldayoff was the least powerful person that attended the 2010 team meetings about Beach’s allegations. Bettman said Cheveldayoff was “such a minor player”.

There is a clear problem with this remark. Bettman is admitting that Cheveldayoff was still a player in the sexual assault’s cover-up. If he played any role at all, it is right to hand down some kind of punishment to him.

Also, as an assistant general manager, Cheveldayoff certainly had more power than video coach Brad Aldrich. As Aldrich’s superior, he had the power to act on the situation. Therefore, Cheveldayoff had the power to help Beach and he should have been reprimanded accordingly. Bettman and the NHL decided to maintain the current power structure in the league instead of doing what was right.

A widespread change in league ideals would hopefully prevent another situation like this from ever occurring again. The most important part of this change is that the NHL must prioritize protecting players rather than protecting its own name.

Another important part of this change is a shift in how we view sexual assault allegations. It happens too often that the victim of an assault is the one scrutinized most.

It would be better to treat the accused with more scrutiny than the accuser. This would definitely help to prevent the kind of suffering for the accuser that Beach had to endure.

In the end, there are signs that the NHL is starting to change for the better. Blackhawks general manager Stan Bowman and former head coach Joel Quenneville are no longer with the team. On Nov. 4, the NHLPA approved an independent investigation to be conducted into their response to Beach’s situation. The Boston Bruins watched Beach’s interview together as a team to ensure that their players and staff understood how to prevent this situation in the future.

These are certainly steps in the right direction, but the NHL still has a long way to go to truly become an honorable league.