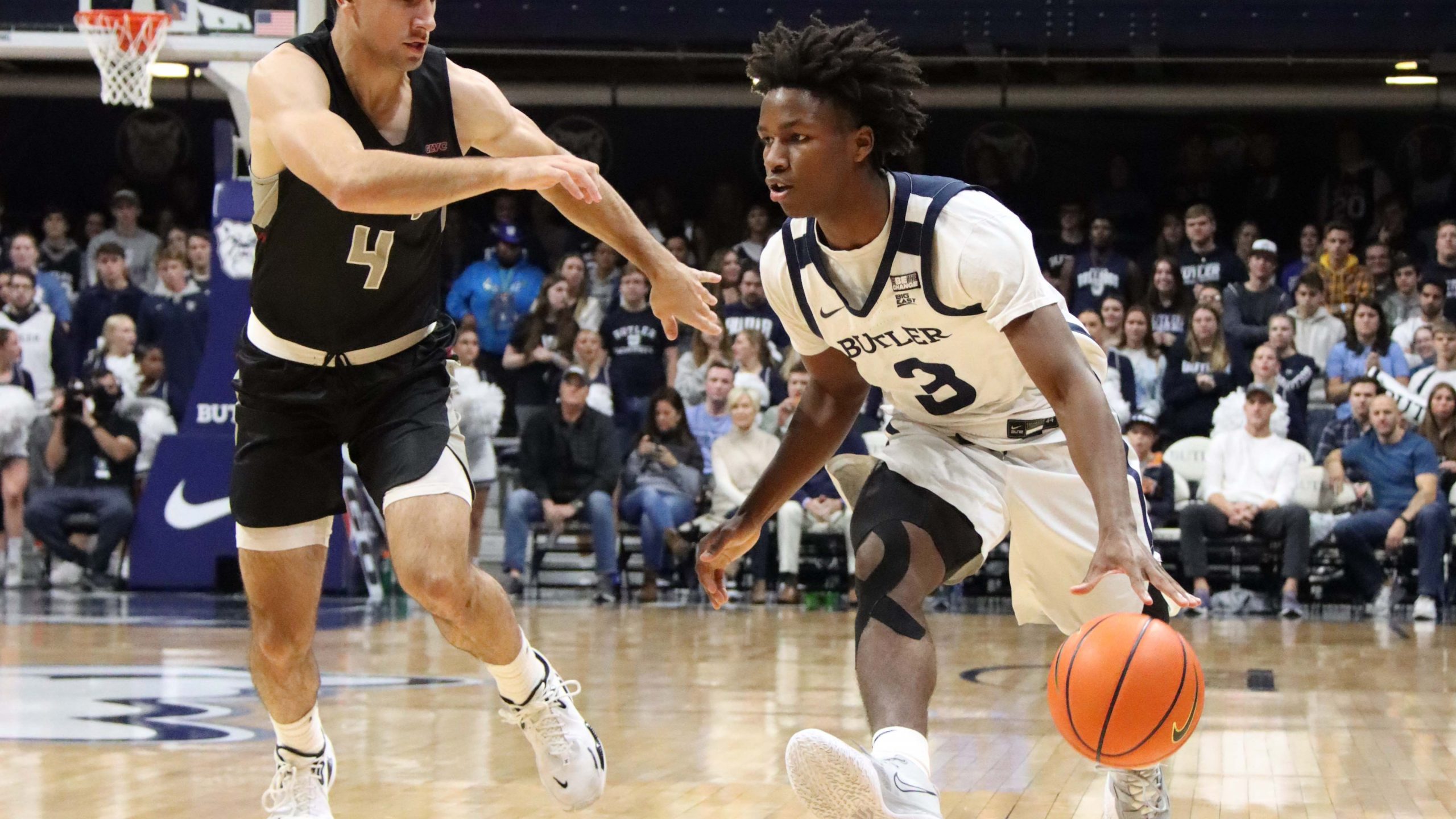 Sophomore guard Chuck Harris dribbles past a UIndy defender in their contest on Nov. 9. Photo taken by Francie Wilson.

After opening the season with a gritty — and not so pretty — win against IUPUI on Tuesday, the Bulldogs plan to put their talents on full display tonight against the Central Arkansas Bears. Without starting point guard Aaron Thompson, Butler will need to rely on sophomore Chuck Harris and some of the younger players to facilitate the offense. This game will be a good chance to grow some team chemistry and build confidence.

Who: Butler vs. Central Arkansas

Expect the offense to score early

That shouldn’t happen again tonight, as Central Arkansas allowed their opponents to average 45% from the field last season. In their first regular-season game, the Bears allowed Saint Louis to shoot 51% from the field. Butler is capable of doing just that, as they averaged a field goal percentage of 55% in their two exhibition games.

Be on the lookout for Harris and freshman guard Jayden Taylor to take advantage of one-on-one matchups and get to the free-throw line early. The Dawgs were able to capitalize their time at the stripe against the Jaguars, shooting 82%. Consistent drives to the paint will also present opportunities for forwards Bryce Nze and Bryce Golden.

Freshman guard Simas Lukosius, who has shown promise in his role, has a chance to grow his rapport with his teammates. Cleaning up his turnovers — he had five against the Jaguars — will definitely be at the top of that list.

One aspect of Butler’s game that has improved tremendously this season has been the tenacity and aggression that the Dawgs have brought to the defensive side of the ball. Against IUPUI, they only allowed 18 out of 48 shots to fall for the Jaguars. Though their offense wasn’t clicking for them on Tuesday, Butler relied on their defense to keep themselves in the game. This kind of defense is what will keep Butler in games throughout the season, especially as the schedule gets tougher.

Butler gets a little help on this end tonight as the Bears’ leading scorer from last season, guard Rylan Bergersen, transferred to Eastern Washington following the 2020-21 season.

Since becoming the head coach in 2017, LaVall Jordan’s teams have a 49-14 record in Hinkle Fieldhouse. While last season wasn’t one that Bulldog fans want to remember, eight of the Dawgs’ 10 wins came at home.

In the last 61 home games against non-conference opponents, Butler has gone 60-1. Jordan and his Bulldogs will look to keep adding to that win column tonight.

Ty Groce will be available

Graduate-transfer Ty Groce will be available to play for the first time this season tonight. Groce missed both exhibition games and the season opener with an undisclosed injury. It wouldn’t be a surprise to see him in the starting lineup or at least get a decent amount of playing time. Groce, who transferred from Eastern Michigan, led the Eagles in points, rebounds and blocks during his redshirt senior year. At 6-foot-8-inches, having him on the floor will definitely add length and spacing to the lineup.