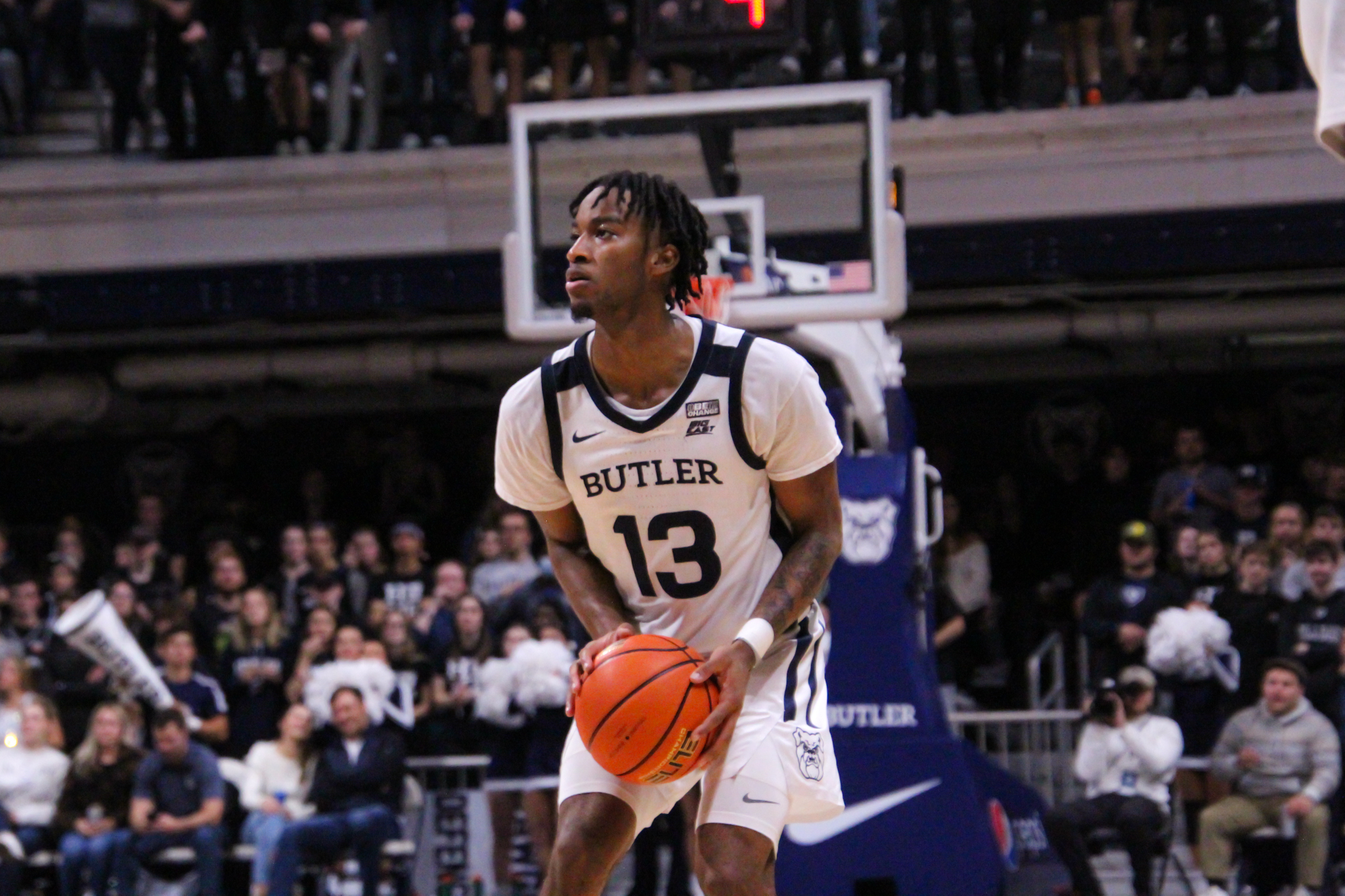 Freshman guard Jayden Taylor pulls up for a jump shot in a matchup against Troy on Nov. 12. Butler went on to win 70-59. Photo by Claire Runkel.

The men’s basketball team faces their first real test of the season when the Spartans come to Hinkle Fieldhouse on Wednesday. The Bulldogs are 3-0 heading into their first matchup against a Power Five opponent. Tip-off is at 7 p.m. and can be viewed on FS1 or listened to on WXNT 1430 AM.

With multiple records already broken this season, Butler swimming looks to continue to make waves when they travel to IUPUI for a long, three-day meet at the House of Champions starting Nov. 18.

Continuing their Big East play, the Dawgs will travel to Connecticut to face the Huskies. In their previous meeting the Dawg’s lost in three sets — with each set decided by less than six points. The Bulldogs currently sit in fifth place in the Big East conference and are 8-8 in conference play.

Both men’s and women’s cross country earned their tickets to the Big Dance in Tallahassee, Florida on Nov. 20. Both teams finished fifth at the NCAA Great Lakes Regional this past weekend, with graduate student Simon Bedard taking the regionals title for the men in the 10k race. The Dawgs are primed for a statement ending to an already impressive season.

After taking care of business in their previous meeting at Xavier, the Dawgs look to do the double over their rival at Hinkle. The Musketeers currently sit in eighth place in the Big East conference.

In the first of three guaranteed matchups at the Maui Invitational, the Dawgs will take on the No. 15 Cougars in Las Vegas at 4:30 p.m. EST. The Dawgs outcome against Houston will determine their opponent the following day. The game can be viewed on ESPN2 and can be listened to on WXNT 1430 AM.

Following their matchup against Houston, the Dawgs will play either Texas A&M or Wisconsin depending on the outcome of the first round of games. The game will begin at either 2:30 p.m. EST or 5 p.m. EST, pending a Bulldog victory or defeat. The game will be broadcasted on ESPN if Butler beats Houston and on ESPN2 should they lose.

The Dawgs prior two results will determine their final opponent on Wednesday. Until the first two games are played, the only determined information about the third matchup is that it will be on one of the three main ESPN channels —  ESPN, ESPN2 or ESPNU — and that they will face either Oregon, Chaminade, Notre Dame or Saint Mary’s. The game will be available for listening on WXNT 1430 AM regardless of the television channel.