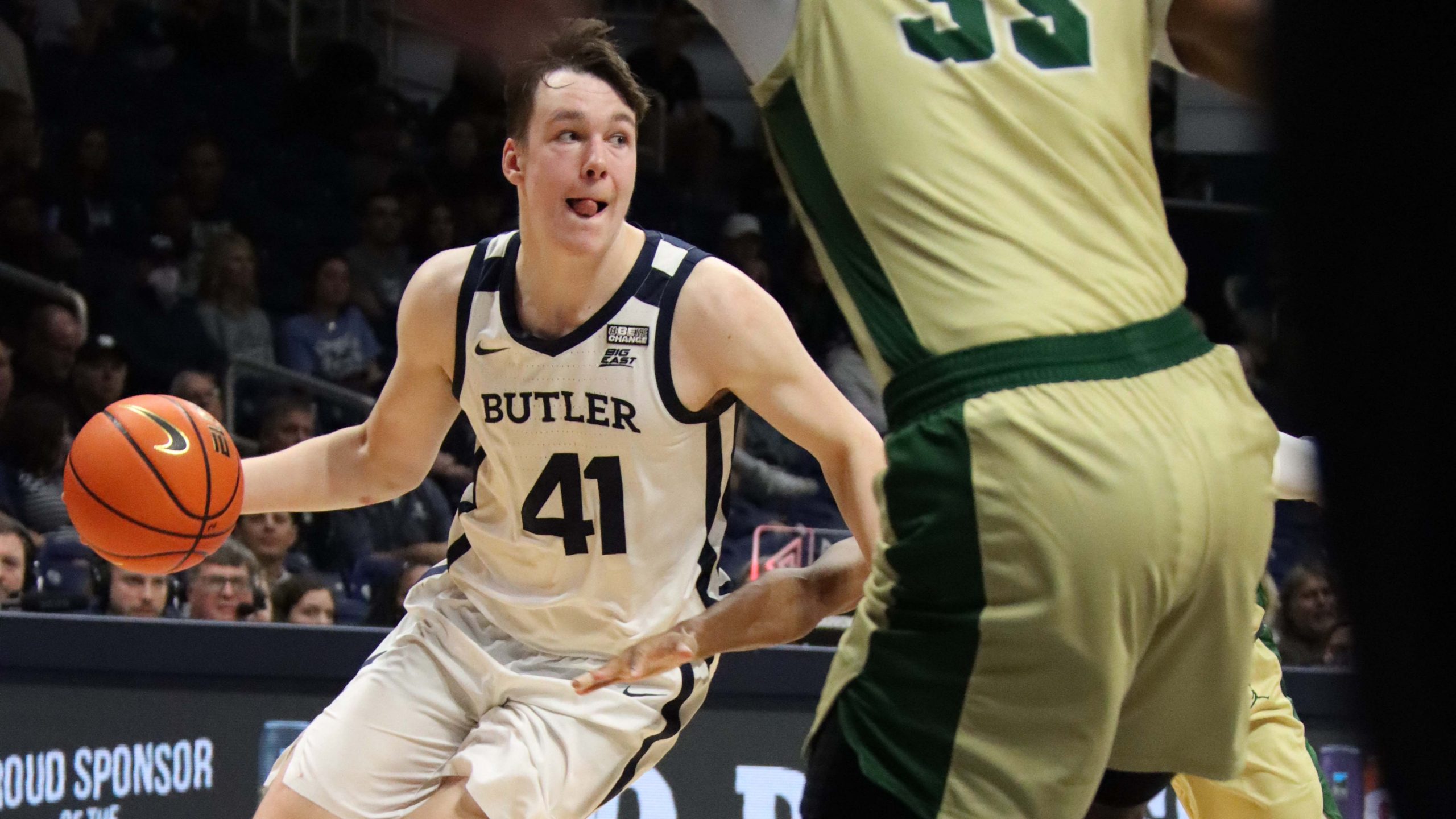 Freshman Simas Lukosius looks to make a play in the matchup against Tiffin University on Oct. 30. Lukosius was born in Kaunas, Lithuania and has played at the highest professional level in Germany. Photo by Francie Wilson.

Last spring, Simonas “Simas” Lukosius was left with one of the toughest decisions of his life. He could either stay in his hometown of Kaunas, Lithuania with his family and friends or he could choose to move across the Atlantic Ocean to pursue his dreams of making it to the NBA.

At a mighty 6-foot 6-inches and 230 pounds, the Lithuaiuan prospect was built to play ball. Lukosius has grown up surrounded by basketball his entire life.

“Ever since I remember, since I was born, I always had a basketball with me,” Lukosius said.  “My father was a player and he’s a coach now, so I guess that was just kind of built into me.”

Lukosius began gaining international experience at a young age. During the 2019-20 season, he first played competitively in Germany’s third highest league — the ProB — for Dragons Rhondorf where he averaged 14.8 points and 4.8 rebounds, while shooting 38% from beyond the arc and 91% from the free throw line.

Most recently, in the 2020-21 season, Lukosius was playing in Germany’s highest league — the Basketball Bundesliga, or BBL — for Telekom Baskets Bonn. During his time in the BBL, averaged 9.4 minutes, 2.9 points, 1.0 rebounds and 0.6 assists per game.

Butler alumnus Kelan Martin played in the BBL with MHP Riesen Ludwigsburg during the 2018-2019 season while Kamar Baldwin is currently playing for BG Gottingen in the same league. Baldwin currently leads the league in scoring with 22.2 points and has helped the team to the best record in the league through five games.

Following the conclusion of the 2020-21 season with Baskets Bonn, Lukosius made a decision that many 19-year-olds would be too afraid to even attempt — he wanted to play in the United States.

“Between my father and I, we planned for me to go to college and play in the NCAA,” Lukosius said. “I thought that’s the best thing for my development as a player.”

Lukosius began his search for colleges in the spring. He flew onto Butler’s radar as they scouted young talent in Europe. Assistant coach David Ragland believes Lukosius is a perfect fit for their style of play.

“We studied a lot of film, hours and hours of film on him,” Ragland said. “Doing recall, or recon of what type of person Simas is and his family history. How hard he works and other things like that, and it all checked out.”

Lukosius’s interest in Butler peaked when he received a call from head coach LaVall Jordan in May. Jordan is excited by the experience that Lukosius will bring to the team.

“He’s coming in with ultimate humility,” Jordan said. “He’s played some professional ball in the upper division with grown men, so he’s got a confidence about him that I can’t wait to watch.”

On Aug. 31, the Butler men’s basketball team officially announced that Lukosius would become a Butler Bulldog.

While Lukosius was ready to cross the ocean to meet his new team, he didn’t arrive on campus until the second week of school. He was forced to catch up in the classroom by attending his classes using Zoom internationally for the first two weeks.

Despite the massive cultural shift, he began to adapt and develop relationships with his teammates immediately. Freshman guard Jayden Taylor was one of the first people to help introduce Lukosius to the American lifestyle.

“As soon as we first met, we kind of clicked,” Taylor said. “We were actually at the airport when I asked him, ‘have you ever had Chick-Fil-A.’ He said ‘no,’ so I treated him to a Chick-Fil-A sandwich and Chick-Fil-A sauce, which he definitely enjoyed.”

Even small moments like this have helped Lukosius feel less alone. His new found teammates have helped him feel natural in his new environment.

“I feel comfortable already,” Lukosius said. “Everybody’s been really helpful. Working together with Jayden, Pierce and D.J., we’ve been building a close relationship together.”

While most freshmen deal with an adjustment period of getting up to speed with the intensity of the game level, Lukosius has adapted particularly well. Ragland has been awed with his ability to take everything in stride.

“Sometimes that transition is really, really hard for any freshmen, whether they’re coming from overseas or down the street,” Ragland said. “But the fact that he’s able to integrate his game with what we’re doing and vice versa is pretty impressive.”

Lukosius’ teammates have also taken notice of his abilities, with Taylor making a bold comparison to Lukosius’ game.

“European players like Simas just have that kind of swag to them, almost like a Luka Dončić,” Taylor said. “He just has a nice style to his game, so I’m really excited and looking forward to playing with him.”

“I was around 13-years-old when [Dončić] was playing in Europe for Real Madrid, and my dad was watching one of his games.” Lukosius said. “He told me to come downstairs and watch this guy play because he is going to be special. From then on, I began following and watching him grow into the player that he is today, so I kind of have a connection to him.”

Six years later, Lukosius is focusing on getting ready for the upcoming season in the NCAA.

While Lukosius’s pursuit for the NBA has led him on a wild goose chase from Lithuania to Germany to Indianapolis — his journey is far from over.

In his first exhibition game for Butler, Lukosius played for 23 minutes — recording eight points, four rebounds, two assists and one steal while shooting three for three at the free throw line.

Lukosius will make his regular season debut for the Butler basketball team at their home opener Nov. 9 against IUPUI to a packed house inside Hinkle Fieldhouse.