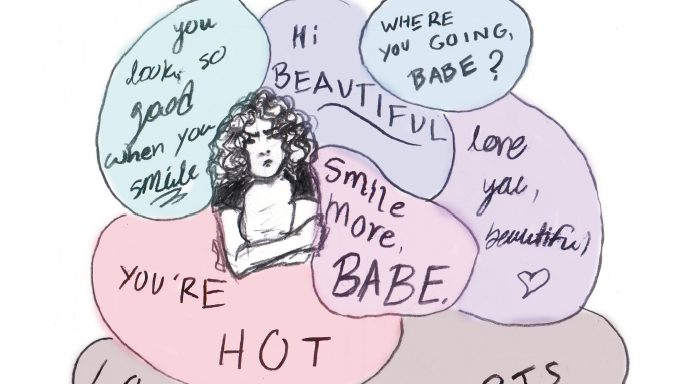 Depiction of common comments made by harassers. Graphic courtesy of Damali O’Keefe.

It was July of this year when I was vacationing with my family in Arizona. On the day we left our hotel, I was wearing a new dress. It was unlike anything I owned and made me feel confident and comfortable. As my family and I were loading the car to leave, I had to run into the building to grab my suitcase. Within the first few seconds of being unaccompanied, I heard “hey, gorgeous” uttered from the lips of a man nearly 60 years older than me.

Immediately, I felt threatened. I ignored him, ran into the building and did not come out until I was accompanied by a family member. I felt violated, objectified and ashamed of the outfit I had felt so confident in moments prior. It felt as though everything I am and everything I embody was diminished into a shallow depiction of me as a “pretty little thing” to degrade and objectify, when really, I am so much more.

It’s typical for women to avoid walking alone in hopes of lessening the chances of being assaulted — but whether or not a woman walks alone should not be indicative of the harassment she may receive.

Nothing truly prevents harassment from happening as long as harassers still exist.

Dr. Ashley C.F. Hutson is a lecturer for the department of sociology and criminology at Butler. Hutson wrote her dissertation on the issue of street harassment and she said that street harassment can span from being just an annoyance to an act of physical assault.

“Catcalling and street harassment is an enactment of power and domination that is often misinterpreted as banal in the lives of marginalized groups,” Hutson said. “The idea is, people often brush off catcalling — street harassment — broadly as just part of living everyday life in public.”

While anyone could become the subject of street harassment, some may find themselves more at risk than others. Women of color are disproportionately affected by sexual harassment and violence, leading to higher likelihood of street harassment being triggering. Hutson said verbal assailants often target victims based on socially significant traits.

“If it’s a woman of color, they may draw upon stereotypes of women of color, in particular races and ethnicities, in order to harass,” Hutson said. “If it is somebody who has survived or experienced sexual violence that may be very triggering, no matter what race or ethnicity or sexuality they identify with. Our experiences impact how we understand and perceive street harassment.”

Perpetrators may use stereotypes to further marginalize women — especially women of color — and they may specifically target vulnerable groups such as children.

Dylin Eazell, a senior communication sciences and disorders major, said her most prominent experience with street harassment happened in a dark parking lot when she was only 12 years old.

“This car pulled in, and it was two grown men [in their] 30s, if not 40s,” Eazell said. “They pulled up and they asked us how much for both of us. And when we explained … we weren’t prostitutes, we weren’t for sale, we’re underage … they just ignored us and kept talking over us and were like, ‘how much, we’ll give you money’. And he pointed to me and was like ‘she can go talk to my friend’. And [my sister] was like, ‘she’s 12’ and he just kept going on.”

Experiences with harassment — such as Eazell’s — can affect how a person lives their daily life. These encounters can feel extremely threatening, especially because it is hard to predict what may happen next, including how to respond and the consequences that come with each response.

Grace Lilly, a first-year communication sciences and disorders major, said her encounters have impacted her daily life to the extent that she no longer feels comfortable wearing what she wants to wear.

“Walking around … it can make me feel really unsafe,” Lilly said. “I’ve had experiences where I’ve been wearing more or [have dressed] more modest and it still has happened. I feel like you can really feel unsafe anytime, it doesn’t really matter what you’re wearing. Especially walking places at night, I think is when it affects me the most. But I’ve been so conditioned … to walk with other people or [to] always walk with a man with you or ‘if you’re walking with boys you’ll be fine’… I definitely feel like I can’t walk alone.”

Lilly is definitely not alone in her experience. Eazell echoes her sentiments, as she said the threat of street harassment has affected her mindset when it comes to what she wears.

“I feel like I’m a very free-spirit kind of person in body and dress,” Eazell said. “But it makes [me] conscious of like, ‘How are people going to perceive and treat me based on how I am dressed? How am I interacting with other people?’ And ‘are they going to take that as an invitation?’ I think that’s the biggest thing that impacts how I hold myself around others, because I am wary of them, I think just instinctually.”

The idea that somebody’s outfit is what dictates if they receive unwarranted attention or comments is a way of blaming the victim for the trespass committed against them. The responsibility is not on them to not be harassed, but rather on the public not to harass.

Why is street harassment considered a problem and not a compliment? Hutson said that it encompasses a lot more than meets the eye.

Street harassment is a display of dominance and power, which is what really makes it so hard to find a way to respond when targeted. If you respond by ignoring what was said, there is a risk of the harassers continuing to antagonize until they get a response. If you respond by calling out the behavior, there is a risk of threatened masculinity that can quickly turn into aggression. And if you respond politely, it not only reinforces the idea that the behavior is permissible, but there is a risk that the harasser will try to make advancements and use your response against you.

So, what can be done? How can we solve this issue and ensure a safe public environment for everyone to exist in? Eazell focused her answer on the perpetrators.

“I think that the approaching party needs to be a lot more aware of signals and body language, as well as the fact that some things just aren’t appropriate,” Eazell said. “Approaching minors is inappropriate. Making women obviously uncomfortable, making untoward sexual comments [is inappropriate] … I also think understanding your presence is fleeting, and you’re not owed any sort of response or acknowledgement.”

The psychology behind why people harass is one I fail to understand. How they can do so and either be oblivious to or fully aware of the threat and uncomfortability it imposes on the target is something that does not make sense to me.

Feeling like there is no solution to this issue is completely valid. When this is an issue that dictates so much of how someone exists — how they dress, where they go, who they go with — it feels impossible for street harassment to be solvable.

Dr. Hutson said that the solution lies far beyond the issue of street harassment.

“It’s not just calling attention to street harassment as a problem that could lead the way to a solution,” Hutson said. “Yeah, calling attention to the problem is important, but we have to understand the root of the problem, which is power, domination, inequality. And we have to undo that — consciously undo that — in every aspect of society before we’re going to see any real movement.”

The road to ending street harassment is long and unclear, but one way we can start is by having discussions about it — real discussions about the prolonged psychological and physical effects street harassment imposes on those who have experienced it. By identifying inappropriate and problematic behavior and calling it out, we violate the idea that what is being said is okay.

Next time you are in public and witness harassment, I encourage you to take action. Whether that is addressing the harasser or aiding the target out of that situation, there are many courses of action to take to help ensure the safety and well-being of those being targeted.

In the words of Dylin Eazell, “people need to stay in their lane.”

If you are interested in learning more about street harassment and taking action to put an end to it, I encourage you to look into ‘Stop Street Harassment’ and ‘Hollaback!’, two organizations who focus entirely on this issue.