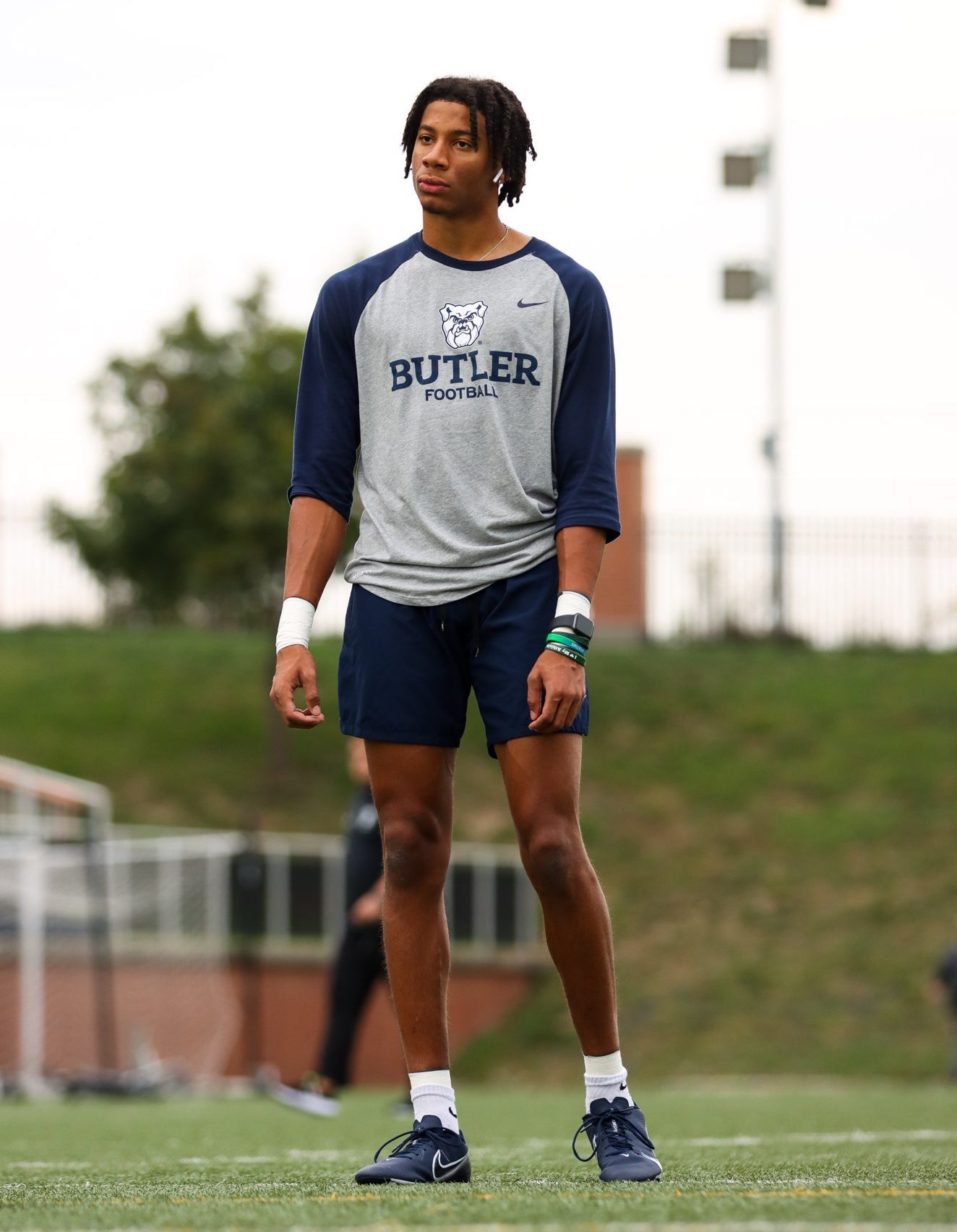 First-year wide receiver Thomas Brown during warm-ups prior to Saturday’s game against Drake on Oct. 2. Butler went on to lose 6-3. Photo taken by Chandler Hart.

This week, sports reporter Bella Riggione sat down with three first-years on Butler’s football team. Two out of the three are from out-of-state and they have all had a smooth transition into college.

TJ Newnum is a 6-foot defensive tackle from Zionsville, Indiana. He is a biology major who enjoys playing the guitar. Photo by Bailey Wydra.

Bella Riggione: What has been the biggest change from high school to college football?

TJ Newnum: The speed of the game severely increased once we got to college. Going back and even watching a high school game and seeing how it is so much slower and everyone is so much smaller and less skilled so it’s also a massive skill gap between high school and college.

BR: How did Butler stand out to you during your recruitment process?

TN: Butler stood out to me mostly because of academics. It is one of the best academic institutions in Indiana and definitely the best academic institution that I got an offer from to play football which was a huge part. I also really love the size of the campus and the student population. I think it is really a great size — it’s not too big and not too tiny like a high school so I really enjoy that.

BR: What goals do you have for yourself this season?

TN: I would like to play and travel, that would be absolutely awesome. Other than that I just want to get better, stronger, and faster, to work towards playing next year and get as much playing time as I can and hopefully get some dubs.

BR: How is the upperclassmen and lowerclassmen dynamic?

BR: What is your dream job?

TN: My dream job is to be an orthopedic surgeon because I want to stay close to athletics.

TN: My favorite sports team is the Indianapolis Colts, even though we suck.

Thomas Brown is a 6-foot-4-inch wide receiver from Raleigh, North Carolina. He is a sports media major and is a huge fan of the Carolina Panthers. Photo by Bailey Wydra.

BR: At what point did you realize you were good enough to play DI Football?

BR: How did COVID-19 affect your senior year football season?

TB: COVID affected a whole lot of my recruiting process because right when it happened I was supposed to go on a lot of visits and junior days and stuff where you get more interests, and I couldn’t because we weren’t allowed to go anywhere. My senior year season was also pushed back and was only six games long. I could only play in four because I had to sit out two for contact tracing which was even worse so [COVID-19] affected a lot of my stuff.

BR: Who is an upperclassman that has taken you under their wing?

TB: All the older receivers like Johnny O’Shea, Nate Rusk, Colin Kelly and Yogi Flager. They have all helped out a lot because the offense is not easy to learn.

BR: Who would you say is the funniest guy on the team and why?

TB: I would say, because he talks the most, probaby Mike Wellman. He’s hilarious, but there are also a few other guys too.

BR: Who is your number one supporter?

TB: My mom or my dad because they have been there forever. My sister as well — that’s my little support group.

BR: If you could play with any professional athlete who would it be and why?

TB: It’s gotta be Cam Newton, just because I’m from North Carolina, and I’m a huge Carolina Panthers fan. When he left that hurt but anyways, definitely Cam Newton because he plays quarterback and he can throw.

Alan, who goes by Deuce, is a 5-foot-11-inch linebacker from Cincinnati, Ohio. He is a criminology major who loves to go paintballing. Photo by Bailey Wydra.

BR: So I hear your nickname is ‘Deuce,’ where did that nickname come from?

Alan Shaw II: My dad’s name is Alan, and I am also named Alan, so I am the second, and my sister started calling me Deuce after that, and I just liked the name so I kept it.

BR: What is the biggest thing you bring to the team (skill set, metaility, etc.)?

AS: I would say mentality and fun. I like to have fun with everybody on the team while also pushing them in practice and to get better.

BR: Who is your favorite artist?

AS: Polo G is my favorite artist, I like him and his music a lot.

BR: How has it been juggling both academics and athletics since coming to Butler?

AS: It’s been good especially since the teachers are a lot of help and the football players are helping me a lot throughout the year with any questions I have, and so it has been a great experience.

BR: Who is an athlete you look up to and why?

AS: Isaac Kolosik, he’s a sophomore linebacker who helps me alot. We have a lot of fun and connection, and I just like hanging out with him. He’s a great guy.

BR: What has been your biggest adjustment since coming to Butler?

AS: The spaces between classes like extra time we have and how short the classes are because at my high school we had hour and 30 minute classes, and classes here are 50 minutes which isn’t that long.