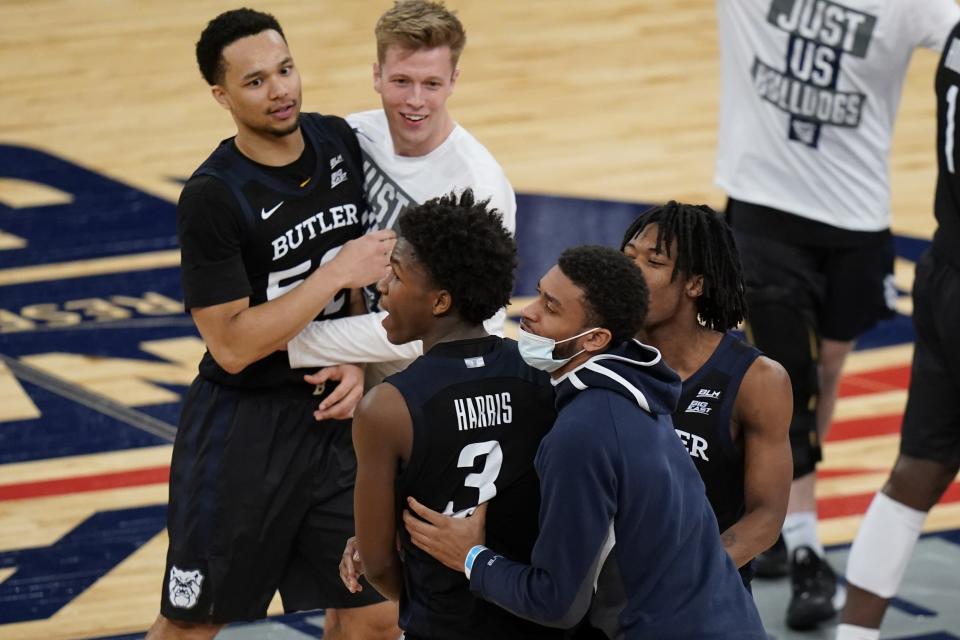 Coming off a three year March Madness drought, the Butler men’s team is ready to improve upon last season’s record and push for an NCAA tournament spot. The Bulldogs are taking on multiple ranked and out of conference opponents coming into the season, setting them up for one of their most difficult yet exciting schedules in years. With that being said, here are their top 10 games you don’t want to miss.

After making it to March Madness four times in a row from 2015-2019, and finishing as the AP No.15 ranked team in 2020, the Pirates experienced some regression in 2021 after losing their two time All-Big East player in senior guard Myles Powell. The main storyline for Seton Hall this season is finding their next “guy” to lead them back to the form. The Pirates hope to find their replacement for Powell in four-star commit Brandon Weston or Syracuse transfer Kadary Richmond.

Regardless, senior guards Jared Rhoden and Myles Cale are set to lead the way for this team coming into this season — both averaging double-digit points last year. The Pirates’ hidden talent is being able to get to and punish teams on the free throw line, ranking first in free throws attempted and second in made free throws per game, among Big East teams. The Bulldogs are in for a game, and should be able to pull out a win if they avoid getting into foul trouble.

Over the past few seasons, St. John’s has certainly had a tradition of doing one thing — putting up big numbers. The Red Storm has averaged 75.6 points per game over the past six seasons, including having the 31st highest scoring offense in the entire nation last season, and first during conference play in the Big East.

Led by junior guard Julian Champagnie — who was almost unstoppable averaging nearly 20 points per game last season — St. John’s hopes to keep torching teams with their offense. However, they are the literal opposite on the defensive side of the ball, giving up the most points to in-conference teams last year. This game will be a shootout, and if there’s one game where the Bulldogs could score their most points of the season —  it’s against the Red Storm.

This “Big East-Big 12 Battle” is set to be an entertaining one. The Sooners are ready to reload after a March Madness loss to Gonzaga in the second round last season. Winning is a tradition for Oklahoma as well, making the tournament seven times in the past decade.

They have a good mix of savvy veterans and incoming talent, including Eastern Washington transfer Tanner Groves, who averaged 17.2 points and eight rebounds last season. With an incoming class of three and four star recruits, this is a balanced, well-rounded Sooners squad that could end the season in the top 25. This will be a difficult game, but a great chance for Butler to prove themselves.

After beating Butler in the Big East tournament last season, the Bulldogs look to get revenge on the Bluejays. Creighton’s Sweet Sixteen run last season — their deepest March Madness run since the 1973-74 season — was huge for the program’s culture. Unfortunately, the Bluejays experienced a lot of senior turnover, losing their top three scorers in Marcus Zegarowski, Denzel Mahoney and Damien Jefferson.

However, the team brought in four four-star prospects along the way, ranking them the seventh best recruiting class in the whole nation. Creighton’s strength is their offense, specifically the three ball. Last season they ranked second in the Big East in points and first in field goal percentage and 3-pointers made. This could be a 3-point shootout, and the Bulldogs can win this game by keeping up with Creighton offensively and limiting the Bluejays’ 3-pointers.

One of the Annual Gavitt Tip-Off Games series poses an interesting matchup between the Bulldogs and the Spartans. Michigan State is almost a lock to go to “The Dance,” as they haven’t missed the NCAA tournament since the 1996-97 season.

Although they lost their leader in Aaron Henry, they more than made up for it with five-star commit and NBA prospect Max Christie — the No.1 shooting guard prospect in the nation — and two other four-star commits. He should make an impact right away, and the Christie-Chuck Harris matchup should be an exciting one to watch unfold.

The Spartans’ biggest strength last season was limiting their opponents’ 3-pointers, as their in-conference opponents shot the lowest 3-point percentage and made the second lowest 3-pointers per game against them. The Bulldogs will have to find a variety of ways to score against this tough Michigan State team to pull out the victory.

UConn comes into the season as the No.24 ranked team in the preseason AP Poll, with hopes to get back to the NCAA tournament after being eliminated in the first round last year. The Huskies lost their leading scorer James Bouknight to the NBA Draft, however seniors Tyrese Martin, R.J. Cole and Isaiah Whaley are set to pick up where they left off and could all average double-digit points this season.

Keep on the lookout for sophomore forward Adama Sanogo, as he was ranked 69th in his class and could pose a threat to the Bulldogs given his playing time. Connecticut has a great deal of talent and the best defense in the Big East, as they led the Big East in blocks and had the fewest points, rebounds and two pointers allowed in the conference. This is going to be a tough fight for Butler, but if they can prove to score against an elite defense — they’ll be sure to raise some eyebrows around the conference.

Butler will fly out to Las Vegas to compete in the Maui Invitational Tournament for the second time in school history — potentially playing some interesting teams in the process. The Bulldogs are slotted against Houston in the first round, who are ranked No.15 in the AP Poll coming into this season. Fresh off of a Final Four appearance, Houston has proven to be in the upper echelon of programs and will come ready to play.

That being said, they are losing three of their starters that helped them make it far in the NCAA tournament and are certainly beatable. Junior guard Marcus Sasser should be the main problem for the Bulldogs as the Cougar’s second scoring option, he is more than ready to step up and be a threat as this team’s number one guy. What brought the Cougars so far last season was their legendary defense, ranking second in the nation in fewest points allowed and holding teams to the lowest field goal percentage throughout the season last year. If Houston gets back to a similar level defensively this should be the toughest game for the Bulldogs this season. Regardless, this will be an interesting watch for a potential upset over the Cougars.

It’s always a good week when Xavier comes to Hinkle. Butler’s rival wants revenge after losing to the Bulldogs 70-69 in the Big East tournament and are going to bring their best game. The Musketeers are led by junior forward Zach Freemantle and senior guard Paul Scruggs, who could both average over 15 points per game next season. They also brought in four-star commit Cesare Edwards and a couple of transfers, including previous four-star Jerome Hunter and 7-foot Jack Nunge.

With a sound offense but below average defense, the Bulldogs can take advantage with good playmaking as Xavier allowed the most assists per game in the Big East last season. This game is an even matchup, but the energy at Hinkle could be the ultimate home field advantage and X-factor for the Bulldogs that leads them to victory. If Hinkle Fieldhouse gets loud for any game — it’s this one — and there’s not going to be many other games this season that Butler wants to win more than this one.

The Bulldogs face off against a tough Boilermakers team in the historic Crossroads Classic game. Purdue is coming into the season as the No.7 AP preseason ranked team, their highest preseason ranking in over a decade, and deservingly so. Big Ten All-Freshman guard Jaden Ivy is hoping for a strong sophomore campaign as he and All-Big Ten senior Trevion Williams prepare to run it back this season.

The Boilermakers also added four-star commits Trey Kaufman and Caleb Furst, who will add to an already dominant frontcourt. Speaking of which, 7-foot 4-inch Zach Edey from IMG Academy looks to provide a massive height mismatch against Butler’s big men. Butler doesn’t get to play teams as unique as Purdue’s often, and in a special All-Indiana match, both teams are going to be playing their hearts out in what could end as an amazing game.

How perfect of an ending to the regular season, as Butler faces conference powerhouse Villanova in what could be an NCAA tournament deciding game. The Wildcats are Butler’s highest preseason-ranked opponent, topping out at No.4 in the preseason AP Poll. They have a total of seven previous top-100 prospects, including two present ones in four-star commits Jordan Longino and Nnanna Njoku. Senior guard and preseason Big East player of the year Collin Gillespe is set to pave the way for Nova, after averaging 14 points and four and a half assists last season.

This team is a nightmare on both ends of the court, ranking in the top-30 in 3-pointers through the season, while having the second best defense and third best scoring offense in the conference. This is the team to beat in the Big East, and if Butler wants to make it to March — they’ll have to beat Villanova. If the Bulldogs are still in the running for a tournament spot, Hinkle will be roaring in this ultimate finale game.