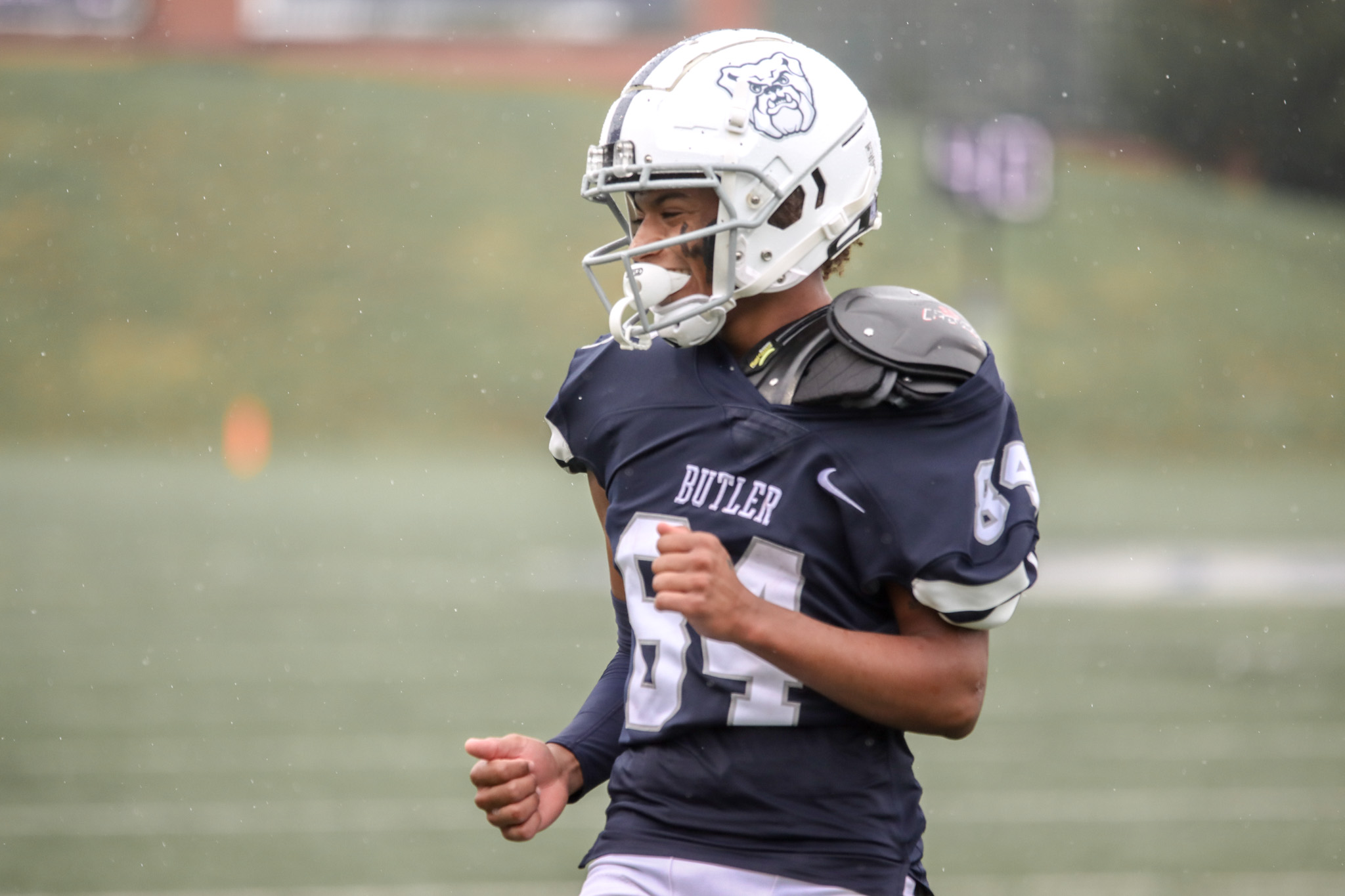 Butler wide receiver Yogi Flager celebrating after a play during a matchup against Drake University on Oct. 2. Photo by Grace Denckhoff.

The Butler football team fell to the University of San Diego 52-21 at home on Oct 9. The Bulldogs fall to 2-4 on the season.

Quarterback Bret Bushka was out for the game and was replaced by a back-up tandem of quarterbacks in Nick Orlando and Brody Reder.

On the Bulldogs first drive of the game, they fumbled the ball and defensive lineman Muhindo Kapapa recovered it to set up the Toreros at Butler’s 28-yard line.

Moments after, quarterback Mason Randall rushed 16 yards for a touchdown — putting San Diego on the board 7-0.

Butler responded with a three-play, 75-yard drive that resulted in Orlando finding an open receiver Nate Walker deep for a 59-yard touchdown reception.

At the end of the first quarter, Butler took the lead with Reder’s one-yard rushing touchdown — moving the score to 14-7.

San Diego responded  in the second quarter and scored on a 12-play, 86-yard drive when Randall found receiver Vance Jefferson for a 22-yard touchdown pass, tying the game up at 14-14.

The momentum shifted in the second half when running back Logan Gingg blocked a Butler punt and defensive back Chase Lyons recovered it on the Bulldogs five-yard line. On the next play, running back Rhyle Hanson ran the ball in for a five-yard score— giving San Diego the 24-14 advantage.

At the end of the third quarter, Randall hit receiver Christian Brown for a 32-yard touchdown pass moving the score to 31-14.

Early in the fourth quarter, cornerback Zamir Wallace broke up a Bulldog pass before cornerback Michael Hawkins came in and intercepted the ball, running it back for a 24-yard touchdown.

A few minutes later, Randall connected to Brown again for another touchdown, giving Butler no hope of coming back.

With under five minutes to go in the game, Wallace sealed the win with a 53-yard pick six and running it back to the endzone.

Butler’s final touchdown of the game was an 11-yard run from the redshirt freshman Reder. Bringing the final score to 52-21.

The Bulldogs will hope to end their losing streak next Saturday as they travel to Kentucky to play against the Morehead State Beakers.