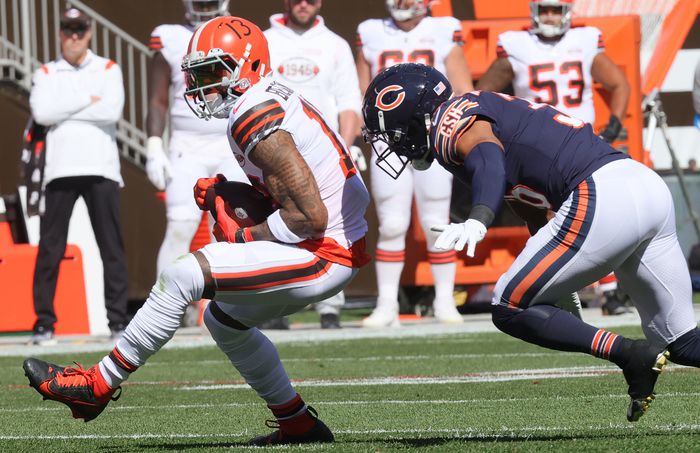 Cleveland Browns wide receiver Odell Beckham Jr. hauling in his first pass since recovering from his leg injury against the Chicago Bears on Sept.26. Photo courtesy of John Kuntz.

Four weeks into the season and the NFL is already down to just one team remaining undefeated — the Arizona Cardinals. On the other side there are still two teams in search of their first win — the Detroit Lions and the Jacksonville Jaguars.

Will the Cardinals stay undefeated? Will the Lions or Jaguars get their first win? With so many surprises each week, who knows what else the NFL has in store!

Regardless of the endless possibilities, the fantasy managers still have to set their starting lineups. Here are the key players to start and sit for Week 5 of the NFL season.

Ryan Tannehill, Tennessee Titans. The Titans are a mess. One week, they can go out and hammer the Indianapolis Colts, and the next week, they can gift the New York Jets their first win of the season. While the run game has been very consistent, Tannehill and the Titans passing game needs some work. In his defense, his top two wideouts Julio Jones and A.J. Brown were both out last week, and have a chance to return this week. Even with all the struggles on offense, Tannehill has a chance to redeem himself against a Jacksonville Jaguars team that is currently on a 19-game losing streak. Watch out for “Tannethrill” this Sunday as he will look to increase the Jags losing streak to 20.

Jalen Hurts, Philadelphia Eagles. Eagles fans are hurting. Ever since slamming the Falcons to the ground in Week 1, the Eagles have lost three straight with their latest loss by 12 to the Kansas City Chiefs. Despite all the negativity surrounding the team, Hurts has been averaging 348 yards total yards and two touchdowns on offense each week. However, Hurts will have a tougher time continuing his tear against a Carolina Panthers defense that has allowed the second least passing yards per game as well as acquired former Defensive Player of the Year in Stephon Gilmore. Hurts is an outstanding player, but this week’s matchup should force fantasy managers to be very cautious when moving him into the starting lineup.

Cordarrelle Patterson, Atlanta Falcons. If someone saw this back in 2014 there would have been so confused. Patterson — who was drafted as a wide receiver and special teams player by the Minnesota Vikings — is now not only listed as a running back on the Falcons, but has become the best running back on the team. Last week, against the Washington Football Team, he scored a hat trick, catching three receptions for touchdowns. While matching a stat like that is difficult, Patterson will certainly have another shot at big production against a banged up New York Jets defense. Patterson’s value has skyrocketed and has shown no signs of slowing down.

Melvin Gordon, Denver Broncos. No more cupcakes for the Orange Crush. The Broncos were dragged back to reality last week after they played their first game against a team with a win. Baltimore Ravens defense hounded the run game, leading to Gordon only running for 56 yards. This week, the Broncos will face another formidable foe as they face off against a Pittsburgh Steelers defensive front with a healthy T.J. Watt. Fantasy managers should leave Gordon on the bench this week.

DeVante Parker, Miami Dolphins. It is time to hit the panic button for the Dolphins offense. Ever since Tua Tagovailoa went down in Week 2, the entire offense has fallen apart. They currently rank second to last in total yards on offense per game. However, out of all inconsistencies on the team, Parker is the only player putting up reliable numbers averaging eight targets a game. With Will Fuller going down with a broken finger, Parker’s target share should only get larger especially against a Tampa Bay Buccaneers defense that ranks dead last in receiving yards allowed. Parker is a solid sleeper at the flex position for fantasy managers looking for a last minute replacement.

Odell Beckham Jr., Cleveland Browns. Browns fans can rejoice at the return of OBJ. After tearing his ACL last season, he is back and ready to tear up the field once again. The only thing standing in his way this week are the Los Angeles Chargers defense who have allowed the fifth least receiving yards per game. Their defense is loaded with talent and is coming off a week where they just held Darren Waller and Hunter Renfrow to under 200 receiving yards. With Baker Mayfield battling a major injury and the Browns facing a tougher matchup, starting OBJ this week would be very risky.

Tyler Conklin, Minnesota Vikings. Add a pass interference call to the list of reasons why the Vikings are one play away from being undefeated. Last week, the Vikings couldn’t get anything going on offense until the fourth quarter where they had a good play wiped away by pass interference. Fortunately for the Vikings, they get a favorable matchup this week against the winless Detroit Lions. While Justin Jefferson and Adam Thielen still own most of the targets in Minnesota, Conklin should still see plenty of chances to score against the weak Lions secondary.

Jared Cook, Los Angeles Chargers. The Chargers are finally playing up to their potential. The Monday night game against the Las Vegas Raiders was a real test for them and they certainly passed the test. Cook balled out leading his team in receiving yards and getting his first touchdown of the season. However, the Chargers will face a stronger matchup this week against the Cleveland Browns defense that has allowed the second least receiving yards in the league. While Cook may finally be getting involved in the Chargers elite offense, this week’s matchup is enough to hold off from moving him into the starting lineup.

Mason Crosby, Green Bay Packers. The Green Bay Packers are back up and rolling. The connection between Aaron Rodgers and Davante Adams has been restored creating nightmares for opposing defenses every Sunday. Crosby has seen similar success by staying perfect on all 17 attempts this season. The red-hot Packers then head into Cincinnati to play another booming offense in the Bengals. This matchup is sure to be high scoring, leading to Crosby receiving many opportunities to remain perfect on field goal attempts this season.

Dustin Hopkins, Washington Football Team. Every week, Hopkins continues to give Washington fans heart attacks when he goes out to kick a field goal. Washington’s kicker may have only missed one field goal all season long, but he has been able to get away with a few misses due to penalties. This week, he may have a harder time getting away with his kicks as they face off against the New Orleans Saints defense that has allowed fourth least points per game. Whoever has Hopkins in their fantasy lineups should think twice before starting him this week in another tough matchup.

New England Patriots Defense. The winner of the Brady v. Belichick battle goes to… Brady. The Patriots defense did a great job holding Brady down all game until the final possession where he drove the Bucs offense down the field and kicked the game-winning field goal. While the Patriots defense deserves more credit, they will certainly get a chance to redeem themselves with an easier matchup in the Houston Texans offense that has scored the fourth least points per game in the league. Belichick is angry after the loss and is ready to let it all out on the weaker Texans offense.

San Francisco 49ers Defense. The new Trey Lance era has begun in San Francisco after Jimmy Garoppollo went down with an injury. While this is great news for most 49ers fans, they still can’t forget about their recent struggles on defense. Last week, they allowed the Seahawks offense to roll right over them with 28 points. The situation doesn’t get any better this week as the 49ers will be up against the undefeated Arizona Cardinals who hold the best offense in points per game in the league. Any fantasy manager should be smart enough to know to keep the 49ers defense on the bench.