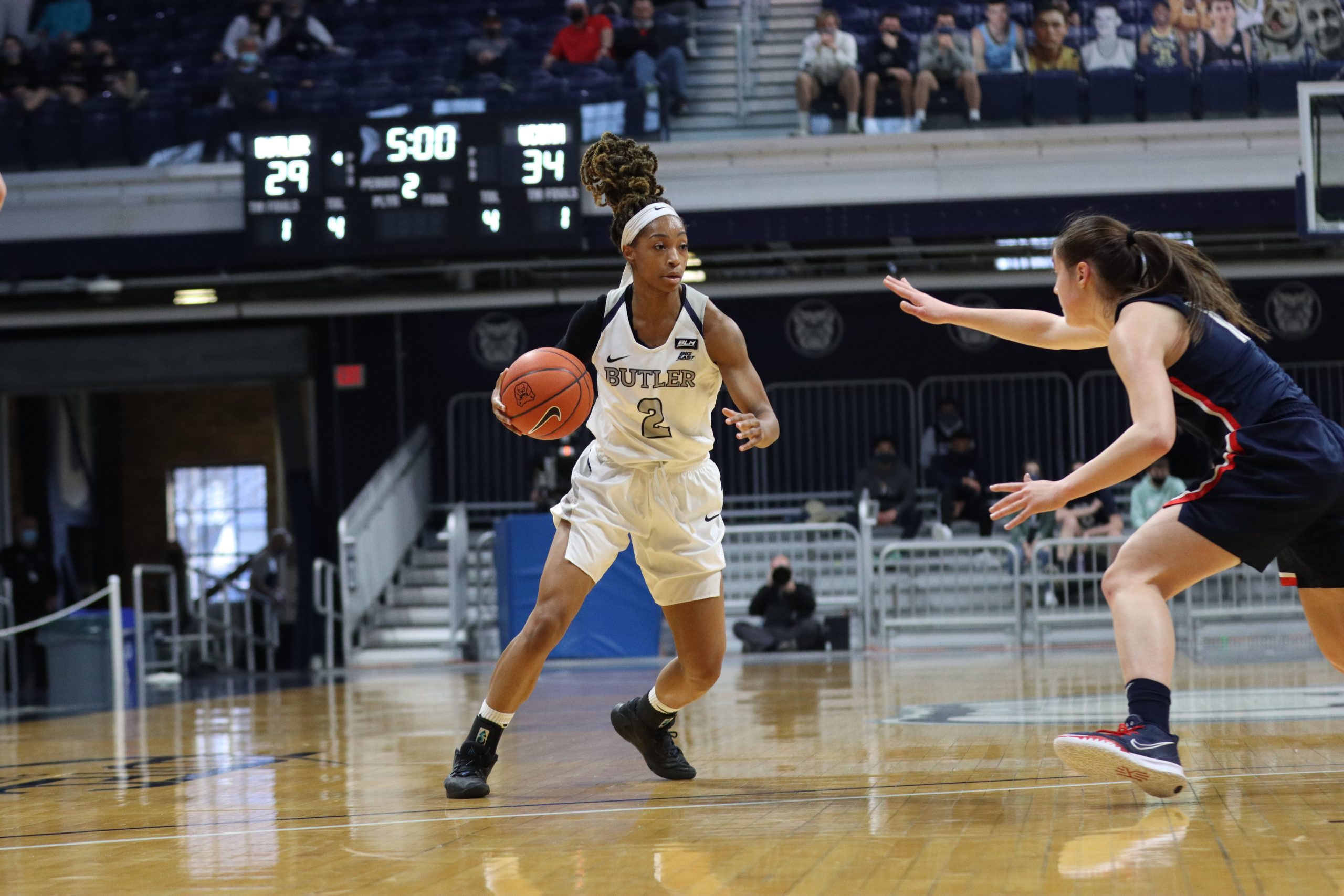 Graduate student Genesis Parker drives to the basket in a matchup against UConn on Feb. 27., 2021. The women’s team concluded the 2020-21 season with a record of 3-17, finishing second to last in the Big East conference. Collegian file photo.

As the weather cools off and winter closes in, Hinkle Fieldhouse will soon be filled with fans watching the Butler women’s basketball team kick off their 2021-22 season.

Similar to many other Butler teams, the 2020-21 season was a challenging one for the women’s basketball program. The team finished 3-17 last season, but despite the record, showed signs of promise and potential and now the team is poised for a rebuild in the 2021-22 season.

Even while navigating issues such as the COVID-19 pandemic and a poor start to the season, the program showed gains in important areas. In UConn’s first ever trip to Hinkle last year, the game recorded the highest attendance for a women’s basketball game in Butler’s history, despite the capacity limits due to COVID-19. With those limits lifted this season, it’s likely that the record will be broken again when the Huskies visit Hinkle on Jan. 12.

Heading into this season, the roster will look much different. The offseason hit the program hard, with four of the top five leading scorers transferring to different programs.

Last year’s leading scorer, Okako Adika, transferred to TCU following her stellar season on both sides of the ball. Freshman forward Nyamer Diew also left the program after just one season, transferring to Iowa State. She showed flashes of being a great defensive player towards the end of the season, recording 15 blocks in Butler’s final four games.

Six players from last year’s team will return — along with Jamilyn Robinson and Oumou Toure who did not play last season — leaving the roster open for new contributors. This season will be a mix of returning upperclassmen, freshmen and several transfers. In total, eight new faces will have a chance to see the floor for Butler this season.

Five freshmen will be joining the team for this upcoming season. Madison Royal-Davis, Trinity White, Zoe Jackson, Alex Richard and Sydney Jaynes will all be making their collegiate debuts this fall. Transfers Kendall Wingler, Celena Taborn and Kate Tanner will also be making their first apperance for the Dawgs in November.

With the many new faces joining the team, making sure all of the coaches and players are on the same page and meshing well will be imperative to the success of the team this season.

Head coach Kurt Godlevske has taken action to ensure that his team is all on the same page.

“This fall we did a workshop with the ladies to get a better understanding of [what] each and every individual’s personality is like,” Godlevske said. “What makes them tick, how to communicate with them, and how they like to communicate so we can develop some type of relationship or bond.”

Along with building chemistry, a significant amount of the rotation and starting spots still need to be determined due to the significant roster changes. With so many transfers and freshmen joining the team, it will be important for the coaching staff to determine who will be getting a significant number of minutes.

For returning players, the expectation is to improve off of the brief flashes of success from the prior year.  Graduate student Genesis Parker — who is the highest returning scorer from last year — has only one motive going into the season.

“I just want to win,” Parker said. “That’s the main goal for me, along with just playing together as a team.”

The other key returner is Tenley Dowell. In her freshman season in 2019-20, she was given the starting point guard position but suffered an ACL tear in her first game. She subsequently redshirted that season and returned last year. Dowell started 11 games last season, but playing with a knee brace clearly put a limit on her production. Now two years removed from the injury, Dowell may be ready to finally show her true potential.

The team has several big out-of-conference games that will put the relatively inexperienced roster to the test early on.

When it comes to games that they are looking most forward to, both Godlevske and Parker mentioned the exact same game — Nov. 10 versus No. 8 Indiana in Hinkle Fieldhouse.

“We’re really looking forward to the IU game,” Parker said. “I think it’s going to be a test for us to see where we’re at, and I feel like that will help us throughout the course of the season.”

Godlevske seconded Parker, believing the matchup will be a tone setter for the season.

“I think having IU come into Hinkle Fieldhouse with them being pre-season number eight is going to be an exciting way to start our season,” Godlevske said. “That game means a lot.”

IUPUI is another non-conference matchup that should be intriguing, as the crosstown matchup between the two teams has produced several very exciting games in recent years. Butler will also travel to Champaign to face Illinois, a Big Ten opponent which will pose an interesting matchup for Butler.

Along with exciting non-conference matchups early in the season, the team is also focused on conference play against their Big East opponents.

“I’m really looking forward to conference play,” Parker stated. “Just the competition, I just like playing against them.”

The Big East proved to be daunting for the team last season, as the team finished 3-15 in-conference, placing them 10th out of 11 teams. The Dawgs will look to turn their fortunes around this year as they begin conference play on Dec. 3 with a road matchup at DePaul — a team which has received top 25 votes ahead of the season.

The team will play their final home game on Feb. 27 versus Georgetown before beginning play in the Big East tournament on March 4.

While the Dawgs will have a tall order to fulfill, Godlevske has enjoyed every part of building this team for the grind that is ahead of them.

“There’s not been a day where I haven’t enjoyed practicing with them — and not every coach in the country gets to say that,” Godlevske said.