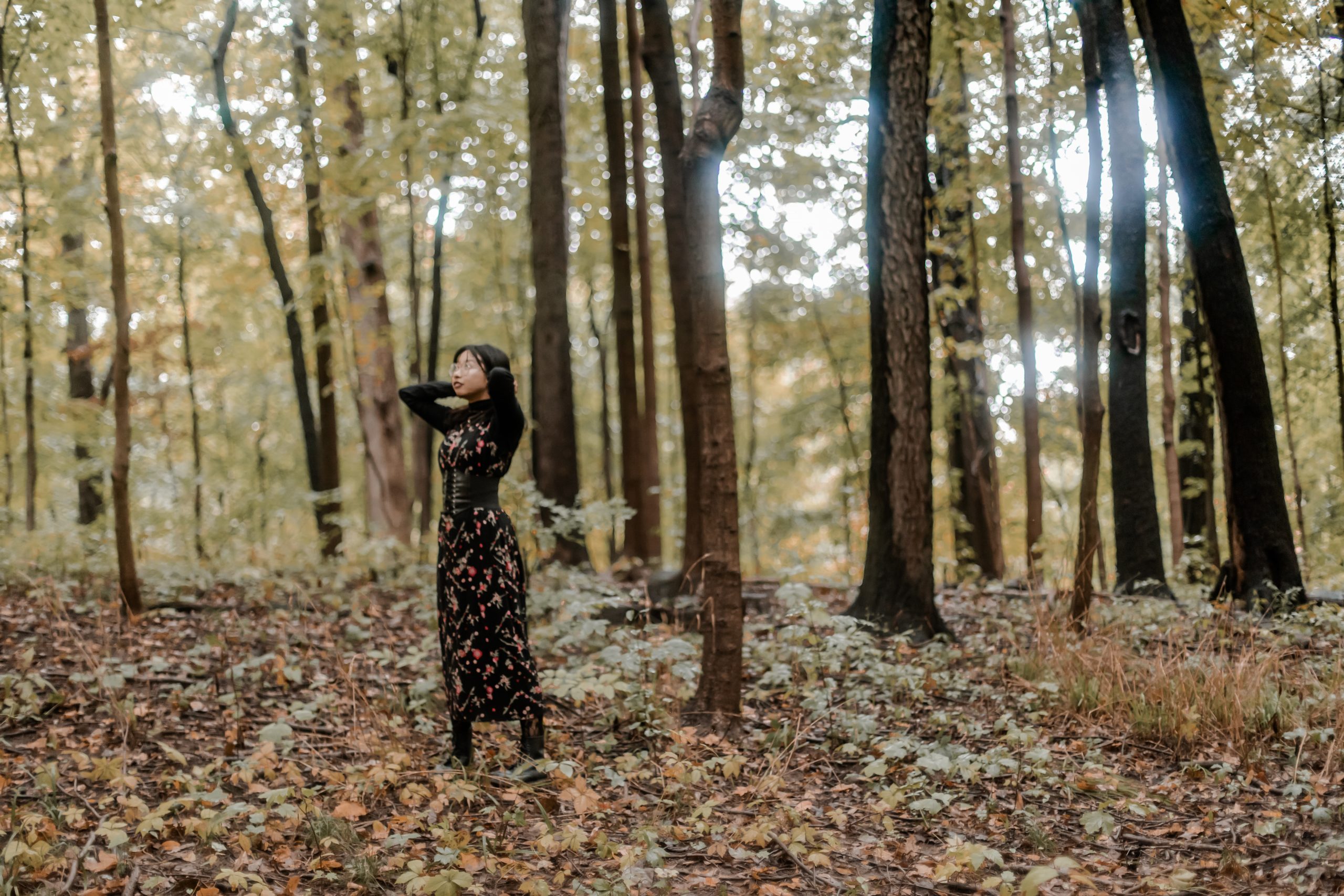 Mae-Mae Han shows off her fall-inspired attire on a rainy day in the ever mysterious Holcomb Gardens woods. Photos by Lauren Hough.

Gone are the days of “hot girl summer”  — rapper Megan Thee Stallion’s creation to empower all those who embody the sentiment of “being unapologetically YOU.” The sun has now hid its cowardly visage, and the leaves have begun to drench themselves in hues of amber and vermillion.

Nay, while the season of hot girl summer is no more — along with the armpit sweat stains that accompanied it, Butler students now welcome its successor in the chilly caress of “witch b*tch autumn,” the internet’s response to “hot girl summer.” “Witch b*tch autumn” serves as hot girl summer’s spectral sister, cryptic comrade and supernatural self: Megan Thee Sorceress, if one may be so bold to say.

Tread carefully, dear reader, for this sartorial codex henceforth provides rede and counsel for the full embrace of the autumnal aesthetic with its divining dress galore afforded when the spooky season stakes its claim in the world.

During “witch b*tch autumn,” draw inspiration from the hues that surround this magical time of year. In the spirit of All Hallows’ Eve, senior pharmacy major Lilly Boehmer finds her style becoming literally darker during autumn.

“I lean more towards the blacks and the reds, maybe more maroon tones, too,” Boehmer said. “Today, I’ve got the ‘all-black monochrome’ thing going on.”

Others find the whole spectrum of autumn’s transmuting leaves to be their muse in which to drape themselves in. Gabi Mathus, a first-year criminology and psychology major, is such a person.

“My [go-to colors in the fall] are just like, ‘what are the colors of the leaves outside?’” Mathus said. “We love green; we love red. I’m a big emerald green fan.”

Turtleneck sweaters offer endless outfit possibilities and are a staple for any witch’s vestiary toolkit. While they can be worn on their own tucked into bottoms, turtlenecks truly shine as a layering piece. Boehmer enjoys them layered under collared shirts for a vintage look.

“I think of my dad and what he wore in the 70s,” Boehmer said. “I have a couple of Butler rugby shirts, and they have a polo neck, and I’ll wear a turtleneck under those if it’s chilly that day, and I think it gives a nice layering look and also a retro vibe.”

Mathus uses turtlenecks as a way to continue donning the “hot girl summer” dresses of yesteryear well into the frigid months.

“[In the autumn, my ‘uniform’ is] probably something with a mock neck underneath it or a turtleneck, and then a dress over top of it,” Mathus said. “It’s super easy, but it makes you look so put together.”

Tights under dresses and skirts

While turtleneck sweaters keep the top half of one’s body warm during “witch b*tch autumn,” tights of all colors and patterns are the key to maintaining warmth in one’s bottom half — all whilst adding more personality to a look. Mathus enjoys wearing tights underneath skirts during the colder months to channel her “My Girlfriend is a Witch” energy.

“I also really like layering fun printed tights underneath skirts,” Mathus said. “There was an outfit that I wore this week where I wore tights that I got from Spirit Halloween with little stars and moons on them … [Utilizing tights] is something that people forget to do because it’s just so much easier to throw on a skirt and leave.”

Tights pair well with short dresses and skirts to continue wearing warm-weather clothes year-round. On the other hand, longer skirts can still showcase tights whilst allowing for maximum drama when sweeping through the candlelit halls of an abandoned castle or gathering spell ingredients in the midnight-black of a haunted forest.

“My go-to outfit is gonna be a button-down shirt with a sweater over it, and I pop the collar over my sweater,” Whittaker said.

With the collar visible, button-ups — whether they are long-sleeved or short-sleeved — can be layered underneath sweaters, sweatshirts and vests. Some may instead prefer detachable dickey collars if the bulk and warmth of an additional layer is undesirable.

To add a little bit of spice, jewelry can serve as a finishing touch to an outfit. Boehmer feels more creative freedom with both jewelry and hairstyles in the autumn compared to the summer.

“In the summer, I tend to just wear gold,” Boehmer said. “I feel like matching [jewelry metals in the summer] is really important, and they can be a little bit subtler because … there’s less things around your neck, so you can show off your necklaces. Whereas in the fall, I go for [mixed tone] chunky jewelry; I want as much jewelry as possible … [And] in the fall, there’s so much opportunity to wear [your hair] down or to do fun braids and stuff. It’s less humid out, so that gives you a great opportunity to [change up your hair].”

As for shoes, casual shoes such as sneakers are practical during the lengthy treks of long quests. For the mystical and mist-ical land of Indiana, Whittaker recommends a shoe with a slightly raised heel to avoid wetting one’s socks on rainy days.

However, the true High Priestess of autumnal shoes are boots. Boehmer covets her classic platform Doc Marten boots paired with patterned fishnet tights along with dresses and skirts. Mathus enjoys her own black boots to “[pull] in the ethereal, tall witch b*tch fall vibe,” but she also channels the energy of “witch b*tch autumn” through Oxford shoes.

“I love a good Oxford moment — anything that makes it look like I got into Harvard but humbly accepted to go to Butler,” Mathus said.

Ultimately, this manuscript should only serve as inspiration and not as a strict rulebook; all witches can and should carve their own path. Boehmer avered the opportunities beholden to those who take advantage of witch b*tch autumn to express themselves.

“There are quote-unquote ‘rules’ to dressing in the fall, but I really think that the most interesting outfits come when you play with those rules, and you make them your own,” Boehmer said. “I think if you’re just emulating somebody else, you’re not reflecting your own personality … Use [witch b*tch autumn] as an opportunity or an excuse to try things that are new.”

À la Taylor Swift, whether one embodies the lonely witch, the moonlit witch or the dancing witch, the mortals lucky enough to gaze upon your powerful corporeal form will have but one thought: “must be the season of the witch.”