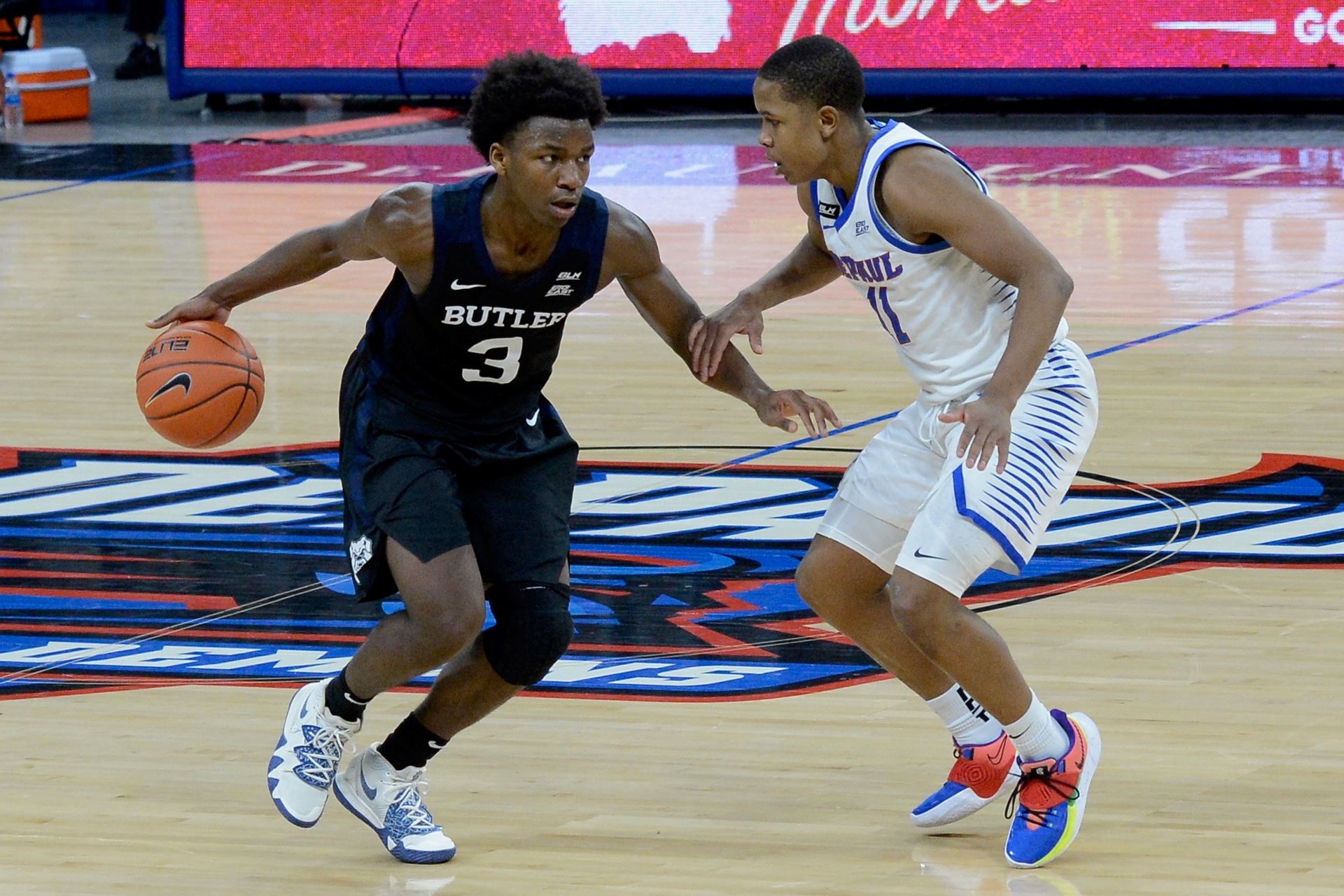 Chuck Harris dribbles against a DePaul defender in a matchup on Jan. 19, 2021. Photo courtesy of Butler Athletics.

The Dawgs return a seasoned roster led by their front court with a plethora of big men to dominate the paint for the entirety of the game. The biggest question lies in their backcourt as the Bulldogs are still looking to fill the void left by Kamar Baldwin in 2020. However, with the emergence of Chuck Harris late last season, the Bulldogs will try to link their experience with their upcoming young talent to make their first March Madness tournament since 2018.

In order for the Dawgs to achieve this, they need two things to happen: Chuck Harris needs to take over as that guy and Butler needs to dominate their conference games — especially on the road. Otherwise, it’ll be another year on the couch for the Dawgs come March.

The Bulldogs are coming off their worst season since 1992-93, but mediocrity should not be expected from the current team. Butler is returning more minutes played than any team in the country, and experience and leadership is crucial in college basketball.

Players like Aaron Thompson, Bryce Nze and Bryce Golden have been big contributors on very good Butler teams, and are now surrounded with a deep, versatile roster that focuses on defensive stability and a rising star in Chuck Harris. If Butler can improve on last season’s downfalls — primarily winning on the road and free throw shooting — they are set up for success, and success at Butler means playing in March. Don’t sleep on this Butler team or else you’ll feel silly while watching them in the Sweet 16.

Experience and chemistry go a long way in college basketball, and that is something Butler will have heading into the 2021-22 season. However, being able to win games on the road has to be emphasized for the Dawgs when conference play starts in December. Last year’s team was 1-9 when they traveled and had the worst road record in almost 30 years.

Expect Butler to break out the canvases and play in the paint this year with two great post scorers — Bryce Nze and graduate transfer Ty Groce. Butler will use these big men to draw in the defense, opening up nice looks from the perimeter. Defensively, this is an experienced team that has built up great chemistry and can communicate on that side of the court. If Butler can force a miss or a turnover they can push it down the floor and get easy transition buckets, as great defense leads to easy offense. When all is said and done, the Bulldogs will find themselves putting on their dancing shoes and prepare themselves for the tournament in March.

After watching Baylor knock off Gonzaga in the NCAA Championship inside the great basketball state of Indiana last season, there was one major takeaway — experience matters. Out of Baylor’s starting five, the youngest player was a junior. Just a few miles north on I-65, the Bulldogs will be looking to replicate a similar formula.

For the 2021-22 season, Butler added more players than they lost to their roster. The Bulldogs return 96.8% of their minutes from last year, which is the most in the country. The addition of graduate transfer Ty Groce from Eastern Michigan to pair with Bryce Nze will help Butler control the paint. Sophomore guards Chuck Harris and Myles Tate will be the engines that drives this offense. In their first season under head coach Lavall Jordan, Tate led the team in assists and steals, while Harris finished as the Bulldog’s top scorer earning him a 2021 Big East All-Freshman unanimous selection. Once Tate returns from his knee injury, expect the young duo to pick up where they left off wreaking havoc on opposing defenses in the Big East. Overall, with all the team chemistry and experience built up from last season, this team is made for another dance in March. Never count out an underdog, especially when the Mayor of March is on your side.

The Bulldogs are coming off of their worst season under LaVall Jordan and obviously will look to bounce back in 2021-22. With Aaron Thompson, Bryce Nze, Christian David and Jair Bolden all opting to take an extra year of eligibility, Butler will be amongst the top teams in the country in returning players. Despite the wealth of experience, all eyes will be on All-Big East Freshman team selection Chuck Harris, who is the first freshman to lead Butler in scoring since 1980. The team has lacked a go-to scorer since the departure of Kamar Baldwin two years ago, and this season will determine if Harris can be that guy for Jordan or not. Unless someone on the team can step up and be the go-to guy, Butler will have a hard time returning to the top of the conference.

Butler is coming off a year that saw the team struggle to find consistency during the season. Almost the entirety of the team will be returning this season, on top of the addition of a few freshmen and transfers. Aaron Thompson will once again be the anchor of the team, and will be vital to Butler’s performance this season. Along with Thompson, Bryce Nze, Christian David, and Jair Bolden also decided to return for the 2021-22 season and will be vital pieces in Butler’s rotation.

New transfer Ty Groce will also be an instantly impactful addition for the Dawgs, and will bring much needed size to Butler. Additionally, last season freshman Chuck Harris thrusted himself into the spotlight during Big East play, and quickly became one of Butler’s go-to scorers in the second half of the season. If Harris can take another step forward, it would be massive for Butler. With the return and additions of many players, expect Butler to make strong improvements compared to last year’s campaign. However, time will tell if it will be enough to get a tournament bid in March, and unless a player like Chuck Harris can consistently step up as the team’s clear cut No.1 scorer — Butler will likely find themselves in the NIT tournament once again in 2022.