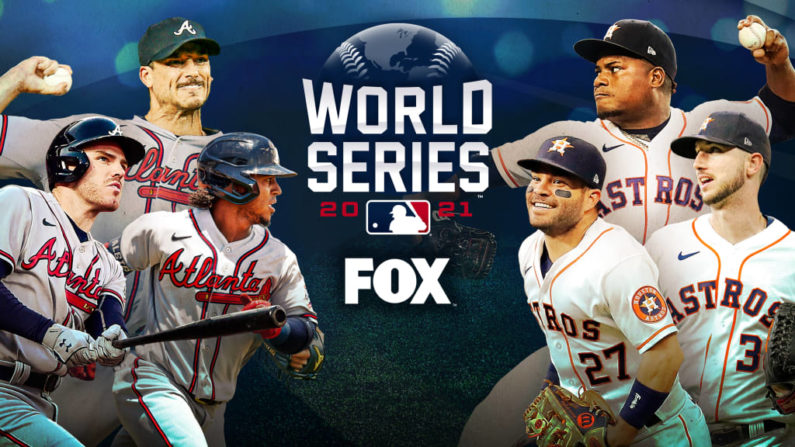 The Houston Astros face the Atlanta Braves for the 2021 World Series. Photo courtesy of FOX.

On Friday, the Houston Astros celebrated on their home turf when they eliminated the Boston Red Sox in six games. On Saturday, the Atlanta Braves dethroned the defending World Champion Los Angeles Dodgers four games to two. The Braves will be punching their ticket to their first World Series appearance since 1999 — the year they lost to Derek Jeter’s New York Yankees. Now after a long season, both teams will square off in quest of the best title in sports—world champions.

How did these teams get here?

This season, the ‘Stros finally had to face the crowd for their sign stealing scandal from their lone championship season in 2017.

The scandal had been broken right before the spring training of 2020, and due to the COVID-19 pandemic, the fans couldn’t fill the stadiums and bang on trash cans— something the Astros used to relay signs to the batters.

However, with the leadership of veteran manager Dusty Baker, the Astros returned to form after a down year in 2020. The team had the best offense in the show leading in categories like batting average, RBIs and runs scored. Due to their unstoppable offense, the Astros cruised to fourth AL West in five years with a plus 205 run differential.

Houston opened up the postseason against the Chicago White Sox where they dominated the South siders in four games. The Astros lost starting pitcher Lance McCullers, who racked up 10.2 innings pitched in his two appearances against the White Sox. He allowed just one earned run for a 0.84 ERA —Earned Run Average— before the American League Championship Series against the Boston Red Sox.

The team was led by their young designated hitter Yordan Alveraz who finished with an average of .522, three doubles, one triple, one home run and drove in six runs. Alvarez was the obvious choice for the championship series MVP. The Astros will be making their fourth World Series appearance when they take the field on Tuesday, seeking their second championship win.

When the 90s ended, the Atlanta Braves were dubbed “The Team of the 90s,” making five World Series appearances in the decade alone. The bad news for Braves fans is that the team never returned to the fall classic since losing to the Yankees in ‘99. This drought is attributed to some as a part of the “Atlanta Curse”. This “curse” affects the different sports teams in Georgia, like the Falcons and University of Georgia football team. They get so close to winning a championship, but always find some way to fall short. The Braves had the infamous infield fly rule in the 2012 Wild Card game against the St. Louis Cardinals. In 2019, the Braves were one win away from eliminating the Cardinals in four games before losing the fourth game in extra innings and watching the Cards score 10 runs in the first inning to eliminate the club. The next year, Atlanta slugged their way into the National League Championship Series in Arlington against the Los Angeles Dodgers. The Braves were up three games to one before losing three straight, sending the Braves home to watch the Dodgers defeat the Tampa Bay Rays to clinch a World Series.

Matters only got worse for Atlanta after the 2021 season began in April. Marcell Ozuna, who signed a four-year, $65 million deal, was suspended indefinitely by Major League Baseball due to an incident off-field. Then the star of the organization, Ronald Acuña Jr. suffered an ACL tear that ended his season in early July. At around that time, the Braves were in third in the National League East, and had a record around .500. Instead of packing it in and hoping for 2022, the Braves got aggressive and made some trades at the deadline. The team totally reshaped their outfield, acquiring Eddie Rosario from the Cleveland Indians, Jorge Soler from the Kansas City Royals, Joc Pederson from the Chicago Cubs and Adam Duvall from the Miami Marlins. Atlanta caught fire and went 42-25 in the second half to race past the Philadelphia Phillies and the New York Mets to clinch their fourth-straight division championship.

The Braves met the Milwaukee Brewers in the Divisional Series and won in four games after Freddie Freeman hit a clutch 8th-inning home run to finish off Milwaukee. The Los Angeles Dodgers, who were a wild card team this season, defeated the San Francisco Giants in controversial fashion to set-up the rematch from last year’s NLCS. Games one and two finished in similar fashions with walk-offs hits by Austin Riley, and Eddie Rosario for Atlanta to jump on the Dodgers two games to none. Two games later, like last year, the Braves found themselves up three games to one. Would the “Atlanta Curse” strike again? It sure looked like it after the Dodgers cruised to a nine run win behind three home runs courtesy of Chris Taylor. Game six was back in Atlanta, which meant a stadium full of Braves fans doing the famous “tomahawk chop.” The chop seemed to have worked as Eddie Rosario hit a fourth inning three-run-blast to put the score at 4-1. The game was getting late, and with the tying-run on second base for Dodgers, Braves pitcher Tyler Matzek struck out the side. The Braves used that momentum to clinch the pennant and redeem themselves from last year’s blunder. Rosario won the series MVP for his heroics in the series.

What could win the World Series, or lose it?

What separated the Astros from the teams they played was their ability to get hits in big situations, driving in more than 40 runs in two-out situations. The ability to get big hits propelled the Astros to defeat their opponents and bring a World Series back to H-town. On the other hand, Lance McCullers has been ruled out of the World Series, leaving the pitching rotation in a desperate position against the Braves. As mentioned earlier, Astros pitchers had a grueling time on the mound during the ALCS before Framber Valdez settled in for game five. If the Astros want to bring home the title this year, they’re going to need their starting pitchers to go deep into ball games and limit the damage against the Braves offense.

The Atlanta Braves, like their upcoming opponents, have also found clutch hits in big situations against the Brewers and Dodgers. Joc Pederson added to the firepower with some successful at-bats as a pinch hitter against Milwaukee. The Braves bullpen has also been critical to their run. AJ Minter, Jesse Chavez, and Will Smith all finished the NLCS with ERA’s of zero, and in the condition of modern day baseball, bullpens have been more valuable than ever. The same story applies for the Braves in what could hurt their Championship chances, and that is their starting rotation. If the Braves can somehow bridge their starting pitcher to the bullpen late in the game, the Braves could be very tough to beat, but this series could come down to the starters simply getting outs in big moments against a Astros team that has thrived in those spots.

Players to Watch for:

This six-foot-five, 205 pound mountain of a man has been tearing the cover off the ball this regular season and postseason. During the regular season, Álvarez had a batting average of .277 with 33 home runs,  and 104 RBIs. In this year’s postseason, the designated hitter has gone 15 for 34 at the plate, blasting a couple home runs and only striking out 11 times to his eight walks.

11 years, 1,565 regular season games, and in his sixth postseason run with the Atlanta Braves, the 2020 National League MVP has waited a long time to reach this stage. Freeman is by far the longest tenured player on the team, and has remained loyal to the club even through the rough years post-2013. If Freddie Freeman can find his swing in this World Series, the Astros will have to add Freeman’s name to an already loaded list of hot hitters in NLCS MVP Eddie Rosario, Jorge Soler, and Joc Pederson.

This World Series has a lot of parallels to the 2019 Fall Classic when the Astros faced the Washington Nationals. That year, the Nats started with a 19-31 record before turning the season around in the back half, sneaking their way into the playoffs and eventually winning their first championship in franchise history. For the Braves, many thought they were dead in the water after Acuña went down and the team was 48-49. But a team that has been on the ropes and bounces back has proven time and again to be dangerous. The Braves will ride this wave of momentum and snap a 26-year drought, giving the city of Atlanta its second world championship.