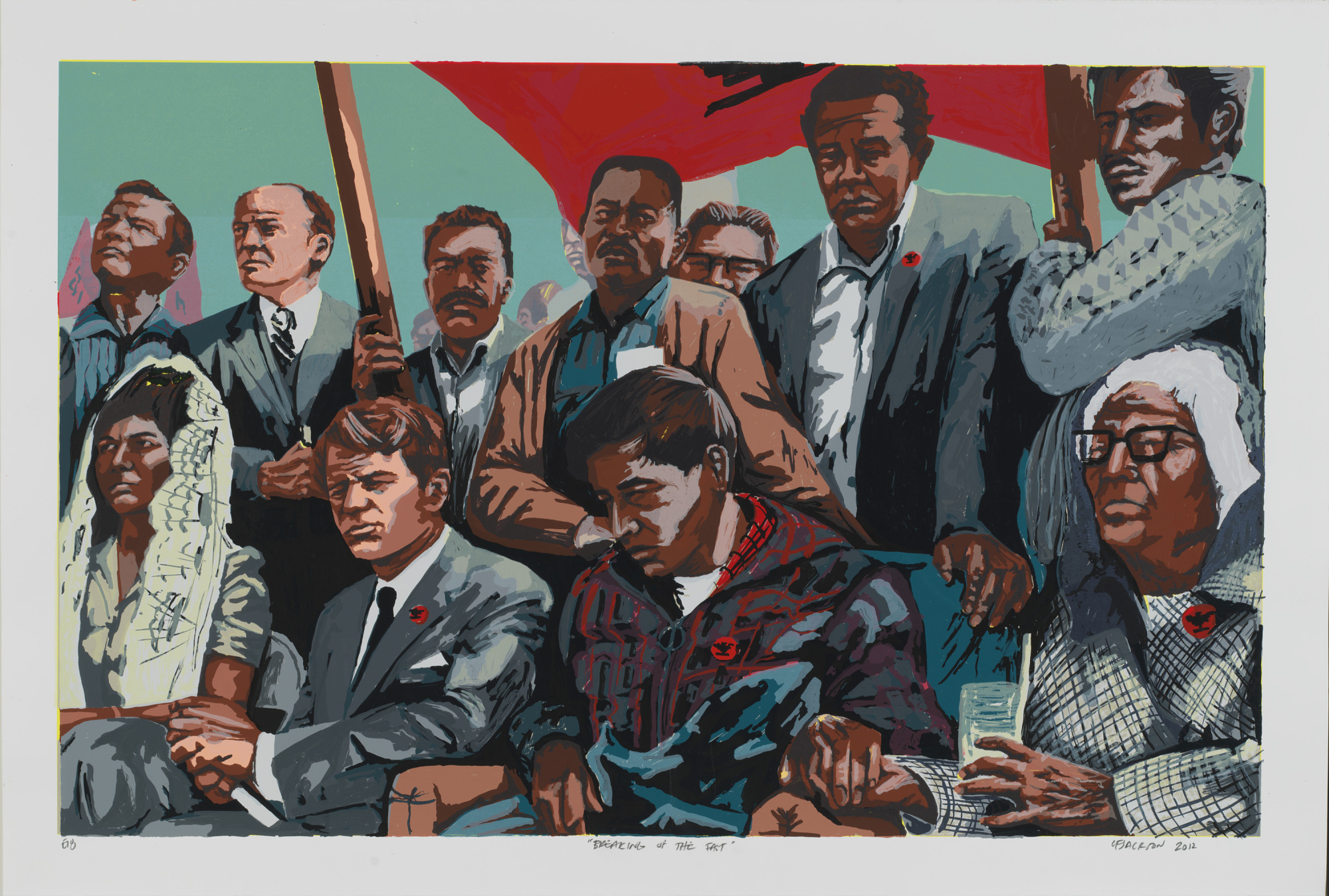 Sept. 15 to Oct. 15 marks National Hispanic American Heritage Month. The celebration originated as a commemorative week in 1968 declared by President Lyndon B. Johnson. Now a full month solidified into law in 1988 by President Ronald Reagan, these 30 days serve to “[honor] the cultures and contributions of both Hispanic and Latino Americans.”

Generally speaking, “Hispanic” is defined as relating to countries that predominantly speak Spanish: countries such as the Dominican Republic, Colombia and Spain; “Hispanic” does not apply to Brazil, a primarily Portuguese-speaking country in Latin America. Hispanic people can be of any racial ancestry: especially indigenous American, African and/or Iberian European.

However, despite its widespread usage and serving as the namesake of the heritage month, the term “Hispanic” did not completely originate from within the community itself. Rather, it was created externally “from above” by the Census Bureau in the 1970s as a means of categorizing a diverse array of people and cultures. Ericela Sahagun, a senior anthropology and history major who identifies as Chicana, explained why the label can be problematic.

“I think that [my friends and I] all understood that ‘Hispanic’ is sometimes not necessarily the term that is desired, solely from the historical aspect of the tie to Spain [and] trying to separate yourself from the colonization,” Sahagun said. “[Hispanic] wasn’t claimed by us; it was imposed on us.”

Due to the inherent etymological ties to colonization and a reductive, singular focus of what makes up this community, “Latino” grew in popularity as an alternative to “Hispanic” in the 1990s. “Latino” refers to Latin America: countries in Central America, South America and the Caribbean with histories of Spanish and Portuguese colonization. This excludes Spain but includes Brazil. Again, Latinos can be of any racial ancestry.

Sahagun said that younger generations including her peers are more likely to describe themselves as Latino.

Despite Hispanic American Heritage Month’s official inclusion of non-Hispanic Latino Americans such as Brazilian Americans, Yara Batista — a junior biology major born in Brazil  — still does not feel that Brazil is included in the month.

In addition, “Latino” is subject to criticism due to its “-o” gendered masculine suffix that many Romance languages utilize. “Latinx” arose as an inclusive, gender-neutral alternative to “Latino,” likely in the early 2000s. In fall 2020, Butler University’s student organization dedicated to the Latinx community changed their name from “Latinos Unidos” to “Latinx Student Union.” According to the group’s announcement on Instagram, the change was made in order to “[create] an inclusive and empowering #LSUFamilia on our campus for all Latinx students.”

A 2019 Pew Research Center survey found that younger people, those born in the United States, those with college experience and women are the most likely demographics to be familiar with the term. Alex Quintanilla, associate professor of Spanish and immigrant from El Salvador, sees it mostly used by heritage Spanish speakers.

“I think it’s more heritage speakers — those who identify as Hispanic but were born in the United States — [that use ‘Latinx’],” Quintanilla said. “Because inclusiveness: [“Latinx”] includes everybody.”

However, as it is a neologism, it still has not been adopted into common use. According to Pew Research Center, only 23% of self-identified Hispanic or Latino adults in the U.S. had even heard of the term “Latinx,” while only 3% actually used it to identify themselves. Sahagun, Batista and Quintanilla only first heard these terms in the past several years; Batista said “Latinx” does not even exist within Brazil.

Beyond sheer lack of knowledge of the term’s existence, “Latinx” has also received much backlash due to its awkwardness in Spanish, especially in the spoken language. Quintanilla pointed out how it is often criticized as being a forced Anglicization of Spanish.

“I heard a lot of negative reactions about ‘Latinx’ outside the United States or among people who were not born in the United States because we’ve never heard that [term before],” Quintanilla said. “Even though personally I understand the intention, I heard that people feel like it’s kind of an imposition from English because even in Spanish, you cannot pronounce the word ‘Latinx.’ … You have to do it in English.”

Though organic movements within Latin America to make the language more gender-neutral do exist, there are also some who argue that “Latinx” is too linguistically radical: not worth restructuring Spanish by ungendering the highly gendered Romance language and abolishing the way in which it regards masculine as the default.

As a result of such criticism, “Latine” — a word even more obscure than “Latinx” — was created as a gender-neutral word that is more grammatically correct and easier to pronounce within the Spanish language. However, it is very rarely used.

“‘Latine’ is a little easier to integrate in speaking Spanish,” Sahagun said. “I don’t know too, too many people that do use Latine other than scholarly work that I’ve seen.”

In spite of all of the discourse from Americans inside and outside of these communities that surrounds these identity terms, these words do not exist in the same manner in Latin America as they do in the U.S. Identity terms can serve functionally as a way to build minority coalitions, just as Mexican American activists and other Latin American communities did pre-1970, ultimately leading to the government’s creation of “Hispanic.”

However, they can also be an artificial means of categorization from the U.S. government; the very confusion surrounding these terms is indicative of the unique racialization that occurs in America. Sahagun expressed her uncertainty about what racial or ethnic demographic she is “supposed” to choose when identifying herself.

“‘Hispanic’ is what you see on documents and everything, so I struggle with [not necessarily wanting] to identify as ‘Hispanic,’” Sahagun said. “But I do end up [choosing Hispanic], just because it’s what people know of more and what the documents always categorize me as.”

“When I’m filling out forms, it’s like, ‘what’s your race?’ or ‘what’s your ethnicity?’ and I’m like, ‘Hispanic/Latino,’” Batista said. “But I only identify as Latino, not Hispanic, but I have to click that button anyway. I normally click on ‘other’ and just put ‘Brazilian.’”

With the vast array of nationalities and cultures that constitute Latin America, many people who would fall under the category of “Latin American” simply identify themselves as their specific country or countries of origin. This is especially true within Latin America itself where the over 600 million people are not externally grouped together in the way people of Latin American heritage are grouped together in the United States. A 2015 Pew Research study discovered that half of self-identified Hispanic American adults most often describe themselves in this way.

“In the Hispanic community, we don’t see ourselves as ‘Hispanic,’” Quintanilla said. “When you introduce yourself, like if you are at a party, I will never say, ‘I am Hispanic,’ or ‘I am Latino.’ You always say, ‘I am Salvadorian,’ ‘I’m Mexican.’ Everyone will usually use the specific country of origin.”

Ultimately, society evolves, and the language used by that society will continue to evolve with it. The Latinx community is composed of an infinitely diverse blend of people and backgrounds; a universally “correct” term is unlikely. Batista urges people to defer to each individual’s preferences of what they consider themselves to be.

“It really just depends on the person,” Batista said. “I’ve had people tell me that I’m Hispanic, and I say I’m not, and they tell me I am, and I’m like, who are you to tell me what I am?”