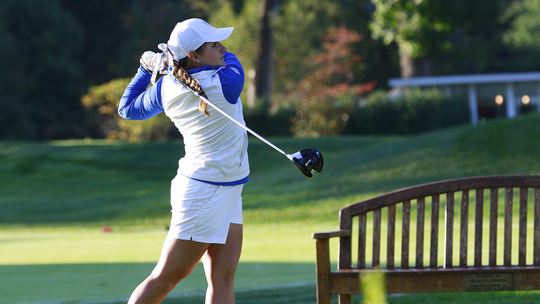 Ally Ross takes a swing during the Cardinal Classic on Sept. 20. Photo courtesy of Butler Athletics.

Butler women’s golf is in full swing for their fall 2021 season. The Bulldogs opened their season on Sept. 5 at the Redbird Invitational in Normal, Ill.

With the abbreviated 2020-2021 season only holding five events due to the pandemic, the Bulldogs are ready to return to normalcy with a fall and spring season including nine events and the Big East Championships to close the season.

Placing fifth in the Big East Championship in 2020, the team has enough steam to go and chase more this season. Head coach Christie Cates is in her third season and is aiming high to exceed expectations.

“I think on paper it is one of our strongest teams we’ve had since I have been a coach and/or player,” Cates said. “We broke a school record at our first tournament with a 54-hole out at Illinois State last weekend. We hit the ground running and I have really high expectations for the year.”

The Bulldogs will return eight players from last year’s roster, including 2021 first-team All-Big East senior Claire Edwards, and graduate students Katelyn Le and Ally Ross who are using their eligibility extension due to COVID-19. Topping off the roster will be a handful of poised juniors and a single sophomore — with the addition of three skillful first-years.

Even though the team possesses a skillful lineup, Coach Cates believes that they need to build upon their first tournament momentum and shoot for more.

“It showed that we’re capable of really high team finishes, but even with the 54-hole record we still left a lot of shots out there,” Cates said. “As a coach and player even if you play well there are still things you can improve upon, and that is what we are trying to do. I wouldn’t be surprised if we break that record again, the team is working super hard and focus is super good at practice.”

As a team, the girls went on to finish fourth out of 16 teams at the Redbird Invitational. Edwards finished sixth individually. The rest of Butler’s line-up scored under 80 consecutively throughout the tournament.

Entering her final season, Edwards is ready to take on a new level of leadership and put the pressure on the team to exceed results from last spring season.

“We made a really good run at it last year, we had a lot of good numbers put up and we placed at many tournaments,” Edwards said. “Our performance at the Big East conference was not ideal, so I am kind of hoping that our results lit a fire under the team to do better. Going into this season, I hope we maintain what we had before the Big East conference and continue to put up record-breaking numbers.”

Edwards is no stranger in trying to keep her head high when times are tough. She puts precedence on the team being able to solely focus on the game and stay present with their swing. The team’s concentration needs to ride out with them the rest of the year in order to come back stronger than last season.

“Golf is hard because there is always room for improvement no matter how many under or over you shoot,” Edwards said. “You are always looking to get better at something whether it’s your mental game or the golf game. Our first tournament will be really beneficial to look back on moving forward when we need a positive boost to dig deep when you have exams and other things going on in your life.”

Sophomore Alaina Bowie is looking forward to her first normal season with the Bulldogs following her last go-around being interrupted by COVID-19. Bowie finished her last season with a best round of 77, across three events. With collegiate experience under her belt, she is ready to make a statement this season.

“We are going to lose five players after the end of this year and having to fill their shoes just physically can’t be done,” Bowie said. “The personalities and talent everyone brings to the table cannot be replaced. So I am trying to find that balance of creating something new between what we did have. It will be a season of trying to find my role in where I play in the next stages.”

Along with finding how she balances out the team, Bowie is excited to see the contribution the freshmen will make to the program.

“They primarily bring a lot of new energy because we have so many seniors,” Bowie said. “They balance out the senior mentality with their freshmen mentality. Their work ethic and talent will bring a lot to the table.”

The Bulldogs are ready to improve from last year and take this season head-on with a talented roster in hopes of being successful leading up to the Big East Championship and beyond.

Butler women’s golf tees off next on their home turf at Highland Golf Course for the Butler Fall Invitational on Oct. 4-5.