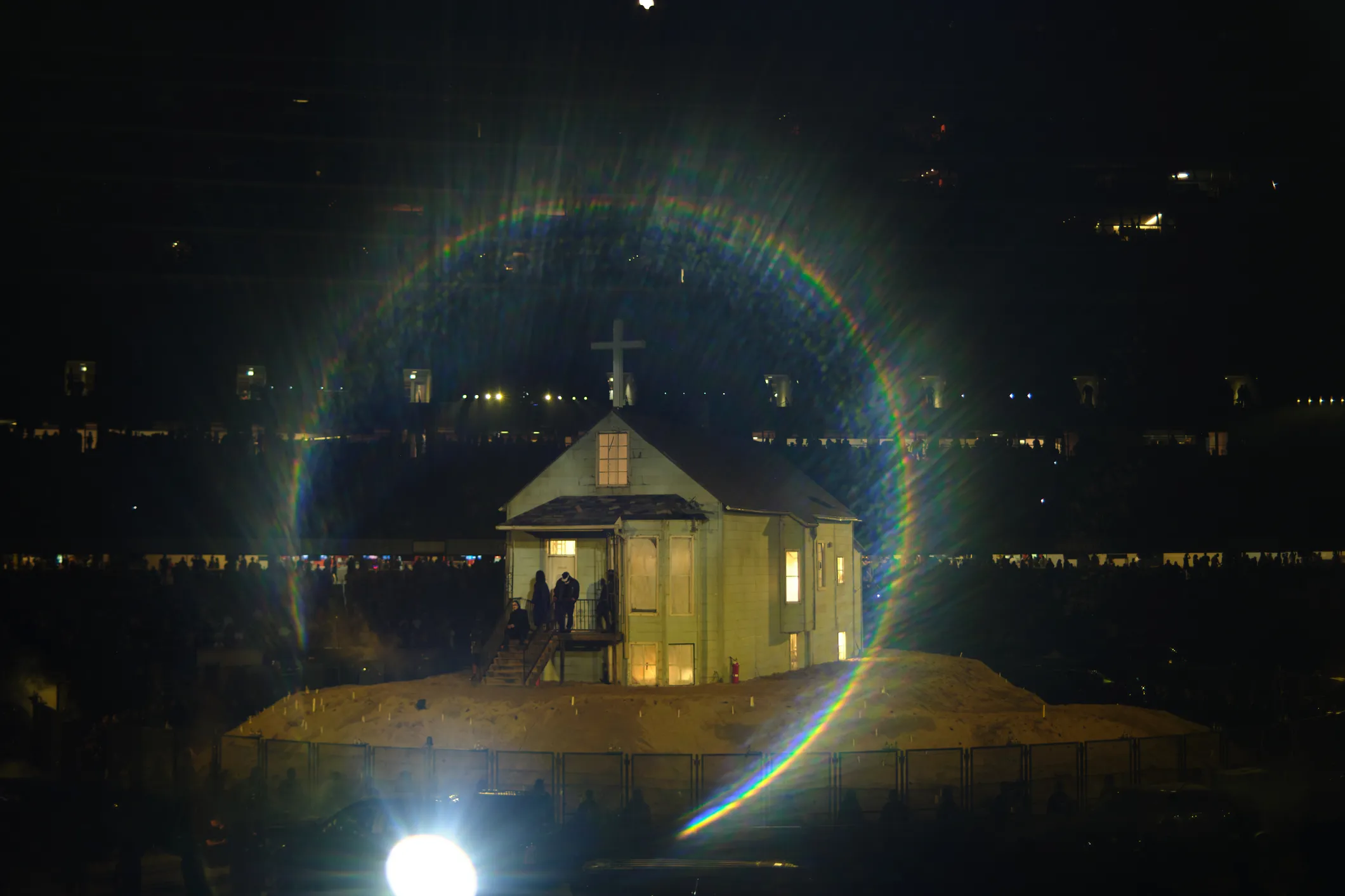 After over a year of anticipation and countless delays, Kanye West finally released his 10th studio album “Donda” on Sunday, Aug. 29.

The album, initially slated for release on July 24, 2020, is named after West’s late mother Donda West and features 27 songs with a runtime of nearly an hour and 50 minutes. “Donda” comes off the heels of the album’s third official listening party that took place at Soldier Field in Chicago on Aug. 26.

Although the public had known of “Donda” since July 2020, few had actually heard any of the album until a listening party at Mercedes-Benz Stadium in Atlanta on July 22, 2021 that was live streamed for free on Apple Music. Following this event, West took up residence in the stadium to continue working on the album. A second listening party occurred in the same stadium on Aug. 5 featuring greater theatrics, including backup dancers and West floating above the crowd, along with a longer, more complete version of the album. “Donda” was announced for release after this event, which turned out to be another false start.

The third listening party came with the typical Kanye West antics and controversy. West debuted yet another iteration of the album from a replica of his childhood home. He was joined on this “stage” by multiple guests, including recently-cancelled rapper DaBaby and alleged abuser Marilyn Manson. This move led to immediate backlash from fans and critics, who questioned why West would bring out such controversial artists at an event for an album that honors his mother.

Later in the show, West lit himself on fire and fell to his knees outside of the house, where he was extinguished. Kim Kardashian, who recently filed for a divorce from West, then walked onto the field in a wedding dress and held hands with West to close the show.

Soon after “Donda” dropped on streaming platforms rather unexpectedly three days later, West alleged on Instagram that his label, Universal, put out the album without his approval. Along with the 23 original songs, the album also came with four alternate versions of songs labeled “pt 2,” one of which features vocals from Manson and DaBaby and was originally unplayable on streaming platforms. It was later alleged that DaBaby’s manager would not clear the song, but West insisted on the track making the album because DaBaby was “the only person who said he would vote for [West],” referring to the rapper’s failed presidential campaign.

The actual album, complete with plain black cover art, deals heavily with themes of faith, family and West’s relationship with his mother. It is notably edited to cut out any cursing, following the trend of West’s previous album “Jesus is King” and making good on a 2019 promise he made to no longer make secular music. “Donda” is filled with features as well, including pop culture mainstays like Jay-Z and The Weeknd, along with smaller artists like Vory and Fivio Foreign. There are also a smattering of samples on the album, from “Believe What I Say’s” sampling of a Ms. Lauryn Hill song to “Remote Control’s” sampling of an animated Christian film character-turned-meme.

Some songs on the album come with their own histories. A different version of “Tell The Vision” appeared on late rapper Pop Smoke’s album “Faith” earlier this year under the same name, with different production and a feature from West. An early iteration of “Hurricane” was originally teased by West in Sept. 2018 with the announcement of “Yandhi,” another album with a troubled past that is yet to see official release. “Believe What I Say” was also teased in a tweet from West in Sept. 2020.

Some students shared their initial thoughts and opinions on “Donda.”

What are the best songs on “Donda”?

Macie Cress, senior strategic communication major: I really like “Jesus Lord.” That was the first song my friends and I listened to, and we were all really vibing to it.

Joe Vainisi, senior computer science major: My favorite song is probably “Jesus Lord.” It’s not common for Kanye to tell an emotional story, and I think he did it very well. I also like “Jail” in terms of how it sounds.

Emma Cushman, senior chemistry major: I really like “Hurricane.” I really like The Weeknd, and it’s the track people have known about for a while, so hearing it in context was amazing. I also like “Jail” and “Come to Life;” the piano is so gorgeous.

What are the worst songs?

JV: The worst song in my opinion is “Off The Grid;” it’s just the same thing over and over, and I didn’t like the features on that song. Also “Ok Ok”, not a fan of that one either.

EC: “Donda Chant.” I understand its artistic place in the album, but I will never listen to that song again.

Do you think the “pt 2” alternate versions are necessary?

MC: Honestly, no. They’re basically the exact same song with just a different person featured on it or a different lyric change or something, so I think it’s a little repetitive.

JV: They don’t really add much to the album. It’s like, I already listened to this whole thing and I liked it, it was a decent album. But now I have to listen to the songs again, just slightly different. I just think all the originals are better.

EC:  I think the part two’s are simply unnecessary, and I’m really disappointed that “Jail pt 2” is on there with DaBaby and Marilyn Manson.

Has the build up to the album, the antics and the controversy affected your opinion of “Donda”? If so, in a positive or negative way?

MC: If anything, it just kind of made me more annoyed with Kanye. I’m like, literally drop it because a lot of people had already known the tracklist and a lot of the songs before it even came out, so it kind of lost its hype a little bit. Sometimes I feel like he just wants to be controversial to gain some type of attention. Any attention to him is good attention.

JV: I’ve been a Kanye fan for so long, so this was to be expected. The fact that the album dropped at all was cool and exciting because at a certain point after the third listening party I just straight up thought it was never going to come out. So all the hype and anticipation probably added to my enjoyment of the album. It’s part of his whole personality, and I can kind of get behind that.

EC: It 100% negatively affected the way I think. I think it’s really unprofessional to keep putting off release dates and disappointing your fans like that. I also think him not wanting to release it because DaBaby said he would vote for him in an election is absolutely stupid.

Do you enjoy the religious route Kanye West has been taking with his last few albums?

MC: I don’t see a problem with it. I didn’t like [previous album] “Jesus is King,” but I don’t think mentioning that type of stuff is bad. To make everything about it, that’s always going to ruffle some people’s feathers.

JV: I’m not too thrilled about it because it seems like he’s limiting himself to making certain kinds of music, and I think he’s even done it better in the past than he’s doing it now. But at the same time, he’s a growing man, he has kids now, so I can understand why he’s making the change. But I do think his music can benefit from being a little adult-themed, like it is on something like [2010 album] “My Beautiful Dark Twisted Fantasy.”

EC: I don’t mind the route he’s going, but that’s just because rap music that exploits women doesn’t really make me feel comfortable. Especially when people listen to it a lot, it makes people feel desensitized to the subject. So I like the direction.

Where would you place “Donda” in your ranking of Kanye’s discography?

MC: I’d probably place it in the middle to bottom tier because I really like old Kanye a lot, and his stuff from like 2010. I don’t think it’s top three or top four or anything like that.

JV: So a lot of people might give me hate for this, but I’m not really a fan of Kanye’s first three albums. I would still put those above “Jesus is King,” and then I would probably put this album right in front of those, so right around the middle. I don’t think it’s terrible, but he certainly has better albums.

EC:  I do like this album better than “Jesus is King” for sure. So, like middle. It’s not the best thing ever, but it’s not the worst.

What are your overall thoughts on “Donda,” and what would you rate it out of 10?

MC: I would definitely say that it was a little bit too hyped up for what it was. Looking back, I thought it was going to be amazing, like everyone was talking about it was gonna be the greatest Kanye album of all time. But all the features and stuff were really good, so if I were to give it a rating out of 10, I’d probably give it like a 7.2.

JV: Overall, I very much enjoy it. It seems like he’s sticking to this God theme, but at least he’s taking it a bit further than he went on “Jesus is King.” And he tried new things on this album too, which I like. There’s some really really good bangers like “Hurricane” and “Jail.” I honestly wish “No Child Left Behind” was the ending because I think that would be a really good outro to the album. There are some songs that I really don’t like, and he made us wait so I’m going to dock some points there, but it does deliver some real masterpieces, and I think that deserves recognition. I’ll give it a 7 out of 10.

EC: Honestly, I think I’d like the album ten times better if the DaBaby and Marilyn Manson song wasn’t on it. It just shows Kanye’s character. Out of 10, I’d probably say a 6.5.