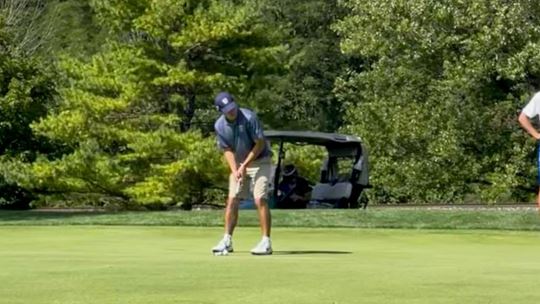 Daniel Tanaka prepares to swing during his record breaking performance at the Earl Yestingsmeier Invitational on Sept.18. Photo courtesy of Butler Athletics.

In May of 2021, Bill Mattingly announced he would not be returning to Butler for what would have been his 15th year as head coach. Mattingly instead retired, leaving an empty position for Butler men’s golf team. Luckily for the ‘Dawgs — they did not have to look far for the man to fill Mattingly’s shoes.

Colby Huffman, who spent all of last year as a volunteer assistant for the Bulldogs was pinned as the next head coach.

“Getting the news was very humbling,” Huffman said. “This job allows me to use some of my past experiences and things I have learned along the way.”

Huffman has coached across a variety of ranks in golf. In his only year as a volunteer assistant, he helped lead senior Michael Cascino to a Big East Championship.

“Coach [Huffman] has been very different from a lot of coaches that I have had in my life,” redshirt freshman Daniel Tanaka said. “He knows more about golf than anyone I have ever met, which is awesome to have as a resource.”

Graduate student, Nick Williams, who is from the area of Indianapolis sees a difference in Huffman’s coaching style.

“The main difference I have seen is the practice structure and the way Coach Hoffman runs the team,” Williams said. “Our practices used to be pretty hands off with Coach Mattingly and we were free to work on what we wanted the majority of the time, but with Coach Huffman, he sets drills and different skill work that we have to complete each day during practice.”

This Bulldogs team has a mixed bag of lower-and-upper classmen. Damon Dickey, Weston Guili and Henry Quinn will come in as true first-years. Going with the first-years are the Tanaka brothers, Daniel and Michael. Daniel is a redshirt freshman, while Michael is a redshirt sophomore. The golf team has only one true sophomore in Jack Wilcox.

For the upperclassmen, Butler has Daivic Akala, the only junior on the team. For the senior class, there are two this season — Raymond Sullivan, and Stehen Kocerha. The Bulldogs also have Nick Williams, who returns as a graduate student after regaining a year of eligibility that was rewarded by the NCAA for players who lost their season to the  COVID-19 pandemic.

“The biggest thing that I have noticed so far is that I feel more accountable for the way I carry myself at practice, workouts and in tournaments,” Williams said. “With the makeup of our team being heavily underclassmen, I want to make sure to show them a good example and be there to help them with anything, on or off the course.”

The Bulldogs will participate in five invitationals in the fall. Then they will cap off their season in the spring of 2022 when the Bulldogs travel to South Carolina for the Big East Championships — where a title has continually eluded the team’s grasp.

“In the past few years, we have come very close to winning the Big East Conference but have never been able to quite pull it off,” Williams said. “Obviously the peak goal would be to win nationals, but we have to win the conference tournament to get there, so I think winning the Big East at Callawassie would be a good start.”

The season began for the Bulldogs on Sept. 5 at the “Hoosier Collegiate Invitational” in Bloomington. The team finished 13th out of the 15 teams and were led by Daniel Tanaka and Weston Guili, who shot 23 under par.

Butler finished their second invitational in Muncie on Sept. 19, and it came with some history for Daniel Tanaka. The redshirt freshman had the best 18-holes in Butler history, when he shot six-under 64 to break the previous record held by Andrew Wegneg in 2011.

“I did not know that I had broken the record until after the round,” Tanaka said. “I was told by one of our coaches after the round and thought it was pretty cool but I had no idea I was even close while I was playing.”

For the team, Butler finished in 11th place out of the 13 teams that participated. However, the  Bulldogs improved during the two-day tournament.  On day one, Butler combined for a total score of 303, the next day they shot a 287.

Even after a slow start through the first two tournaments, that has not shook the confidence of the team.

“This team has a lot of potential to be the best in the conference,” Tanaka said. “Once everyone starts getting settled in and back in the tournament-feel, I believe we are going to be a tough team to beat.”

For Coach Huffman, he has bigger plans for the Butler men’s golf program.