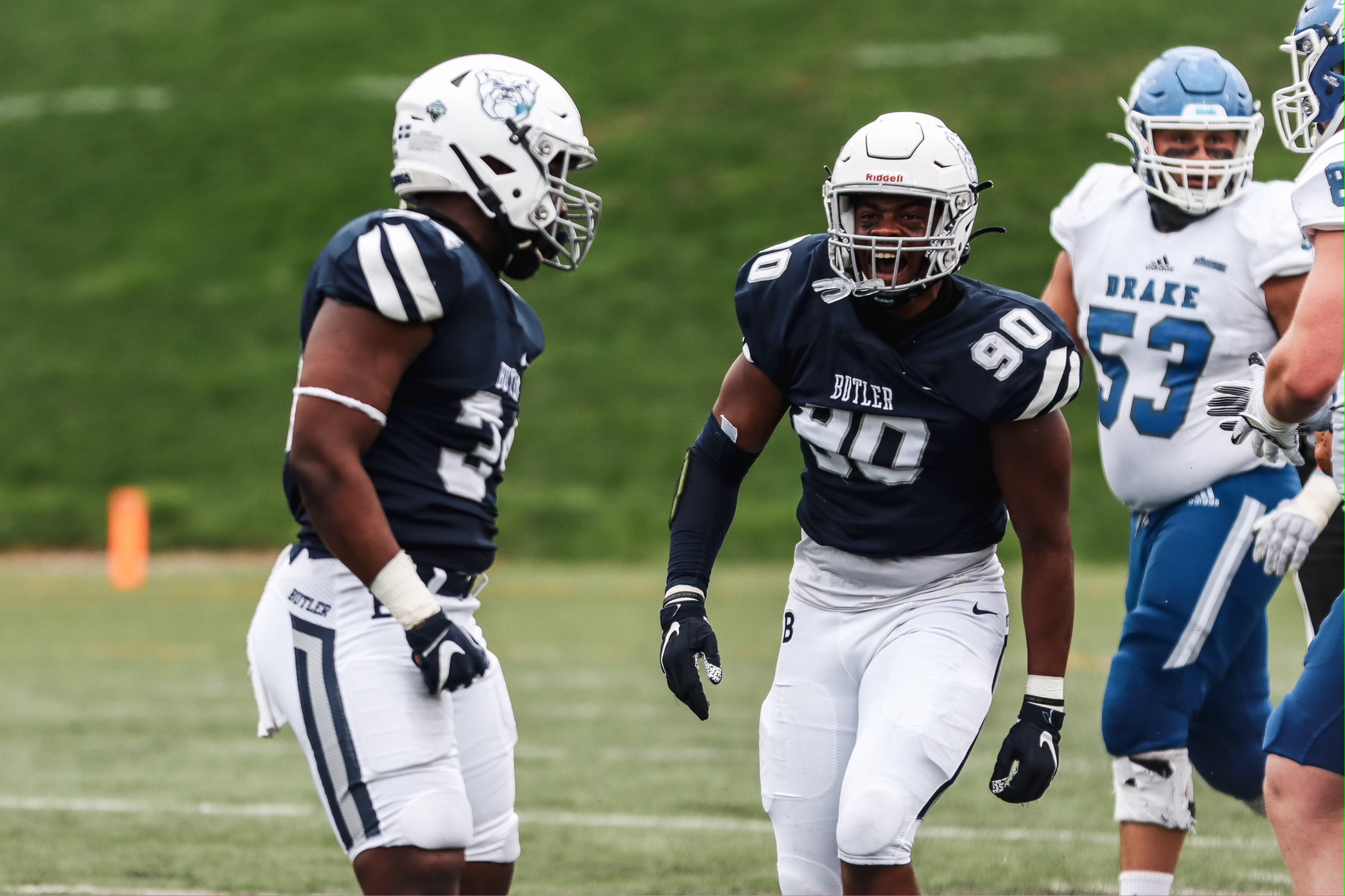 Eloi Bigirimana (left) and Jordan Caselberry (right) after a play during game against the Drake University Bulldogs last spring. Photo by Chandler Hart.

After an unusual spring season due to COVID-19, the Butler Football team is ready to gear up for a full 11-game Pioneer Football League season.

While last season was an abnormality with a younger team playing only six games in the spring, they have worked hard this summer to come together as a whole and improve on all aspects of the game.

Luckily for the Bulldogs they are not alone with the quick turnaround from last season. Other teams in the PFL are going through the same process. But many Butler players including, redshirt junior wide receiver Johnny O’Shea, do not see this quick turnaround as negative.

“I think it’s going to push us even harder because of the season we did have and that is not who we are,” O’Shea said. “If anything, it will affect us positively.”

Coming off of a winless season, head coach Jeff Voris felt that last season was a good learning experience and is pleased with the development of the team.

“It was a great learning opportunity for a lot of guys,” Voris said. “The amount of experience that [younger] players got and the leadership opportunities the older players got that are coming back put us in a good position.”

Although the ball was in the hands of a younger team last season, many of the players have returned and continued to mature over the summer and are prepared for the fall.

“You are going to hear a lot of names we’ve heard before that have put in a great summer and have really developed. I like where this team is and where we are headed,” Vorris said.

However, the Bulldogs weren’t able to show much of their team’s development during their 49-7 blowout loss to the Illinois State Redbirds on Sept. 5.

This loss emphasizes the goal that Voris has set out for the team to improve on.

On the offensive side of the ball, junior captain Bret Bushka will be taking over the reins as quarterback with Sam Brown missing the 2021 season with an injury. Last season, Bushka played in five games and had an immense amount of playtime against Drake, on April 10, where he completed six of his nine pass attempts for 95 yards and a touchdown.

Bushka will be joined on offense by O’Shea who was selected 2020-21 All-PFL Third Team and a team captain. The redshirt junior will be a huge asset on the outside for the Bulldogs. He had a career game against Morehead State this past spring, catching eight passes for 108 yards.

“We have a great close-knit group of guys who want to be remembered for this season,” O’Shea said. “Last season we were really close in a lot of games and had a lot of mistakes but being able to clean them up and become even tighter as a group is really going to help.”

Redshirt freshman receiver Yogi Flager will be a huge weapon to the offense after having an incredible first season with the Bulldogs — in which he led the team with 387 yards. Flager earned a spot on the 2020-21 All-PFL First Team, the youngest on the list, and was voted Butler’s Newcomer of the year by his teammates. Flager will be key offensively this season after having an exceptional rookie year.

Another name to be looking out for this season is senior running back Kavon Samuels. The 2020-21 All-PFL Team and Butler’s Most Valuable Offensive Player started in all six games last season and led the Bulldogs with 105 rushing attempts and 395 yards. Samuels had a career high game during the spring 2021 season opener where he rushed for 117 yards. He was responsible for three touchdowns last season — one rushing and two receiving.

On the defensive side of the ball, redshirt junior Jordan Caselberry returns as a key attribute and a team captain. After being named Most Valuable Defensive Lineman by his teammates for the 2020-21 season and being a 2020-21 All-PFL Third Team selection, he is ready to make an immediate impact on defense.

“Making those big plays when the opportunity arises is key,” Caselberry said. “The tiny mistakes can kill us so making sure we have everything perfect and cleaning up those mistakes.”

Jordan recorded 17 tackles and 1.5 sacks last season and had a season-high seven tackles in the season opener against Valparaiso on March 13.

Redshirt senior cornerback Devin Aguilar will be another star on defense this season to look out for. The two-time captain and 2020-21 All-PFL Selection started at cornerback in all games last season and led the defense with 33 tackles, adding an interception against Morehead State.

The Bulldogs will be playing their first full PFL season since 2019 and are excited for what is to come.

The first home game is set for Saturday, September 11 at 6 p.m. against the DePauw Tigers at the Sellick Bowl.