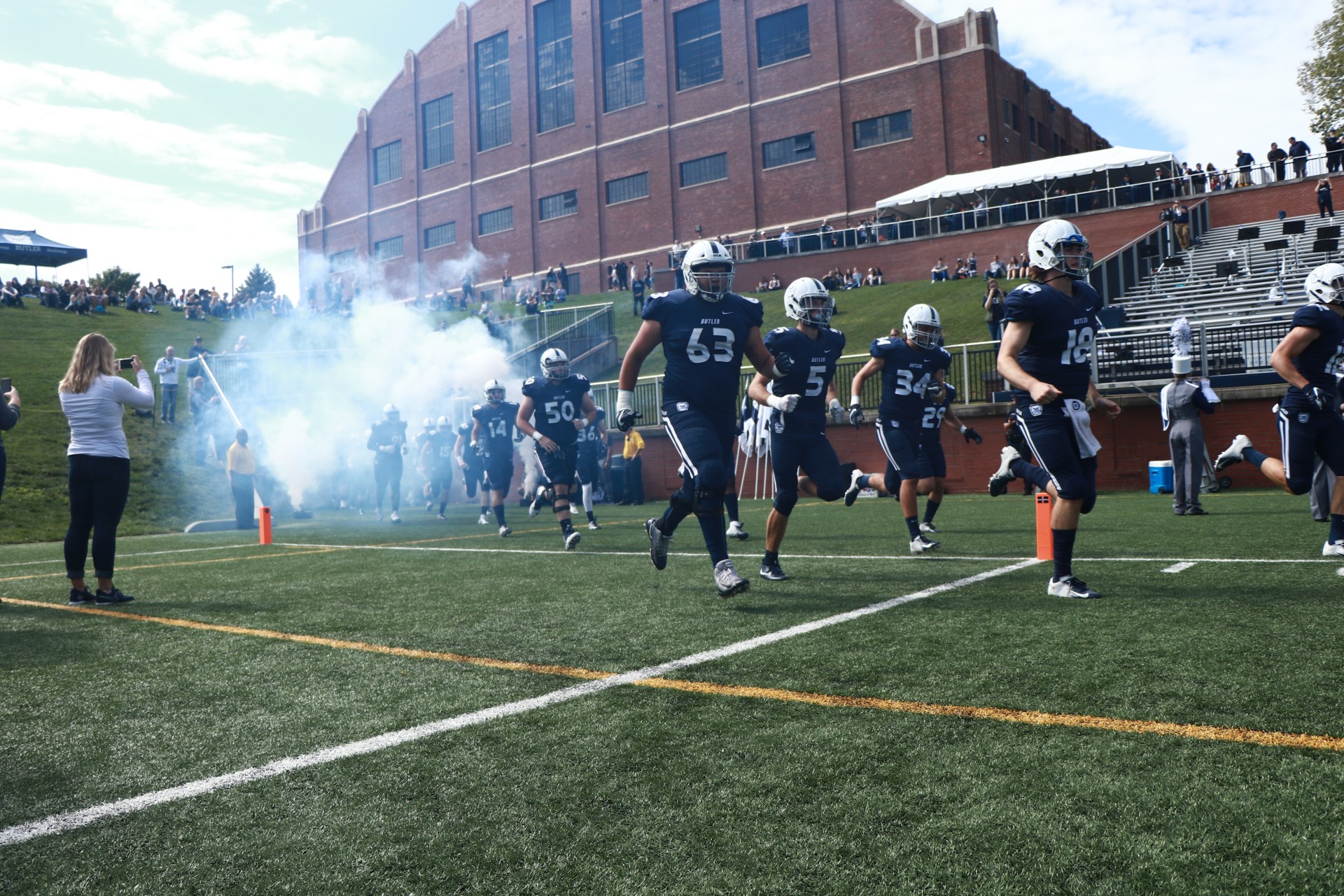 The Butler football team takes the field before a game during the 2019 season. Collegian file photo.

The Butler football team was victorious last night in their 49-24 win against the DePauw Tigers during their homecoming weekend and improved to 1-1. This is the team’s first win since November 2019.

On the opening drive, the Bulldogs set the tone for the game as quarterback Bret Bushka completed a 49-yard pass to wide receiver Yogi Flager that landed him in DePauw territory.

Five plays later, quarterback Nick Orlando rushed it over the goal line for a 1-yard touchdown. Later in the first, Buskha connected with Flager for a 6-yard pass for six, moving the score 14-0.

The Tigers turned things around with a turnover and put themselves in position to score. Running back Drew Moore scored a 4-yard touchdown rush, cutting the lead to 14-7.

The next drive, Butler used nine plays to travel 75 yards to set up Orlando for his second touchdown of the day from 2-yards out, moving the score to 21-7.

With under a minute remaining in the half, Bushka found Flager for an 11-yard touchdown pass on an eight play, 64 yard drive. Giving the Bulldogs a 28-7 lead going into halftime.

The second half of the game started off strong for the Dawgs with cornerback Devin Aguilar getting the ball right back to the Bulldogs with his first pick of the season.

Butler took advantage of the turnover with running back Kavon Samules running the ball all the way to the goal line to set up a 2-yard touchdown.

DePauw responded with a five play, 75 yard drive resulting in a 7-yard touchdown run by quarterback Chase Andries, moving the score to 35-14.

The Tigers forced the Bulldogs to punt for the first time in the next series, but Aguilar came in clutch with his second interception of the game. Five plays later, running back AJ Dienhart made it 42-14 with a 11-yard rushing touchdown to close off the third quarter.

Early in the fourth, receiver Jaylon Smith’s 33-yard catch from Andries set up a 26-yard touchdown run for Moore, moving the score to 42-21.

Butler scored its final points of the night with a 1-yard run by Orlando, giving him a hat trick on the night.

With the game out of reach for DePauw, they settled for a 27-yard field goal by Joe Sullivan with under five minutes left, bringing the game to a final score of 49-24 and giving the Bulldogs the victory.

Butler will look to grab another win next week as they hit the road to take on the Taylor Trojans on Sept. 18 at 7 p.m.