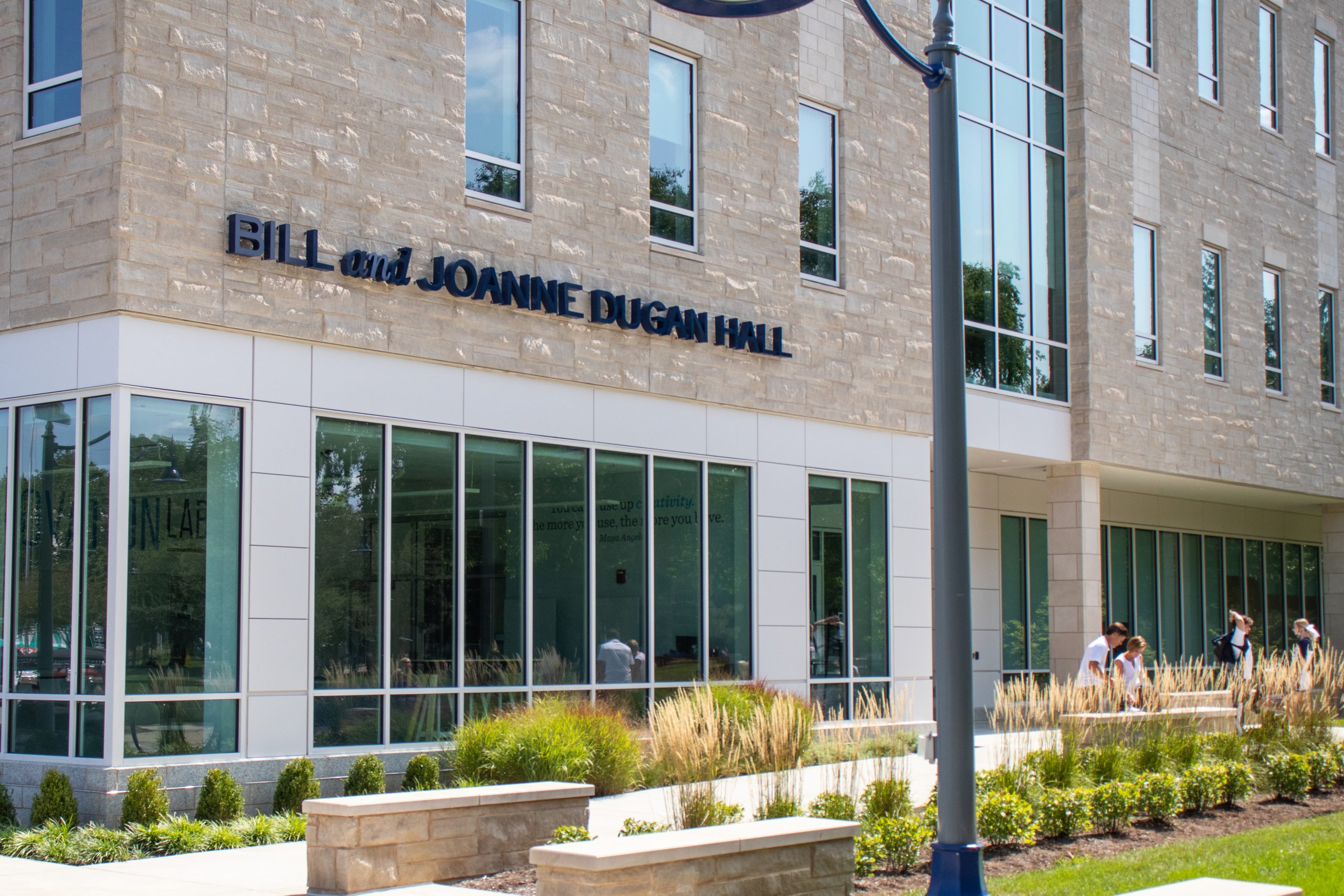 The sign containing the new name for the Business building hangs outside. The new name, Bill and Joanne Dugan Hall, was officially implemented during a naming ceremony on Sept. 10.  Photo by Ben Caylor.

Students, faculty, staff and community members gathered in the Business Building on Friday, Sept. 10 for a ceremony to celebrate its official naming as Bill and Joanne Dugan Hall. Bill Dugan is a class of 1951 Butler graduate.

The building was named after Dugan as a result of his $7 million multi-year gift commitment in support of one of Butler’s newest facilities. The modern, 110,000-square-foot building is home to the Andre B. Lacy School of Business, Butler Beyond Transformation Lab and the Office of Career and Professional Success.

Caldwell explained that donations like Dugan’s allowed Butler to build the new facility. The majority of classes can now be conducted in the same building where faculty have their offices, and there is enough room to hold major events such as the Real Business Experience Marketplace. Caldwell said he is grateful for Dugan’s support of Butler and their mission.

“It’s a real affirmation, or kind of endorsement, to what we do here, for somebody to come along after so many years of being an alum…not only supporting, but supporting in a very, very significant way,” Caldwell said.

Dugan is the president and owner of Sign Crafters Inc., a company based in Evansville, Indiana, that designs, manufactures and installs business signs. Dugan said he credits Butler for this success. His schooling and career came full circle during President James Danko’s speech at the ceremony, in which he explained that Dugan’s company installed the new sign on the front of the building.

During his time at Butler, Dugan was a Sigma Nu. He worked concessions at Hinkle Fieldhouse to help pay for his Butler education and earned his undergraduate degree in accounting. Dugan met his late wife, Joanne, while they were both students at Butler.

“I wouldn’t have had the future I have without Butler and with[out] the friendships I made at Butler,” Dugan said.

Along with the building, Dugan himself will also have the opportunity to make an impact. Dugan is taking on the role of senior advisor for the Lacy School of Business and will have a designated office where students can drop in and talk with him.

Emma Ryan, a senior finance and marketing double major, spoke at the ceremony on behalf of her fellow Lacy School of Business students. Ryan said she hopes students take advantage of this resource.

“I think he just brings such a wealth of experience and knowledge…I hope he becomes someone that people can turn to and just have a very honest conversation with,” Ryan said.

Caldwell said he hopes Dugan’s namesake on the building will inspire students giving them “a great living example” of a Butler graduate and entrepreneur.

“It’s like a dream,” Dugan said. “It’s unbelievable. It’s surreal, it really is.”