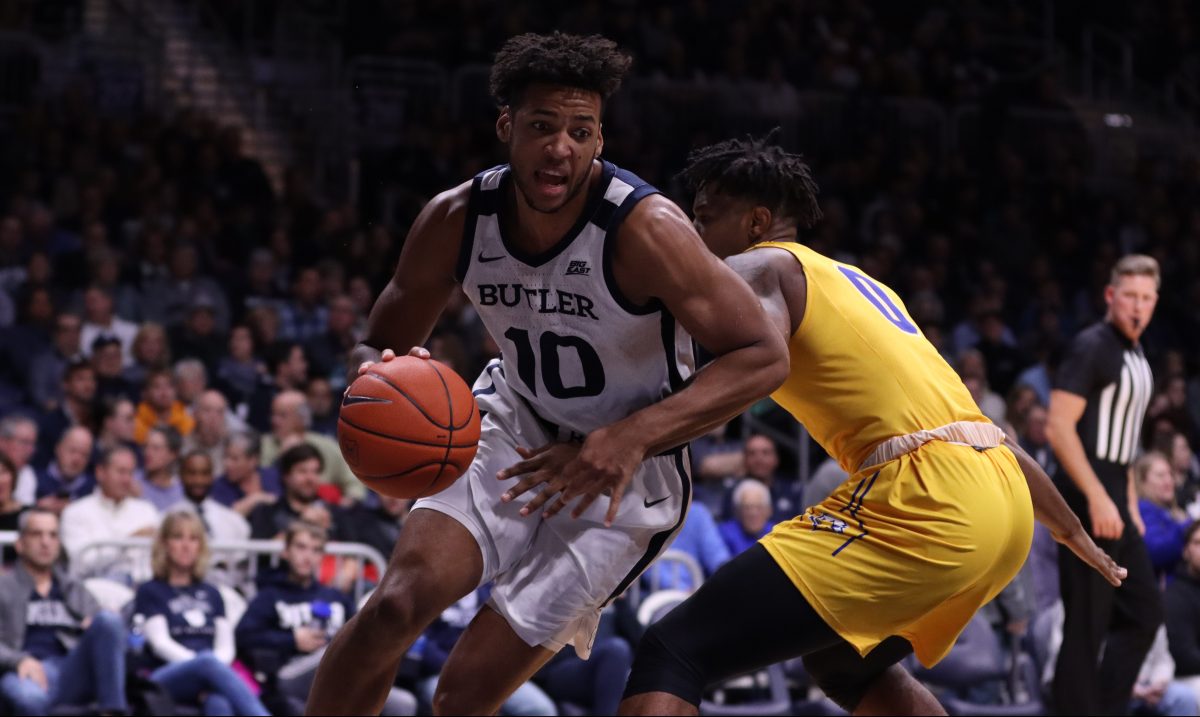 Bryce Nze drives towards the rim during a Butler basketball game last season. Nze is one of the many Butler senior athletes choosing to utilize their extra year of NCAA eligibility. Collegian file photo.

Last March, the NCAA voted in favor of granting spring student athletes an additional year of eligibility. In the months after, fall, winter and spring athletes that played less than 50 percent of their season, were given the same privilege. Butler’s senior student athletes were faced with a decision to either play another year or move on — and many decided to take advantage of their extra year.

Graduate student Julia Leonard and redshirt senior Amanda Kowalski both decided to stay in school to play another year with the women’s soccer team. The pair were a part of last year’s team which reached the Big East final in an abbreviated spring season.

Leonard remembers immediately sitting down with the coaching staff when the talk of another year of eligibility began.

“I was just extremely blessed to have the opportunity to come back again,” she said. “The fact that they wanted me back with this program for an extra year just really made me super happy and super excited.”

In addition, Leonard had conversations with family, teammates and faculty at Butler before coming to her decision.

“Then, just talking with my parents, too, because I’m super close with them, and I have an older brother who plays professional soccer so I was getting his input, you know, what are the positives and negatives,” Leonard said.

Conveniently, Leonard was already set to stay on campus this year as she looked to begin graduate school to become a physician’s assistant. She remembers having initial doubts about attempting to play and also managing the academic side. Those hesitations were soon eased as the coaching staff reassured Leonard that her academic goals would be supported.

Kowalski also had similar conversations, citing her academic future as one of the biggest obstacles.

“I think that one of the main cons of figuring out a COVID year was trying to figure out the best route for you,” Kowalski said. “I compared it to freshman year, figuring out what major you want to do. It’s just you don’t necessarily know what’s the best route and it’s very hard to have to make that decision.”

In the end, she wasn’t going to pass on having the opportunity to spend another year with her team.

Graduate student Bryce Nze has been a key piece to the men’s basketball team over the past few seasons and is set to remain so for the upcoming season.

Unlike Leonard and Kowlaski, Nze wasn’t afforded the time to think about his decision before the season. As a result, Nze refrained from thinking about his future too much. Instead he remained focused on the season.

Nze’s teammates and fellow seniors Jair Bolden, Aaron Thompson and Christian David all decided to exercise their extra year of eligibility. Nze acknowledged that his teammates were going through a similar situation but made certain his decision was to be the one that meant the best for his future.

“When going through a decision like that, I mean, that’s my career,” Nze said. “I mean it took a lot, I just thought a lot and weighed the options, on what to do, and for the future.”

Following an injury-filled 2020-21 season that showed signs of potential, Nze felt there was still something left to be done.

“I think we have a little bit of unfinished business, with everyone coming back,” Nze said. “Hopefully at a healthy level, I think we definitely can make some more noise. Even with the injured players we had last year we were still in a lot of games.”

Joel Harvey, graduate student and defender for the men’s soccer team, wants to help a young and talented roster reach their goals. Harvey jumped at the chance given to him as he could now start on the road to earning a master’s in business administration while continuing to play.

“I was excited for sure,” Harvey said. “The opportunity was just right in front of me, so for me, it was kind of a no brainer.”

For Harvey, it was the relationships that drew him back to Butler. Harvey’s connection with his teammates, classmates and the ability to stay close to family who live only a couple hours away made leaving an option that would’ve been tough to take.

“I think it’s going to not only provide me opportunities to still continue to play college athletics, but it’s going to give me an opportunity to further my career, further my development [and] network,” Harvey said. “Hopefully [I’ll] come out of college going into the next phase of my life on a positive note.”

Harvey, Nze, Kowalski and Leonard are joined by a number of Butler seniors who are eager to compete in a “Last Dance” of sorts in their respective sports.