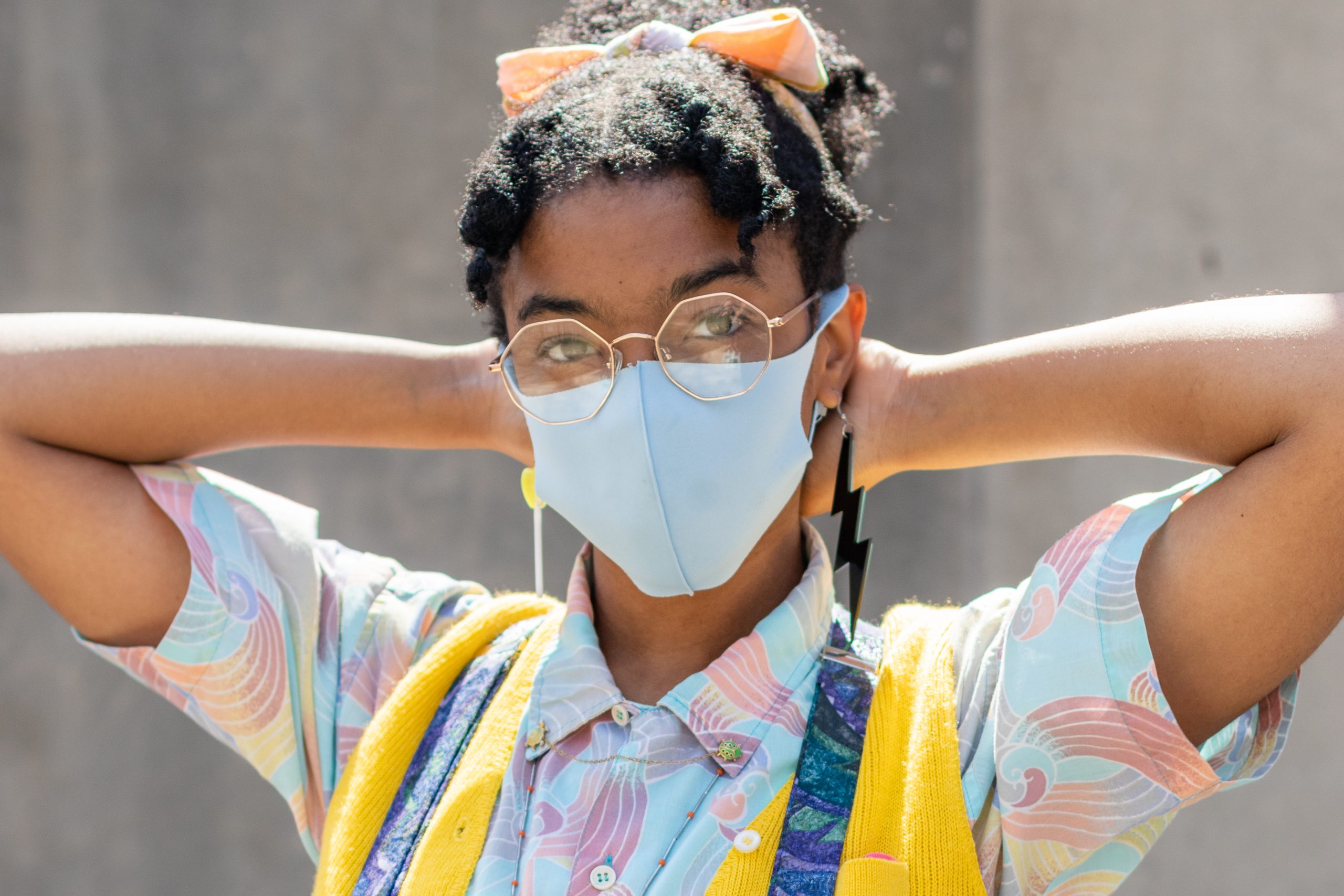 Enali Rogers talks about her colorful style as well as the inspiration behind her looks. Photo by Lauren Hough.

First-year physics major Enali Rogers is known far and wide on Butler’s campus for her infamous frog hat. Rogers’ style revolves around pastels and other bright color palettes. She attributes her style to her father, who buys and sells vintage clothing, and her friend, Lenice Bailey.

The Butler Collegian: How would you describe your style?

Enali Rogers: I’d say colorful but comfortable. I stick to [those] same two things and I just add color to it.

TBC: What kind of things influence your style?

TBC: Have any friends or family influenced your style?

ER: My dad buys and sells vintage… so the reason why I was able to come across all this cool clothing, because I spend every day, all day at the thrift store. Thrifting is really fun but takes a lot of patience to find some good pieces and so that’s probably part of it. My grandma has also influenced my style because she too has her own style and still rocks what she wants. My mom has also helped a lot with my self confidence in supporting me in what I wear too. I think it’s [also] just the friends around me, there aren’t very many but I think Lenice is probably the main one. It’s nice to have another person that actually expresses themselves through their clothing. Just walking around campus with her is really cool to just have our two different styles side by side.

TBC: When did you start to develop the style you have right now?

ER: I guess it would have been in middle school, that would have been the basis when I started wearing button ups, sweaters and bowties every day. Then it just slowly formed into finding more colorful clothes and adding onto my wardrobe.

TBC: What’s one of your staple pieces?

ER: I guess my staple piece would be this necklace, it’s not really much. But it’s a little pocket, it used to have a bronze turtle in it but I took it out because it has a hole in it and I didn’t want it to fall out. But now there’s a small chicken in here, his name is Steve.

TBC: I know if you mention the girl that wears the froggie hat, everyone I’ve talked to has stated that they love the hat.

TBC: What advice do you have for people who are struggling to find their own style or the confidence to wear what they want?

ER: I saw this quote online a long time ago and it really helps me when I’m like, ‘hm should I wear this?’ It was like, ‘the world is your stage and clothes are just costumes, so dress like the character you want to be.’ I think about that everyday and I’m like, ‘who cares what other people see if they see me?’ I mean if they’re going to stare at me, they might as well have something to look at.

TBC: Are there any social media accounts that you follow specifically for style inspiration?

ER: Not really, I guess one celebrity [whose style] that I really enjoy is Janelle Monáe but that’s about it.

TBC: How do you stay true to your style in an environment like Butler where your style tends to stand out?

ER: If I were to dress in stuff that wasn’t me, I wouldn’t feel like me. I’ve tried, like even when I don’t feel like getting dressed and I put on just regular clothes [but] I feel like I’m not me. I guess it’s just this feeling that I’m not being true to myself if I’m trying to stifle what I enjoy, just because of looks or what other people think. I know I get a lot of looks on campus whether those are good or bad, I will never know. But I just hope they’re all good.