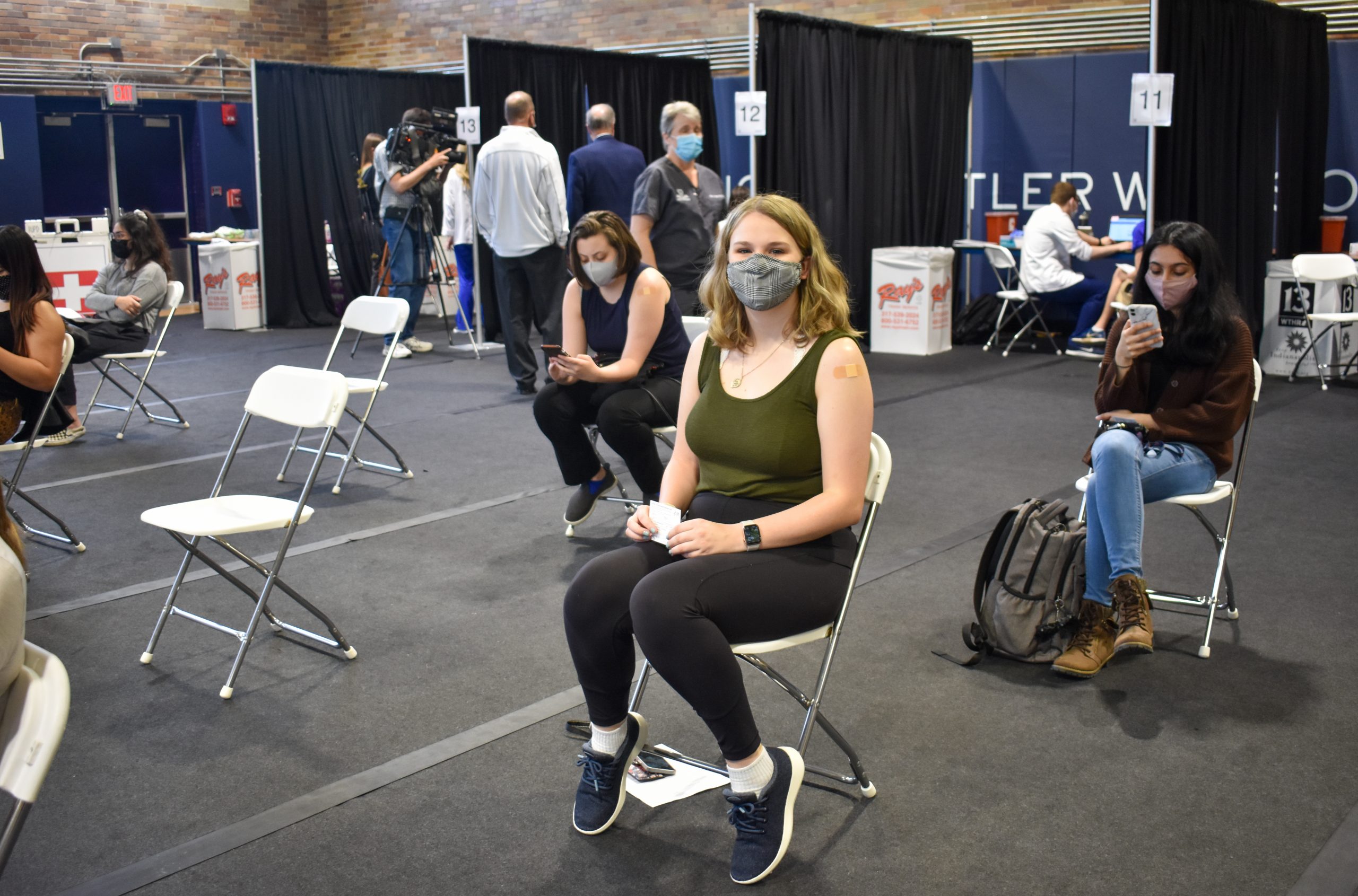 Last Wednesday, Butler opened the doors of its on-campus vaccine clinic in the Efroymson Family Gym at Hinkle Fieldhouse. Like many Butler students, I was beyond excited about this opportunity — after over a year of living in a COVID-19 world, it felt like a sign that things were truly starting to look up.

While vaccination roll-outs have been slowly happening for the past few months, college students across the country have been holding their breath as age restrictions have gradually been lowered. I think all of us were a bit unsure about whether Butler would actually be providing the vaccine, but after watching all of my family and friends be vaccinated for the past several weeks, all I wanted was to get my hands on some of that sweet RNA juice. When Butler sent out the interest survey, I promptly hopped on it. Afterwards, I waited very patiently — or rather, impatiently — for the Indiana Department of Health to send out the appointment email.

As soon as I got the long-awaited Outlook notification, I immediately signed up for a vaccination appointment as early as I could get it — well, as early as I knew I could realistically wake up for an appointment. I was confirmed for Wednesday morning at 10 a.m.

Now seems like a good time to mention one crucial fact about myself: I am terrified of shots.

From the outset, I had full faith in the vaccine, and I wasn’t worried about the risk of having a microchip implanted into my arm. However, I have a bad history with vaccinations — particularly, with passing out after I get them. Between my generalized anxiety disorder and a post-vaccine concussion after a bad fall a couple of years ago, I tend to freak out and cry before receiving vaccines, even though I am well aware that it is an irrational fear.

So, basically, I was the perfect candidate for writing this article.

When Wednesday morning came around, I rolled out of bed and literally ran from Fairview to Hinkle. I am not a morning person, and any of my friends could tell you that I am not known to be the most punctual for anything scheduled before noon.

I met up with one of our lovely Collegian photographers, Lauren, outside of Hinkle. Luckily, the clinic volunteers allowed her to go through the process with me. We had never met before that morning, and I felt ridiculous having someone observe me in what can only be described as the polar opposite of “my element.” Still, I appreciated both the moral support and the photos that came out of the experience. Even if I were to pass out and get another concussion, or spontaneously combust on the spot, hey, at least it would be forever preserved in the newspaper!

We entered the gym, and I was overwhelmed by the sight of the makeshift clinic. Booths constructed of jet-black fabric lined the walls, with pharmacy students in white coats manning each one. A grid of socially-distanced chairs stood in the center of the gym for students to sit in while they were monitored for adverse vaccine reactions.

I had a major case of sensory overload. I remember saying, somewhat sarcastically, to Lauren, “Wow, I really hate this.” However, all Shakespearean dramatics aside, I ended up having one of the most positive vaccine experiences of my life.

When I checked in, the student volunteer asked me a few questions about my demographic information and medical history. After that was all squared away, the student gave me a paper handout with information about the Pfizer vaccine and we moved to the next station. Another volunteer asked me if I have a history of adverse reactions to vaccines, to which I said — unsurprisingly to you all — that I did indeed. She told me that I was going to be taken to a “special” booth, which I found to be absolutely hilarious — my needle-averse self was already causing problems.

I was taken to a station for people who tended to have bad reactions to vaccines — this particular booth was situated in the far back corner of the gym, where things were a bit quieter, but was otherwise just a normal station like every other.

My vaccine was to be administered by a COPHS alumna, rather than a student. This was a relief to me; while I have nothing but respect for the pharmacy students who were volunteering to administer vaccines, I would be lying if I said that I wasn’t a bit nervous at the prospect of being vaccinated by a classmate, no matter what certification courses they had taken.

Both the alumna who administered my vaccine and the student who completed my documentation were wonderful. They were so kind and understanding — in fact, I was sent to be vaccinated by this particular alumna because she had a history of passing out, as well. Additionally, one of the PharmD supervisors repeatedly stopped by to ask me questions and make sure I was doing okay. I felt safe and knew I was in good hands.

Normally, I would have been crying by the time I sat down in the chair, but I was laughing and joking with the volunteers, which helped me to remain calm. I was so distracted by recounting my tales of former vaccine catastrophes that I was not even thinking about the fact that I was about to be stabbed. I even showed my vaccinator some pictures of my brother and sister-in law’s golden retriever puppy, which gave me a much-needed serotonin boost.

Then came the moment of truth: the shot itself. It pinched — as sharp objects tend to do when they pierce the skin — but it honestly was not that bad. In the resulting photos, you can see my face progress from a look of pure panic to one of relief, as it was over as quickly as it began.

The volunteers decided to keep me to be monitored for half an hour instead of the standard fifteen minutes, which was fine by me. I signed up for the vaccine symptom reporting database, as I wanted to do everything in my power to contribute to science. Then, I texted my family and friends to let them know I had survived and went on my merry way.

As far as post-vaccine symptoms go, mine were not too bad. My arm was sore for a couple of days, and I was tired — but honestly, I don’t know if the exhaustion was the result of the vaccine or the end-of-year schoolwork that makes every college student feel like a zombie for the entire month of April.

Being vaccinated at Butler’s clinic was, for me, genuinely a wonderful experience. If you are not vaccinated yet, I would highly recommend doing so — it’s always better to be safe than sorry! I think I can speak for everyone on the planet when I say that I am ready for the world to start to get back to normal, and getting vaccinated is the best way to try to ensure that it can. As for me, I am looking forward to getting my second dose next month. Plus, the 5G is an added bonus!