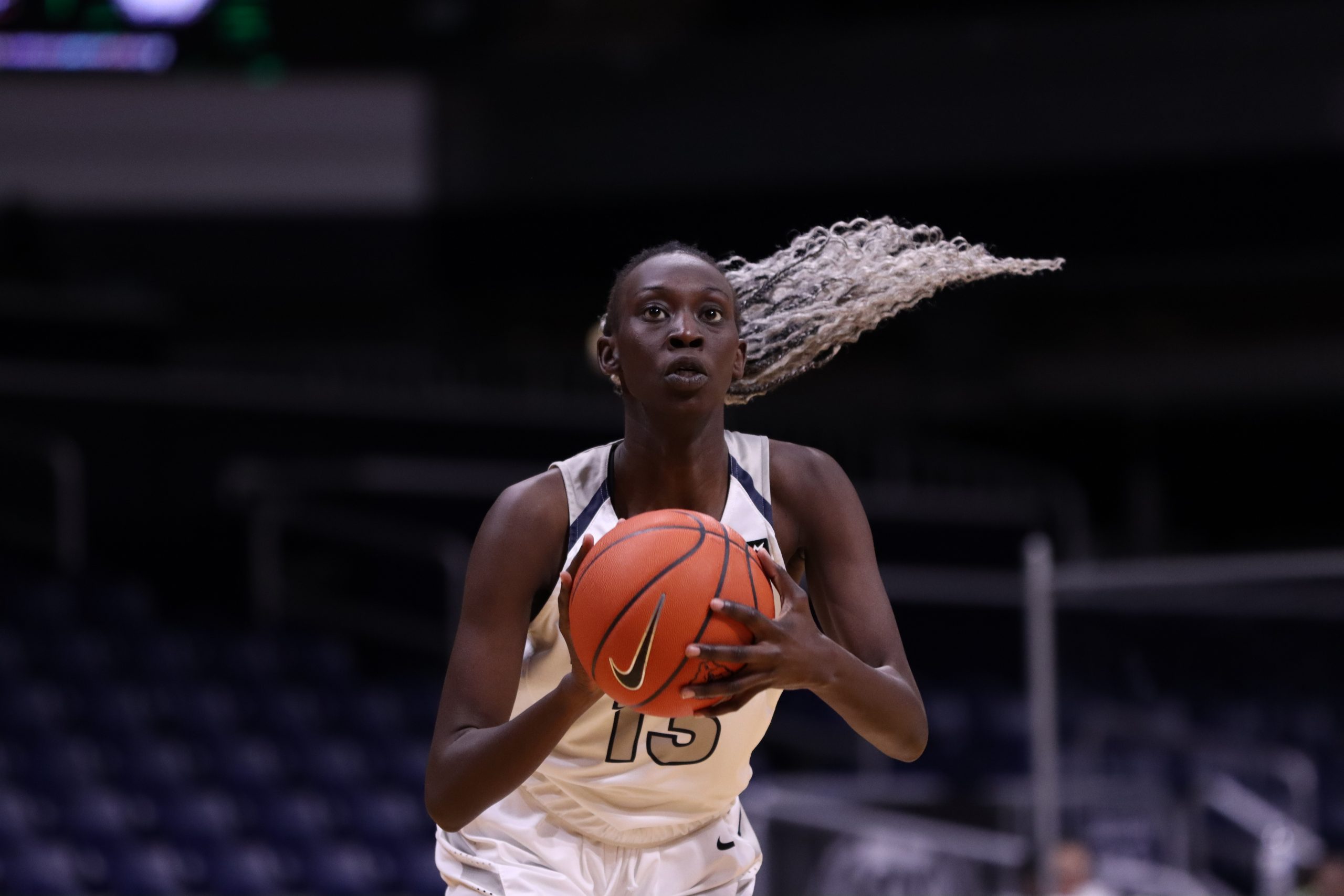 Nyamer Diew attempts a shot in a game earlier this season. Diew recorded 10 points and eight rebounds in the Bulldogs’ upset win over No. 25 DePaul on Monday. Photo by Chandler Hart.

Sitting on Nyamer Diew’s white Irvington desk is a framed portrait of her and her cousin. The first-year Butler women’s basketball forward is scrunched together with her cousin, both wearing ear-to-ear smiles. The picture was snapped on a Sunday, her favorite day; a day, in the Diew household dedicated to family.

Months after her cousin died, she had the picture framed. Now, multiple times every day — whenever she wakes up, returns from class or heads to practice — Diew glances at the framed portrait.

Praying has helped Nyamer Diew get to where she is now: a breakout first-year with gobs of potential. Prayer has also helped her battle through the rough times off the court — long before her cousin passed away.

“This is probably bad to say, but when life got hard, I wanted to quit,” Diew said. “But persevering through it all was probably my best thing.”

In a year that’s been rough on almost everyone, Diew has had it particularly rough. But it is the first year’s perseverance that makes her remarkable, even in the face of devastating loss.

Diew’s cousin was midway through barbecuing in a local park when he was murdered in a drive-by shooting.

It was early April; Diew, then a high school senior, was at home at Sioux City, Iowa when she heard the news.

“It hit me harder than my siblings,” Diew said. “Because we were the same age, and we were really close before, and it just happened out of the blue.”

In the first few weeks following his death, Diew disappeared into herself. Grief strangled her.

One day, unable to contain herself, Diew sat down with her mom and let her feelings pour out.

“It was just hard on me to lean on other people, open up,” Diew said.

In response, her mom, who migrated to the United States in 2000 as one of 4 million refugees fleeing the second Sudanese Civil War, offered her simple advice.

“She really taught me to lean back on God,” Diew said. “She’s always taught us to build a wall of being strong for yourself.”

While Diew lost her cousin in Omaha, Nebraska, she nearly lost her self-worth in Irvington Hall.

Early in her first year, Diew was socializing with people she called her friends when one of them directed a racist comment at her. While the comment shocked her initially, Diew didn’t grasp the gravity of the situation until after she returned to her dorm.

After sitting in her bed and digesting the situation, she called her mom.

“It was like, ‘Wow, that really happened,’” Diew said. “I didn’t know it was gonna come, I didn’t know this specific person was gonna say that. [My mom told me that] she didn’t think I should put myself in that situation. I just feel like talking with my mom about it helped. Nobody should feel like that less of a human than anyone else.”

That same day, she made an Instagram post. While the caption described the bumpy wave of emotions she felt in the wake of the racist comment — from hatred to acceptance to forgiveness — the picture is contrastingly upbeat, displaying her sitting in the driver’s seat of her car with a smile, head tilted, her braided silver hair framing her dimpled face.

The day after she made the Instagram post, Diew went to practice in Hinkle Fieldhouse. Her teammates had already flooded her phone with texts, asking if she was okay and sending her prayers, but they wanted to talk to her in person. After practice, in the locker room, Diew sat down with her teammates, Okako Adika, Genesis Parker, Annilia Dawn and Upe Atosu. Tears running down her face, she explained what happened.

“When you talk about it, it’s like it’s exiting from your body,” Diew said. “Being vulnerable, that was the whole conversation.”

Diew’s teammates helped her contextualize the situation. Adika was especially outspoken; having experienced racism and discrimination throughout her journey from Denmark to Butler, Adika told Diew to focus on herself and be the best person she can be.

“I know that it’s hard when people look down on you, or people have something bad to say about you,” Adika remembers telling Diew. “But in this world, there is no place to take revenge on other people. All you gotta do is be the greatest version of yourself and other people will adapt to that. And then, the world will be a better place to live in.”

Diew said advice from her teammates, as well as from her family and boyfriend, helped.

“[The incident and their advice] reminded me to treat everyone with kindness,” Diew said. “Saying hi and smiling because you never know what happened to someone during the day. I prayed for her and let it go. It was hard to move on that day, but I moved on.”

During practice in mid-December, Butler women’s basketball head coach Kurt Godlevske could tell Diew was not herself. She was quiet. Too quiet.

Sensing her discomfort, Godlevske called Diew into his office and asked what was wrong.

Tears running down her face, Diew opened up about the racism, her cousin, the team’s losing record and her struggles from a second ACL tear she’d suffered during the summer.

Because of all this, Diew admitted to Godlevske, she longed for home.

Understanding her difficult circumstances, Godlevske obliged. Diew hopped on the next flight home to Sioux City. When she arrived, her family took her out to dinner at Chick-Fil-A, her favorite restaurant. Her brother, Bie Ruei, remembers Diew chowing down on her go-to meal, a chicken nugget eight-piece with barbecue sauce and a Sprite.

“She was just happy to be home,” Ruei said. “It just felt like normal again. We had her whole family back together, doing what we always did growing up.”

When she glances at the framed portrait of her and her cousin in her room, Diew tries remembering. Remembering less about his death, more about his life.

In memory of him, Diew is trying to channel her grief into positivity, or as she puts it, setting “little goals for us.” Take graduating high school. When she walked across the stage and posed with her diploma, she did so with his diploma, too.

At Butler, she carries on her cousin’s memory with her. Every time she steps between the white lines on the basketball court, she aims to “always play hard, always give effort.”

“Because that’s one thing he always did: he always gave effort, he always cared for other people,” Diew said.

She also dedicated her first start at Butler to her cousin, a home game against Providence on Dec. 5, 2020.

Diew learned she was going to be a starter three days before the game. When she heard the news, she thought every move had to be perfect, flawless. He would want nothing less. Elbows in. Feet aligned. Eyes locked on the basket.

She prayed for her cousin on two separate occasions that day — during the team’s regular prayer session in the locker room — and minutes before the game. As the Star Spangled Banner blared over the loudspeakers, Diew recited a prayer in her head.

“Dear heavenly father, I pray for safe travels for everyone, I pray for my teammates and my opponents, no injuries, we have fun,” Diew said. “And I pray that you lay a hand over me, and I pray that you continue to keep smiles across my family’s face. Thank you for all you do. Please keep watching over my cousin. Amen.”