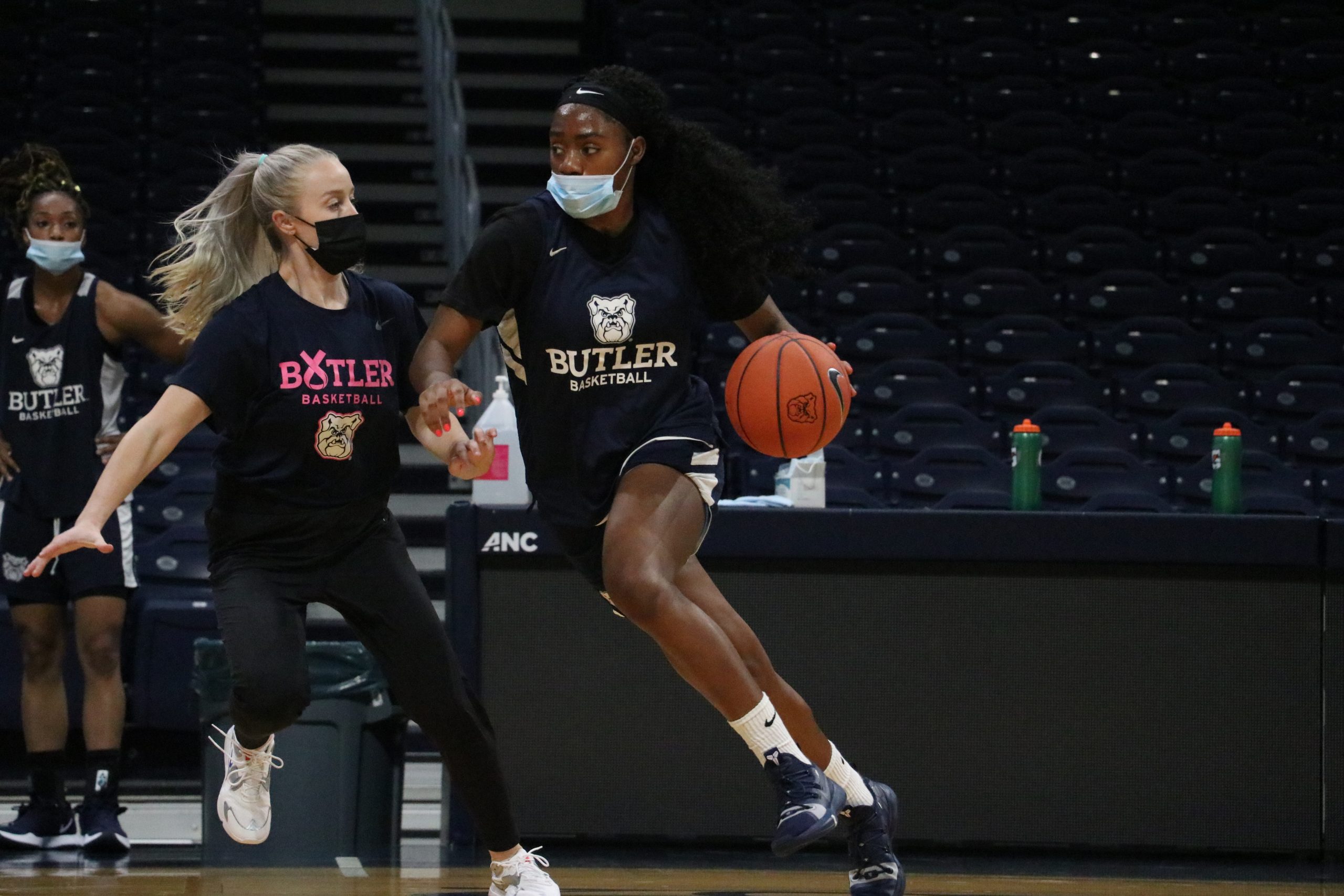 Junior guard Okako Adika drives to the rim in practice earlier this month. Adika looks to make a unique impact for the Bulldogs this season. Photo by Blake von der Lippe.

Every Friday, the Butler women’s basketball junior guard has a long class from 1 p.m. to 3:30 p.m., treatment before practice at 3:45, then practice. Leaving no time for lunch.

Sitting on the second shelf of her locker, on one Friday in early October, was a brown bag. In it, Dawn found a tuna sandwich. Who had left her lunch?

The answer: her teammate Okako Adika.

Adika, who averaged 11.3 points and 6.9 rebounds in her last year for Odessa College before transferring to Butler, has turned delivering lunch to Dawn into a weekly tradition. Whether it’s a tuna sandwich, pasta with shrimp and chicken or a peanut butter and jelly sandwich, Adika takes solace in feeding her teammate.

“That’s a perfect example of who she is,” Dawn said. “She will study you silently and then however she feels like she can help you, she’ll go to whatever length to help you.”

Adika and Dawn officially met two and a half weeks before Butler’s official move-in date this year, when they stayed in a nearby hotel. Their relationship solidified as roommates in the Apartment Village.

There, in their living room, the transfers traded stories of their time at their junior colleges, which were only 30 minutes away from each other in Texas. Odessa didn’t want to guard Dawn. Midland College didn’t want to guard Adika. A rivalry morphed into a friendship.

Adika has also shared more serious experiences with Dawn. Like when she moved from Denmark to Texas. That was two years ago. She didn’t know anyone in America. She had heard things. Terrible things. So, for the first month in Texas, she stayed in her room. She was scared. Scared that Black people in Texas were not accepted, that something was going to happen to her. When they had night classes, she often asked her whole team to walk with her. Being alone — the mere thought of it — terrified her.

“I think those conversations that I’ve had with her — of course, they’re terrible, they’re not stories you want to hear,” Dawn said. “But I think they’ve molded her and made her into who she is today.”

Basketball as a Sanctuary

Adika was six when her family emigrated from the Congo to Denmark.

The Second Congo War and the corruption, violence and danger it engendered forced 1.2 million Africans — including the Adika family — to find refuge elsewhere.

Denmark has long welcomed a large number of refugees. But once those refugees enter the country, they find themselves needing to assimilate into a culture that demands sameness, secularism and egalitarianism. Although Denmark is widely considered to be one of the most empathetic, progressive and socially equal countries in the world, Adika’s experiences paint a different picture.

The Adika family — her mom, uncle and six sisters — was the first Black family in a town of 20,000 called Holstebro. Adika and her older sister were the first Black people in a 600-student school called Lemvig Gymnasium. Every day for the 10 years she lived in Denmark, Adika said, she experienced some form of racism, starting in kindergarten when classmates made remarks such as, “What are you doing here? You don’t belong here. You can’t be here. You can’t stay here. You have to go home. You don’t look like us.”

Another moment: one day, as a 10-year-old, Adika was sitting alone at a cafeteria table, chowing down on Moambe chicken, a traditional Congolese dish, when a group of Danish students walked up to her.

“What are you eating? You can’t eat that kind of food. It’s not our culture,” Adika remembers the Danish kids telling her.

Then, the Danish kids picked up Adika’s tray of food and threw it in the trash. Angry, Adika shoved the girl, took her bag and dumped all her books in the trash. The girl jumped at her. Adika shoved her again. Then, boom! In a split-second, the fight grinded to a halt: the girl was sobbing on the ground, Adika towering over her. Adika was suspended. The bullies were not.

Her mom introduced little Okako to basketball when she was 10 years old. The basketball court became a sanctuary, a lifeline for Adika. She could escape, forget about the racism, the discrimination, the hatred.

In seventh grade, Adika made the 16U Danish National Team. Her teammates welcomed her as one of their own. For the first time since living in the Congo, Adika felt like she was treated equally. Not so much, however, when games rolled around. It was then that she found out that she couldn’t play in games for the Danish National Team because she lacked a Danish passport. In response, coaches, thinking she was too good not to at least compete in practice, had her sign paperwork for a temporary passport for refugees. Numerous efforts to obtain a Danish passport, to this point, have failed.

“[The Danish Government] admired me for my talent, but not for who I am,” Adika said. “[Basketball] helped me a lot. When I started to play for the national team, people had more and more respect for me. I was the most athletic player on my team, so people started to respect me more and see me as equal to them. But [I was respected] just because of my talent, and it shouldn’t be like that.”

When then-Odessa College assistant coach Denise Rosario walked up to Adika after a game in Lemvig Gymnasium two summers ago, Adika, then a senior in high school, asked her question after question.

Rosario assured Adika that she would figure out her visa issues, that her scholarship was guaranteed, that she was going to live in a dorm — that she would be welcomed at Odessa, a city tucked between Dallas and El Paso.

For Adika, the transition from Denmark to Texas in 2018 was difficult. Being too scared to leave her room for the first month was the first — and most detrimental — issue. Another issue was the language barrier. While Adika was fluent in English by the time she came to Odessa, the subtleties confused her. Where Danish people were more direct with their dialect, Americans were more careful. In one of her first days at Odessa, she addressed a teacher by her first name instead of by professor and doctor — to her chagrin.

Not to mention finances. To scrape by financially, Adika bussed tables in the cafeteria, worked in the library and in the police office as a security guard.

Despite the adjustment, Adika shined on the court, coming off the bench to average 6.1 points per game. In one game, she hit two three-pointers to lead the Wranglers to a win in the regional championship final.

During her second season there, she stopped questioning. Started believing. Spent more time in the gym. Even after morning practice, a day full of classes and study hall, Adika could be found in the gym, firing shot after shot, Ara Baten, then-Odessa College head coach said.

That season, Adika led the team in points and rebounds on her way to earning first-team NJCAA all-American last year for Odessa College, spearheading the Wranglers to a 23-9 record and conference championship before their season was cut short to the COVID-19 pandemic.

In her second year at Odessa, she also became more comfortable off the court. Her relationships with coaches and teammates sharpened. She confided in Rosario, especially during study halls. Come Christmas, Adika and the seven other international students, unable to go home due to their hectic practice schedule, celebrated at Rosario’s house. Talking points ranged from school to family to socioeconomic differences to racial discrimination. Among other experiences, Adika shared that she had been discriminated against at a tournament in China three years prior. Adika finally felt like she fit in.

The transition to Butler

In the Efroymson Gym in late September, Butler head coach Kurt Godlevske blew his whistle. Butler was in their first week of practice, focusing on offense, running three-on-three and four-on-four scrimmages. Adika barely looked at the basket, much less fire away. So, after blowing his whistle, Godlevske walked up to Adika.

“Listen, I appreciate your unselfishness, your getting people other shots, but you’re also passing up shots, and you’re a really good shooter, and an excellent scorer, I need you to score,” Godlevske told Adika.

Two weeks later, in the same gym, Godlevske blew his whistle again. Butler was in their fourth week of practice, focusing on defensive techniques. Adika was forcing middle instead of forcing baseline, the correct tactic in Butler’s defense. The next play, Adika adjusted her footwork.

“She’s good with that, just like I said. Anything, if I go to her and say, ‘this is what you’re doing and this is what I need you to do,’ she’s gonna go, ‘okay. I’ll do that,’” Godlevske said.

It was practice in late November. The Bulldogs were exhausted. They had been competing against each other since July. It was a long practice. The final drill was upon them: five-on-five. It was blue team versus white team, and the blue team was down 4 to 6. Adika was on the blue team. There were three more possessions until practice ended.

“Hey y’all, let’s go, we got this, three more possessions, finish out strong!” Adika yelled to her teammates on the sideline.

And the blue team won.

“I thought that was perfect timing because, you know everyone’s focusing on just getting through the drill rather than fighting through the fatigueness, and actually getting better,” Dawn said.

While transitioning to Butler was a “little overwhelming” in the beginning for Adika, she has since been “awesome,” Godlevske said. He met Adika last year when attending a junior college jamboree in which Adika was competing, where he fell for her “multidimensional skill-set.”

“She can shoot the three, she’s explosive on-the-bounce, she can post people up, she’s a very active defender, can guard multiple positions,” Godlevske said. “She’s gonna be somebody who is going to give a lot of people in the Big East problems because of her height, length, quickness and her ability to shoot the basketball.”

Off the court, Adika continues to promote the racial injustices Black people face everyday. In the wake of George Floyd’s death on May 25, 2020, Adika posted a black box on Instagram as part of the #blackouttuesday hashtag trending, alongside a Nelson Mandela quote from his best-selling book Long Walk to Freedom.

On May 29, she retweeted a video from Sportscenter of Stephen Jackson, former NBA player and George Floyd’s childhood friend, speaking to reporters about systemic racism.

Not only does Adika post messages on social media, she also offers advice to those closest to her. Although more immigrants from Africa have found refuge in Denmark, Adika said the culture has not changed much since she moved away four years ago. Take, for example, her nephews. Living in Holstebro, the 12-year old siblings experience racism as Adika did at their age. They notify their teachers and the school president, confide in their parents — to no avail. So they turn to Adika for guidance.

Like her mom did for her, Adika encourages her nephews.