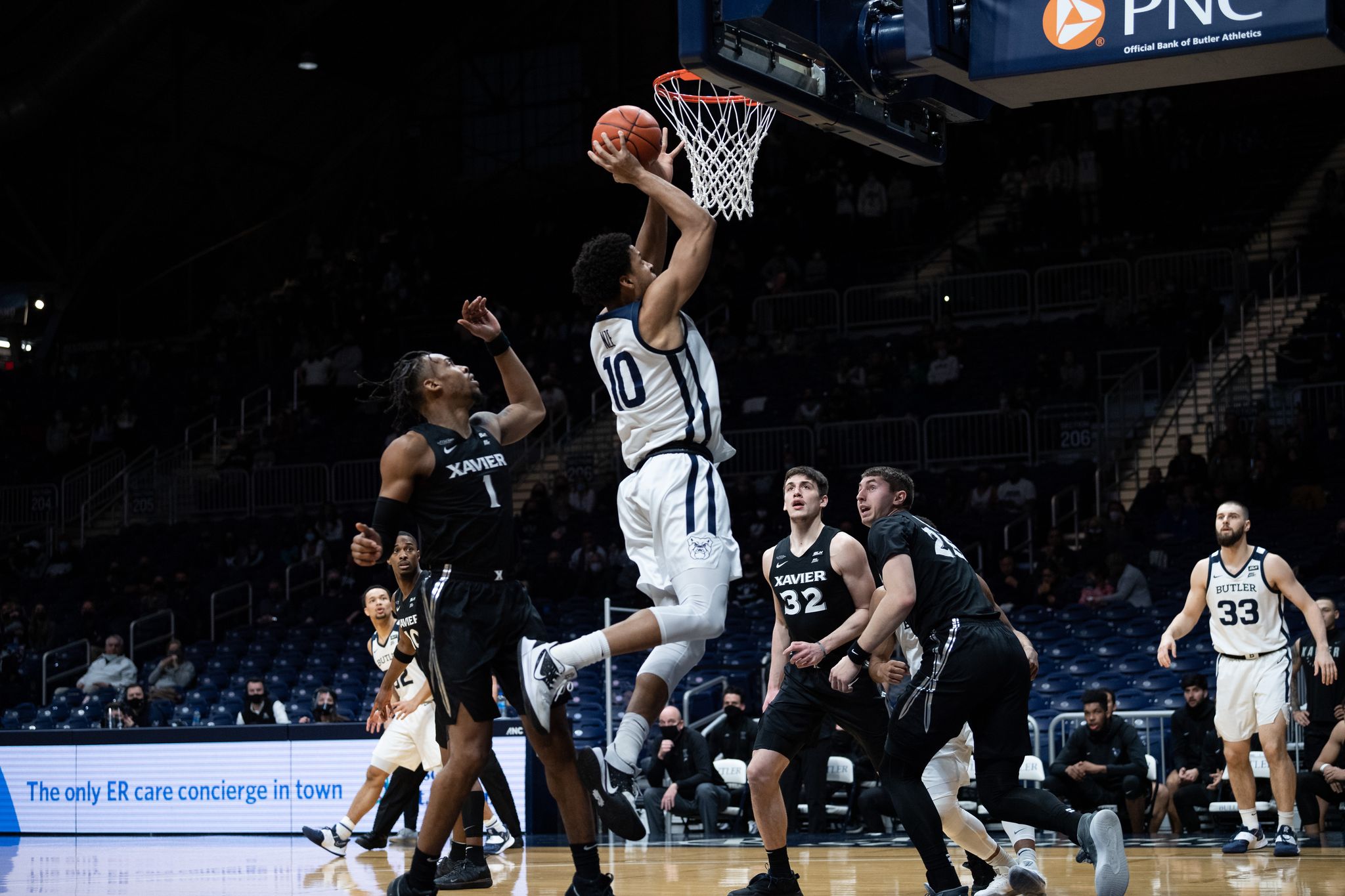 Bryce Nze rises for a layup attempt in Butler’s loss to Xavier on Jan. 30. Nze is questionable for the Bulldogs’ matchup with the Musketeers at the Big East Tournament in New York. Photo by Zach Bolinger.

After winning in both matchups versus Xavier in 2020, the Butler men’s basketball team is hoping the third time’s the charm after losing both meetings with the Musketeers. Since playing some of their best basketball of the season in wins over Seton Hall and Villanova, Butler allowed 93 points in a loss at Creighton on Saturday.

With the regular season now behind them, the Bulldogs turn their attention to the Big East Tournament in Madison Square Garden. Butler will be playing its first game in the Big East Tournament since 2019 as their quarterfinal game versus Providence last year was cancelled less than two hours before gametime due to the emerging COVID-19 pandemic. The Musketeers fell to DePaul in the first round of last year’s tournament.

The winner between Butler and Xavier will advance to the Big East quarterfinals, where they will face No. 17 Creighton. Bo Hodges and Bryce Nze are questionable for the game. Here’s what you need to know as the Bulldogs and Musketeers meet for the first time in the Big East Tournament since 2017:

1. It’s been a roller coaster season for the Musketeers

On Dec. 21, Xavier was 8-0 and ranked No. 22 in the AP poll. The Musketeers had just come off a three-point win over Marquette after an 11-day COVID-19 pause and were traveling to Creighton for a game between two nationally ranked teams. Since then, Xavier has had much greater difficulty finding their stride in large part due to multiple COVID-19 pauses. In a 32-day span between Jan. 11 and Feb. 12, the Musketeers’ only game was their 68-55 win over Butler at Hinkle Fieldhouse.

Now, Xavier finds itself as the No. 7 seed in a relatively weak Big East and in the thick of the NCAA Tournament bubble conversation. According to Bracket Matrix, an aggregation of NCAA Tournament projections from experts around college basketball, the Musketeers are the last projected team into March Madness as a 12-seed. Xavier has won just three of its last eight games since Jan. 10, but could potentially play both teams they defeated in that span in their first two games in the Big East Tournament. The Musketeers swept the regular season series against Butler and defeated then-No. 13 Creighton, 77-69, on Feb. 27. With their season trending in the wrong direction at this time of year, Xavier has a huge opportunity to turn it around. A third win over Butler is a must to pursue those hopes of an NCAA Tournament appearance.

2. Xavier has a variety of offensive options

The Musketeers have not exactly been lighting it up from 3-point range. Their 28% shooting mark from deep is dead last in the Big East. Despite their inability to make 3-pointers consistently as a team, Xavier sports sharpshooters who can give the Bulldogs problems if left open. In the Musketeers’ win over Butler on Jan. 30, Adam Kunkel, Paul Scruggs and Nate Johnson combined to shoot 9-for-11 from long range, while the rest of the team shot 1-for-9 from 3-point territory. Johnson, in particular, is especially effective from that part of the floor, having knocked down over 45% of his 3-point attempts this season. Given his 3-point prowess, his 0-for-6 performance from deep in that home win is an anomaly.

In addition to some key perimeter shooters, the Bulldogs must focus on controlling the glass. Butler and Xavier are first and third in the Big East preventing their opponent from grabbing offensive rebounds, respectively. Given that neither of their two regular season games was able to surpass 125 total points, extra possessions will be key to getting a leg up in this game. The Bulldogs and Musketeers also each average less than 12 turnovers per game, furthering the importance of capitalizing on opportunities to gain more possessions.

Xavier’s strong perimeter shooting from Johnson and team rebounding has made Paul Scruggs all the more successful. The Indianapolis native earned All-Big East Second Team honors after averaging 14.2 points, 5.8 assists and 1.6 steals per game. Since Aaron Thompson remains out for the season with a shoulder injury, it will be a group effort to limit Scruggs offensively. On Jan. 30, Scruggs scored a game-high 24 points in a night where leading scorer Zach Freemantle was off his game.

3. For Butler, the game will be won or lost based on offensive efficiency

What’s been the recurring theme through these teams’ first two meetings? Butler’s inability to put the ball in the basket. The Bulldogs converted 34% of their field goal attempts on Jan. 30 and an even worse 29% on Feb. 21. Two of the four lowest scoring outputs for Butler this season came against these Musketeers. It’s not like this Xavier defense is world-class, though.

In their first five games returning from their extended COVID-19 pause, Xavier allowed every opponent not named Butler to score 80 or more points. The Bulldogs’ snail-paced tempo has a little bit to do with that, but for whatever reason, Butler has had two of its worst offensive performances of the season against their rivals. Look for Chuck Harris to help change that trend in Madison Square Garden. Harris, who was announced as a unanimous selection to the Big East All-Freshman Team, has scored in double figures in eight of his last nine games. In two matchups against Xavier this season, though, Harris made just five of his 23 field goal attempts. Coming off a career-high 29 points, expect Harris to play at MSG with confidence.