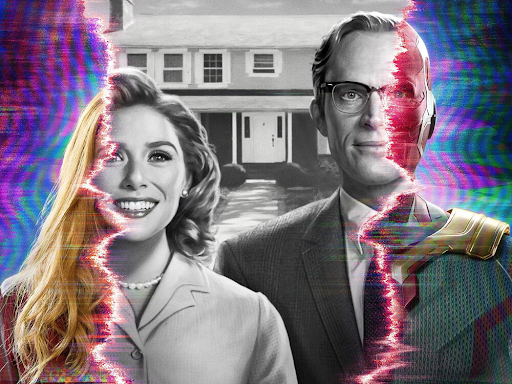 Warning: this article contains spoilers for “WandaVision” and “The Falcon and the Winter Soldier.”

After enduring a lack of content in 2020, Marvel fans can finally rejoice to this year’s release of “WandaVision” and “The Falcon and the Winter Soldier” on Disney+. The former just wrapped up its nine episode run on March 5 and acts as the triumphant return to the Marvel Cinematic Universe, or MCU, after the 23 intertwined movies that spanned from 2008 to 2019.

The company splits their movies into phases, with “Phase One” setting up the original Avengers movie and “Phase Two” introducing other important characters such as Wanda and Vision. “Phase Three” of the MCU ended with the three-hour-long blockbuster film “Avengers: Endgame,” featuring nearly every character in the universe, no matter how big or small a role they played.

“WandaVision” is the first Marvel content in “Phase Four.” This new phase will most likely hone in on the conflicts and traumas that superheroes face now that the “Infinity Stone” storyline of the first three phases has wrapped up. This is a prevalent theme in “WandaVision,” which revolves around Wanda’s grief from losing Vision in “Avengers: Infinity War.

One small show for viewers, one giant step for Marvel

That said, “WandaVision” isn’t quite like anything Marvel has ever created. The series revolves around “Avengers” characters Wanda Maximoff, played by Elizebeth Olsen, and Vision, played by Paul Bettany, living in a faux-sitcom world that Wanda created. Almost every episode represents a different time period in television history, from the monochromatic 50s and 60s inspired by “I Love Lucy” and “The Dick Van Dyke Show” to more current 2000s hits such as “Modern Family” and “The Office.”

Each time period is beloved by fans for different reasons. Junior English major Louise Irpino said she is a huge fan of late 80s sitcoms like “Full House.” However, her favorite era portrayed in “WandaVision” has to be the late 90s and early 2000s episode, titled “All-New Halloween Spooktacular!”

“I liked the 80s episode, but I think my favorite was the 90s, early 2000s,” Irpino said. “Whatever the “Malcolm in the Middle” inspired one was. I really enjoyed the Halloween special, especially with the comic book costumes and how funny the fourth-wall breaking was.”

In contrast, junior pharmacy major Reilly Livingston prefers the 80s inspired episode titled “On a Very Special Episode…” because it is a critical turning point for the show.

“WandaVision” received favorable reviews from critics, with the average rating being 77/100 on Metacritic. Many Butler students are raving about it too, with each student enjoying the show for various reasons. Kayla Miller, a first year education and history double major, loved the development of both Wanda’s character and the show as a whole.

“I’ve always been a very big fan of Wanda’s character,” Miller said. “I was excited to see how they would develop her more throughout this show. I really like the beginning… and how it was an ode to sitcoms. Then it developed into this crazy Marvel finale.”

Another reason fans enjoyed “WandaVision” so much was the show’s magical villain Agatha Harkness, played by Kathryn Hahn, who is accompanied by her banger of a theme song “Agatha All Along.” Irpino said she was impressed with how well the song — written by Kristen and Robert Lopez who wrote the hit “Frozen” number “Let it Go” — fits with Harkness and the MCU as a whole.

“I think the song was brilliant,” Irpino said. “Wherever they got the idea to hire the “Frozen” songwriters… that was genius. Marvel is already cemented in pop culture, but getting a song in there really blew everything up.”

The show’s supporting characters are also receiving a lot of attention. Most are recurring characters from other Marvel movies, including Darcy Lewis, played by Kat Dennings, from “Thor,” a grown-up version of Monica Rambeau, played by Teyonah Parris, from “Captain Marvel” and fan-favorite Jimmy Woo, played by Randall Park, from “Ant Man.” When asked who her favorite supporting character was, Livingston instantly chose Woo, because she loved seeing a side character grow to be so popular.

Enter “The Falcon and the Winter Soldier”

Now that “WandaVision” has wrapped up, Marvel fans only had to wait two weeks before the next Disney+ series: “The Falcon and the Winter Soldier.” Only one episode has been released so far, but fans are speculating that the show will delve into the post-Endgame lives of Sam Wilson (Anthony Mackie), better known as the Falcon, and Bucky Barnes (Sebastian Stan), an ex-assassin known as the Winter Soldier.

“They’re both recovering from various things,” Livingston said. “In ‘Infinity War,’ Sam was one of the people that ‘blipped’ away. Then Bucky has… you know, been an assassin for ninety years and is still trying to rejoin society.”

The MCU has developed into a self-contained world with multiple overarching storylines and characters. Marvel will most likely continue to crank out sequels, spinoffs and superhero team-ups to flesh out their universe until we’re all dead. Diving into the MCU in 2021 might be a daunting task, but “WandaVision” and “The Falcon and The Winter Soldier” establish a good place for new fans to emerge. Even Miller, who has been a Marvel fan for many years, said her guess is as good as anyone’s on where “The Falcon and the Winter Soldier” will go as a show.

“I’m pretty much going in blind,” Miller said. “I think [the first episode] set up some interesting concepts with Bucky’s PTSD and introducing Sam’s family, but I don’t really know where that’s going to go in the next couple episodes.”

Marvel also introduced a series of shorts on Disney+ titled “Marvel Studios LEGENDS,” which recaps the history of characters in the new shows. So far there are shorts about Wanda, Vision, Falcon and the Winter Soldier, each about eight minutes long. These are perfect for new fans who want to watch the series but don’t want to watch all the movies in a 50 hour marathon.

Catch the next episode of “The Falcon and the Winter Soldier,” or go watch “WandaVision” if you haven’t yet, on March 26, streaming on Disney+.