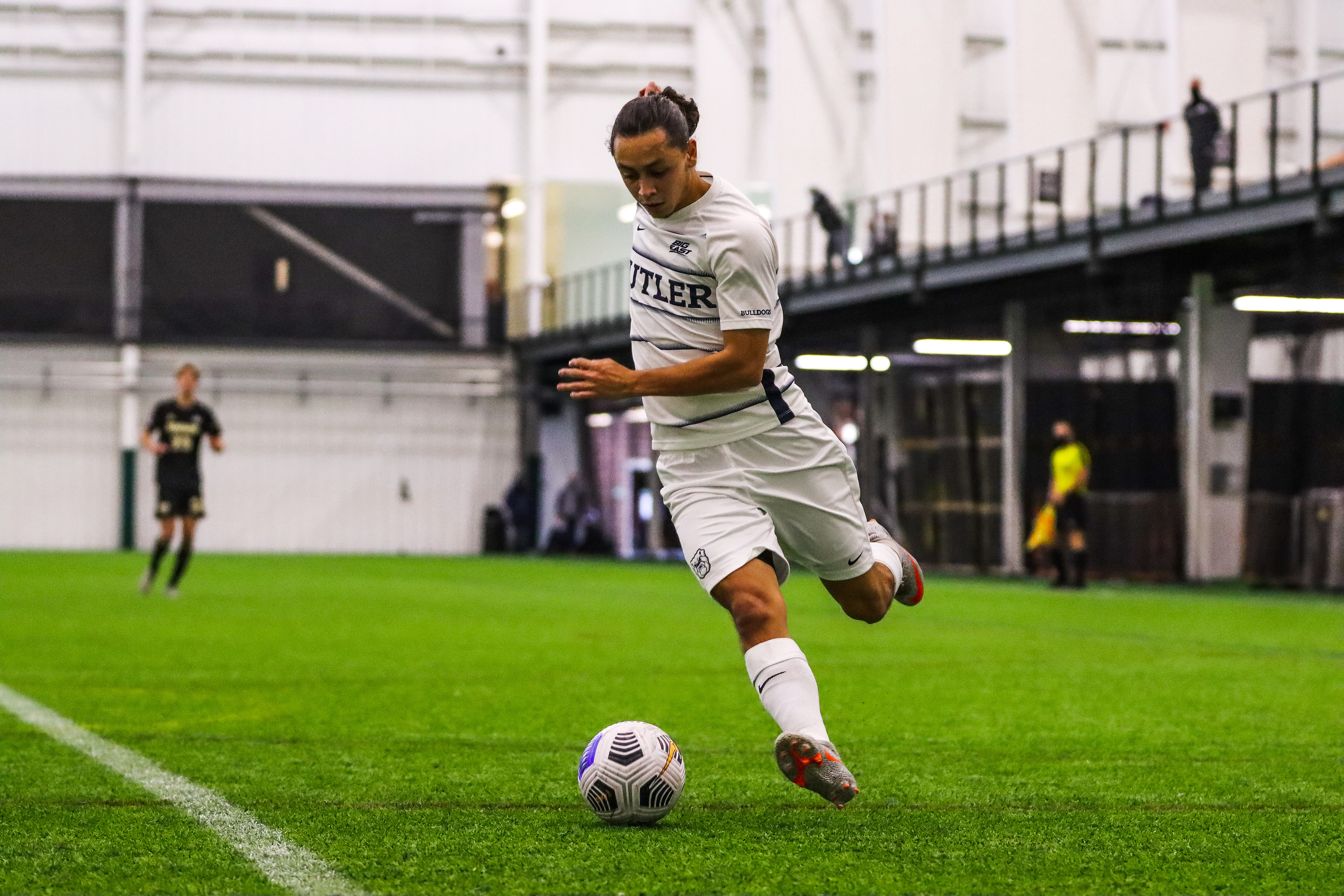 Wilmer Cabrera goes for a left-footed cross in Butler men’s soccer’s loss to Western Michigan earlier this season. Cabrera is scoreless through four games this season. Photo by Chandler Hart.

After completing their non-conference schedule without a win, the Butler men’s soccer team hopes to start the Big East season right, as they take on DePaul today at the Sellick Bowl.

Projected to win their side of the Big East, this Butler team has experience and potential that has yet to shine this season. Competing in the Midwest division is Butler, Creighton, Xavier, Marquette and DePaul. As Butler sits atop of the preseason polls, their opponent in DePaul is predicted to finish last.

“We’ve got to go in with the mindset and focus of going and winning the Midwest division, which I think we’re capable of,” Snape said. “There’s some good teams but we’ve played a really hell of a schedule with these four games and it’s prepared us for the Big East.”

Mark Plotkin returns for his third season as DePaul’s head coach. The former four-year starter for DePaul finished his first and second seasons with a combined record of 10-18-6.

DePaul has started the spring 2021 season with two draws which were played at a neutral location in Rockford, Ill. The first finished in a 2-2 scoreline against Northern Illinois while the second in a 0-0 stalemate with Loyola-Chicago.

Last season, the Blue Demons finished at the bottom of the Big East with only one win in conference play. Their one matchup with Butler ended in a 2-2 double overtime draw.

The graduation of captain and senior defender Max de Bruijne, a 2019 First-Team All-Big East selection, leaves a large void in the heart of the DePaul defense. The senior defender was the leader and anchor for the Blue Demons.

Junior defender Michael Lantry, a transfer from Syracuse University, and sophomore defender Dan Iscra will share the responsibility of filling in for de Bruijne. Lantry had limited playing time at Syracuse, but has started the first two games for DePaul. Iscra, on the other hand, made 17 starts for the Blue Demons in his freshman season and can build off last year’s game time.

A struggling Butler attack against an unproven DePaul defense will serve as an interesting matchup. Butler’s attack will look to get back on track while DePaul will hope to show they are still a formidable defense without de Bruijne. Sophomore forwards Wilmer Cabrera Jr., a preseason All-Big East selection, and Hemi Nasser have only scored a combined one goal this season. For the Bulldogs to turn their season around, the two sophomores must get back to scoring goals.

“Having Hemi and Wilmer, you can put confidence in them to kill games off for us and win us games so it’s important,” Myers said.

DePaul returns their leading goalscorer in junior Jake Fuderer. The forward scored only four goals and had four assists but led the team. Fuderer has gotten off to a quick start this season scoring DePaul’s only two goals. Butler’s experienced defense must be aware of the junior forward as he makes the Blue Demons a threat going forward.

The Bulldogs shouldn’t overlook a sneakily tough DePaul team, but could use this game to spark an otherwise slow start to the season. The Butler defense would love to keep a clean sheet, something they haven’t done this year, against a somewhat weakened DePaul attack.

While Butler would certainly prefer their forwards get back on the scoresheet, if they continue to struggle, their defense needs to step up.

Sophomore defender Perrin Barnes said their goal of winning the Big East championship is dependent on their defensive staunchness.

“Finish first in the Big East — that’s number one,” Barnes said. “To help do that we need to get clean sheets, concede as few goals as possible.”

Looking ahead in the Big East regular season, Butler will play Marquette at the Sellick Bowl on March 10. The Marquette game is followed by Xavier at home and away at Creighton to finish off the Bulldogs’ first four conference games.

Marquette is placed at second to last in the preseason polls. The last time Butler and Marquette faced off in 2019, Butler lost 3-2 at Marquette.

The Bulldogs have a great chance to jump out to a two-win start in the Big East with games against weaker opponents in DePaul and Marquette. Time is running out for the Butler team to get back to winning ways and unlock the potential that earned them preseason Big East favorites.