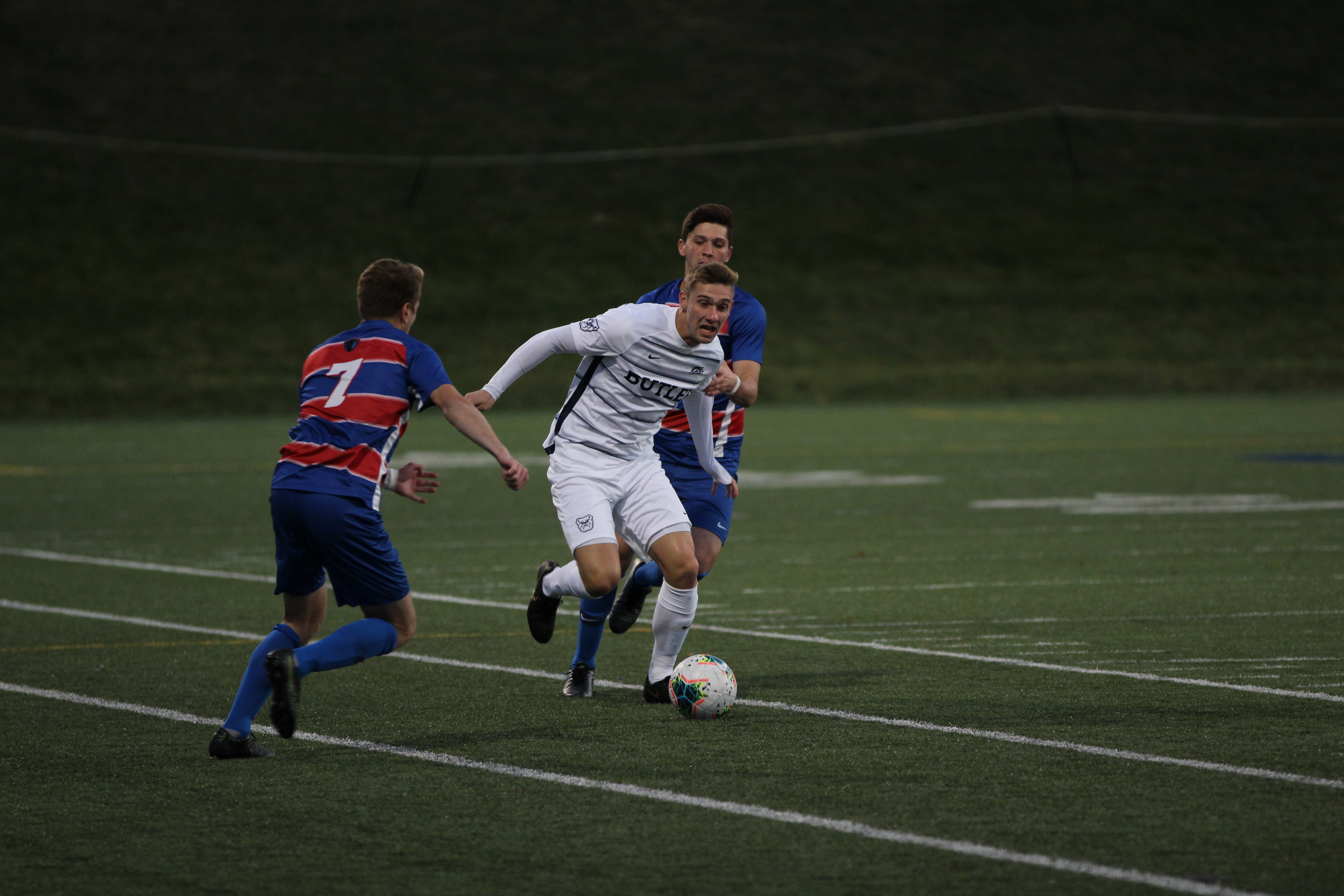 Jared Timmer maneuvers through two DePaul defenders. After struggling with an injury, Timmer scored a goal in his first game of the season against the Blue Demons. Photo by Chandler Hart.

After the game, the Butler men’s soccer team huddled for a brief talk, before sauntering off the pitch to the locker room. On Oct. 12, Butler tied DePaul 2-2 in overtime. Butler moves to 6-4-1 on the season, while DePaul moves to 4-5-3.

With 32 seconds remaining, Butler senior midfielder Derek Sutton was whistled for a foul. It happened in the left corner of the box. From behind the DePaul forward, he slid. In doing so, he seemed to tip the ball but also caused a DePaul to fall. DePaul senior defender, Max De Bruijne, knocked the ball into the left side of the net to tie the game.

To Butler junior defender, Rhys Myers, it felt “more like a loss than a draw.”

“The referees screwed up,” Myers said. “Today, he made a bad decision, that costs us really. We should have all three points, instead of the one. Maybe we should have scored more goals to put the game to bed. It’s disappointing, to be honest. Feels more like a loss than a draw.”

If not for the penalty kick, the narrative would have taken a more positive spin.

In his first game of the season, Butler senior midfielder Jared Timmer scored a goal in the 77th minute. Having also redshirted the 2017 season, the goal represented a culmination of hard work and dedication.

On a corner attempt from Wilmer Cabrera Jr., Timmer headed the ball into the left corner of the net. After he scored, he ran to the corner flag. All the Bulldogs — even those on the bench — embraced him, jumping up and down and cheering.

Coach Paul Snape called him a “warrior,” and that his goal should have been the game-winner.

“He’s had a lot of difficulties, a lot of adversity, the poor guy,” Snape said. “He suffered, two years ago, he suffered a horrific season-ending injury. He was tired tonight, you could see it. But he fought on. For him to score was great. We should have won the game.”

Butler started strong, creating offensive chances while stifling DePaul’s attack. The first action was a goal that was disallowed by the referees.

Five passes were made in the box before Brandon Guhl snuck behind DePaul’s defense, near the left post and tapped it in. At halftime, Snape and the assistants reviewed the film of the play. Snape said they found Guhl to be at least “three, maybe four feet onside.”

The first official goal came in the 18th minute, from DePaul sophomore forward, Jake Fuderer. It came from 14 yards out, in the bottom left of the net. Butler created six shots in the first half and two corners, while DePaul had two and zero, respectively.

In the 48th minute, Butler senior midfielder Derek Sutton scored Butler’s first goal. His first goal of the season (and second in his career) came on a breakaway opportunity. From 32 yards out, he fired the with his right foot.

At the end of regulation, Myers said Coach Snape had a simple message: “one goal and we win the game.”

“That’s what we did tonight, but we were unlucky; things didn’t go our way. Move onto the next.”

Butler’s next game is at Lipscomb on Oct. 16.