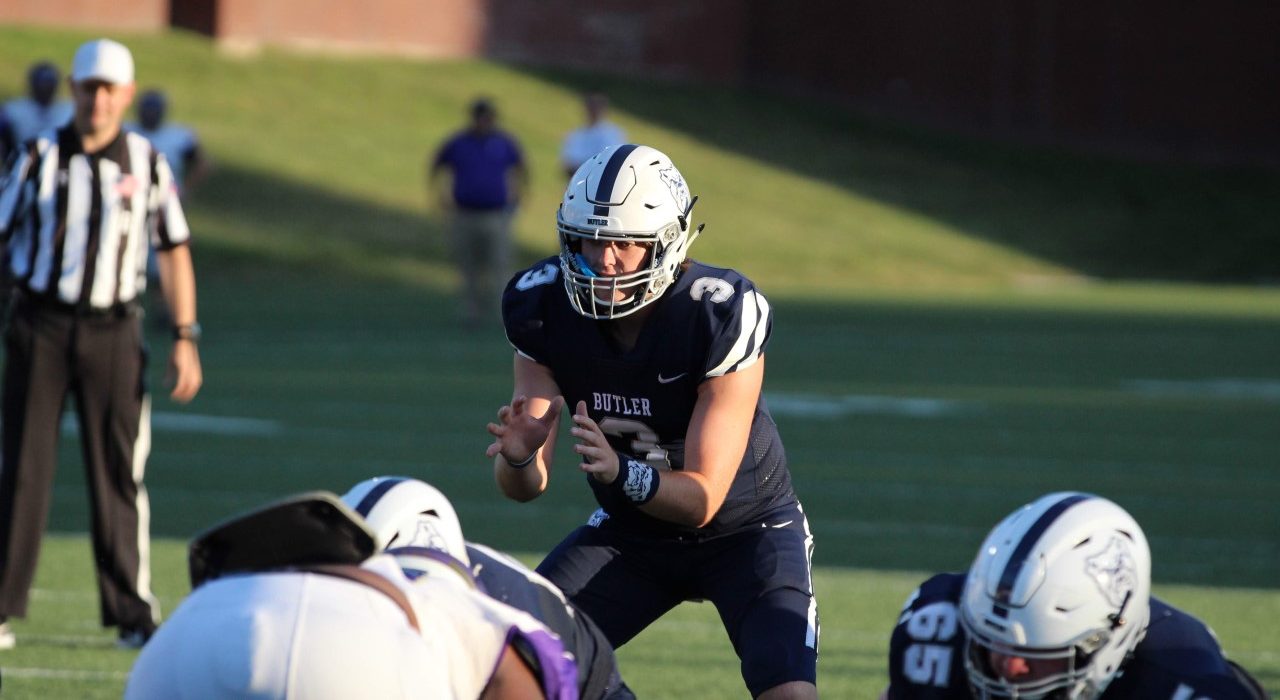 Quarterback Sam Brown prepares to take a snap in a game last season. The Bulldogs open up the 2021 season at home versus Valparaiso on March 13. Collegian file photo.

After a long 15 months of waiting, the Butler Football team will hit the gridiron for the first time since November 2019.

While this team will be younger than in previous years — with only two seniors on the roster — head coach Jeff Voris said they’ve had the blessing of additional time to prepare underclassmen with the season being moved to the spring.

“With the spring season, what you gain is an opportunity to continually develop your players — but for the younger guys, they get such an added advantage,” Voris said. “Usually, they’re in an August camp for a couple weeks, then the season starts and it’s hard for them to catch up. When you flip the calendar and have spring ball in the fall, it allows the younger guys to develop.”

Although the Bulldogs will have to rely on their younger talent, they won’t completely be left without guidance from their veterans on the team.

On the offensive side of the ball, the Bulldogs will again be led by redshirt junior quarterback Sam Brown, who led the team in passing yards last season with 1,293 yards and six touchdowns. While Brown missed some time in 2019 due to a MCL injury, he is fully healthy going into the season.

Brown will also be joined by an offensive line that has experience protecting him from opposing defenses.

Spetter, who was named to the Preseason All-PFL watch list prior to the start of the season, is the stand-out in the group. Although Spetter appreciates the recognition from around the Pioneer Football League, he credits his success to his fellow linemen.

“I appreciate the recognition the PFL coaches have given me but I am only as good as my teammates around me,” Spetter said. “The offensive line as a whole is one of the most talented groups in the league this season and I am proud to represent this group of guys.”

Even with Brown having an experienced offensive line surrounding him, he will be without many of his key contributors on offense from the 2019 season.

The Bulldogs will have to find a way to make up for the loss of running back Brad Sznajder and wide receiver Stephen Dennis — who were the team leaders in rushing and receiving yards, respectively.

Following in Sznajder’s footsteps at running back will likely be junior Kavon Samuels, who finished third on the team in 2019 with 242 rushing yards and two rushing touchdowns.

Luckily for the Bulldogs, they will also have redshirt sophomore quarterback Nick Orlando to lean on in the ground attack. He finished second on the team in rushing with 606 yards followed by a team-high 14 rushing touchdowns.

Although Brown’s return will diminish most of Orlando’s time, he will still be expected to play in some capacity to add to the Bulldogs’ ground game through the use of designed quarterback runs and gadget plays.

On the receiving end, Brown will be joined by familiar targets in redshirt senior Brad Huth, redshirt sophomores Johnny O’Shea and Nate Rusk — as well as a plethora of underclassmen at the position.

While it remains unclear who will emerge as the lead dawgs of the skill position groups, this is a process that the Bulldogs pride themselves on figuring out.

“The mentality the Butler football program has is next man up,” Spetter said. “Whenever there is a hole to be filled, the next player in line is expected to fill that role and then some. We’re a young team and year after year, young talent has helped our team win games. I expect nothing different this season.”

On the defensive side of the ball, the Bulldogs have lost key defensive leaders in Mason Brunner, Dan DelGrosso and Luke Sennett — who have been at the heart of their defense for the past few seasons.

Their absences will be replaced with upperclassmen in Bradley Magee, Mickey Kane and Devin Augilar.

Magee and Kane will hold down the linebacking core as the leaders of the unit. Kane makes his transition to outside linebacker after spending his first two seasons in the trenches at defensive end. They will also be joined by Malachi Pike and Eloi Bigirimana, who both made contributions at the position in 2019.

With Kane moving to linebacker, the defensive line will be headed by Jordan Caselberry and Michael Dunn, who both proved to be run stuffers for the Bulldogs in their prior season.

Aguilar will be only upperclassman in the secondary, as he will be the ringleader of 13 underclassmen at the position. He will be joined by sophomore Mike Manning who has been an impressive individual among his teammates.

Manning was chosen by his teammates to be one of the four captains for the 2021 spring season — the first sophomore to ever be chosen under coach Voris.

“It’s a complete honor to be named a team captain,” Manning said. “The team saw something in me as far as leading and doing things the right way, and I want to live up to everyone’s expectations and exceed them by being a great teammate.”

Although some of the talent on the defensive side of the ball is a bit wet behind the ears, all the members have been putting in the time and effort to create a bond as a unit.

“Day in and day out, our defense has been building chemistry while we’re on the field and off the field,” Manning said. “We talk about being accountable and being able to do your job. With that, we have built a great deal of trust and communication as well.”

After all the work the team has put in during the extended offseason, they will unfortunately have a short amount of time to demonstrate their growth in action.

The Bulldogs will only be playing in six exhibition matchups this season — exclusively against PFL opponents — home and away games against both Valparaiso and Morehead State, home versus Drake, and a trip out west to San Diego.

Even with this shortened season, the team isn’t taking their opportunity to play lightly. The team is savoring every minute they have to play the sport to which they’ve allocated so much of their time.

The Bulldogs will first take the field at the Sellick Bowl against Valparaiso University on March 13 at noon.